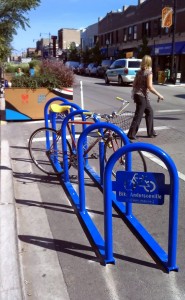 Local pundits like ex-Sun-Times columnist Mark Konkol and the Tribune’s John McCarron and John Kass have trashed the city’s new protected bike lanes as a waste of space on the streets. But Chicagoans tend to overlook the massive amount of room on the public way given over to moving and parking private automobiles.

“It’s not a top-down program where we come in and say, ‘We think you need a People Spot or a People Street,’” says Janet Attarian, head of the department’s Streetscape and Sustainable Design section. “Instead we say, ‘We want to help you build community and culture and place and, look, we just created a whole set of tools that wasn’t available before.’”

Actually, turning parking spots into miniature public parks is nothing new. San Francisco has over thirty of these green spaces, known there as “parklets,” and for several years Chicagoans have participated in PARK(ing) Day, a worldwide event where citizens cover metered spaces with sod, plants and furniture. Semi-permanent People Spots debuted in Lakeview and Andersonville in August. The former is located by Heritage Bicycles and Coffee, 2959 North Lincoln, and consists of sleek wooden flooring, planter boxes, tables and chairs. The Lakeview Chamber of Commerce funded it for roughly $25,000.

The Andersonville People Spot, at the T-shaped intersection of Clark and Farragut streets, has a funkier vibe with boxy blue benches made from recycled plastic and a small patch of sod set at a forty-five-degree angle that’s fun to sit on. A colorful abstract mural by local artist Ruben Aguirre decorates the street-facing side. Bankrolled by the Andersonville Chamber of Commerce and a Kickstarter campaign, the parklet cost about $20,000.

The Lakeview spot required removing two parking spaces and the Andersonville parklet displaced three. Due to the city’s much-hated contract with LAZ Parking, the concessionaire had to be compensated by creating new metered spots in other nearby locations. Both of these People Spots are seasonal—they will be removed in November and reinstalled in April. 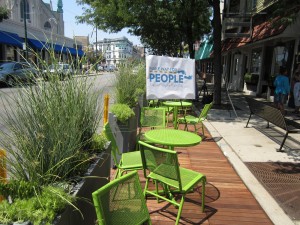 In September, two People Spots, similar in design and cost as the Lakeview parklet, opened in Bronzeville in front of Little Black Pearl Art Center, 1060 East 47th, and C’est Si Bon café, 643 East 47th. The nonprofit Quad Communities Development Corporation paid for both of the spaces, and no metered parking was removed.

Last week Pauline Watson was enjoying a snack and gazing at the sunset in the art center’s parklet as she waited to pick up her son from music and photography classes. “It’s a bit chilly today but this is kind of relaxing,” she said. “Especially if it was warm out this would be a really nice place to sit with friends and enjoy each other’s company.”

A related use of parking lanes that’s becoming more common here is on-street bicycle corrals, which free up space for pedestrians by moving bike racks from the sidewalk onto the roadway. A single metered spot can hold up to twelve cycles. Portland, Oregon, has over eighty of the corrals.

Chicago’s first on-street rack debuted in front of Wicker Park’s Flat Iron Building last year, and Andersonville got two corrals last month. One is next to the parklet and the other is in front of the Hopleaf tavern, 5148 North Clark. “It is very often full at night and has steady short-term use during the day,” reports the venue’s owner Michael Roper. Not everyone is a fan. “One cranky guy blurted out obscenities about it,” he says. “But I wouldn’t worry too much about what he thinks.”

Meanwhile, the People Streets initiative is turning blocks of side streets into vibrant public spaces. DePaul University approached CDOT about closing a block of Kenmore Avenue south of Fullerton Avenue in Lincoln Park, surrounded by campus buildings, to create something similar to Lincoln Square’s Giddings Plaza. To drum up community support while the block was temporarily closed for traffic counts, the school recently threw a block party with bike-repair classes, live music, chalk drawing and stilt walkers.

The Wicker Park/Bucktown Chamber of Commerce is interested in shutting down a dead-end block of Hermitage Avenue, between Milwaukee Avenue and the Blue Line tracks, to create a new plaza. Attarian says there’s also talk of doing a People Street in Pilsen. 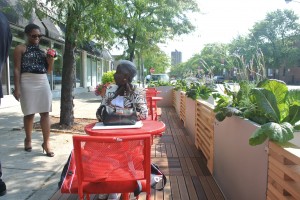 Chicago’s first People Alley is planned for Couch Place, a brick-paved passageway between State and Dearborn streets in the Loop, connecting the Goodman and Chicago theaters. Folks from a nearby condo approached CDOT about closing the alley so their kids and the public could recreate there. Several arts organizations also want to hold events in the space.

Attarian says the People Plazas program will take some of Chicago’s fifty-three-plus existing public squares and activate them with new programming. CDOT is working with community leaders in Pilsen to improve Tenochtitlan Plaza, the triangular space at 18th Street, Blue Island Avenue and Loomis Street, featuring an obelisk topped by the eagle and snake from the Mexican flag.

The department also plans to permanently close a snippet of Woodard Street between Kimball and Milwaukee avenues in Avondale to connect a triangular traffic island to the “mainland” next to Crown Liquors, 2821 North Milwaukee, creating a plaza with arts programming. “The Hairpin Lofts [arts center] is right across the street—they look down on the plaza—so it’s a natural pairing,” she says.

Make Way for People is just one aspect of Attarian’s work creating pioneering public spaces. She also spearheaded projects like the Millennium Park bike station and the ped-friendly Congress Parkway rehab, and she’s currently managing the city’s ambitious endeavor to build the Bloomingdale elevated greenway. What else is on her to-do list? “Oh, I don’t think I really want you to print all the things I have on my plate,” she says with a laugh. “Let’s just say I have a very exciting and fulfilling job.”

Travelon Gamelon Artist Richard Lerman will outfit twenty cyclists with specially made amplifiers to create a rolling performance-art piece as they pedal through Hyde Park. Call in advance to sign up for the ride. Saturday, October 13, Noon-3:30pm, 915 East 60th Street, (773)702-8596, vimeo.com/27629599; free.

Play Streets in Little Village The Southwest Side community hosts one of the many Play Streets events being held throughout the city through November, block parties that provide children and adults with supervised spaces for sports, games and dancing. Tuesday, October 16, 5pm-8pm, 3000 South Hamlin, (312)427-3325, tinyurl.com/chiplaystreets; free.

John – closing off a whole block of Kenmore is not like taking one parking spot for a People Place. Sheffield is already very congested and it will make Sheffield even more congested. DePaul already has a whole block of Seminary and has been no invitation to the neighbors to use this. Taking 47 parking spots away is a big deal for this neighborhood. The block party with bike repair classes, live music and chalk drawings you referred to was news to me. I was not invited. And I live less than 2 blocks from Kenmore and Belden. I don’t… Read more »

Thanks for the feedback Kathy. Look for a follow-up post about Kenmore this Friday on my transportation blog.

Why Was the State Street Pedestrian Mall a “Failure”? | Streetsblog Chicago

Kamin on Placemaking Efforts: The Food Is Terrible, and Such Small Portions! | Streetsblog Chicago

[…] to have a mix of sunny and shaded seating in a business district, and just southeast of the Hub on in front of Heritage Bicycles is a “People Spot” mini park, which get shade from nearby […]

The Case of the Missing Andersonville “People Spots” | Streetsblog Chicago

[…] only has a handful of them. Dubbed “People Spots” by the Chicago Department of Transportation, which runs the program, eight of these have been put in on business districts in Grand Boulevard, Kenwood, Lakeview and […]