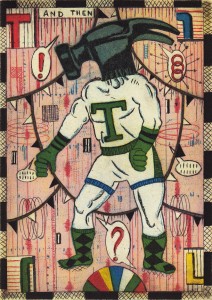 On occasion, in life, one meets the irredeemable shithead.

The asshole’s asshole. The pork-sword who cannot find his better self—or get out of his own way. The art world is fairly littered with them. The slack-jawed dipshit, who is convinced they know a lot more than they do.

I remember the first time I heard this word used to cast aspersion. I was fifteen and I lied about my age to get a job at the local Taco Bell in Lombard, Illinois, which believe me, is its own punishment.

The parking lot was the preening ground for the last generation of actual greasers; a collection of monosyllabic asswipes who’d dropped out of high school. The cops ate free at Taco Bell, which, given the amount of trouble in the parking lot, was actually not a bad idea. They responded quickly and mostly fairly. You’d have the odd cop-on-greaser beating here and there, but I never minded those.

My manager was a twitchy hillbilly named Bill who had knocked up his ill tempered seventeen-year-old girlfriend and was preparing to marry her and go as far as he could in the Taco Bell organization. Bill was an okay guy; a little naive about his job, but basically decent. For about a hundred-and-a-quarter a week they ran Bill like a fucking sled dog. The guy worked sixty to seventy hours a week and, on occasion, would slip into the walk-in and nap standing up. I felt bad for the guy. He was doing the right thing by his girl and preparing to take on the responsibility of a family. As bosses go, he wasn’t a bad guy.

He had a collection of delinquent assholes working for him, including me. We were impossible. We gave away free food to our friends. One guy dealt pot out the back door and very often there were feel-up sessions in the place after hours. Bill was as cool as he could be with us given his job title. You had to screw up pretty badly to get canned. He was easygoing most of the time.

One day a goody-two-shoes dickhead named Bob Holby came into our midst. He was a d-bag who would rat us out to Roger, the other manager who was a former marine. He was a tough Mexican guy who didn’t like us much but let Bill deal with us, the night shift, who he referred to as “The Animals.” Bob followed Roger around kissing his ass and brown-nosing every chance he got. Even Roger thought the guy was an asshole. The worst thing about Bob Holby was that he yukked it up with the cops.

He consorted with the enemy. He’d make them special enchiritos and verbally cup their balls every time they came in. And once Bob Holby got there, they came in all the fucking time, because now they felt welcome. Needless to say, we hated Bob Holby. My friend Z used to blow snot-rockets into Bobbo’s burritos when he wasn’t looking and then we would watch this jag-bag take his dinner break with the cops when they came in, acting like one of them.

The worst job in the place was frying taco shells. One guy would stand there all fucking day frying shells. It was hot and dirty and you’d get splashed by droplets of 550-degree grease when you dropped the basket in the fryer. It sucked. The taco shells got fried six at a time and if you loaded one wrong, they’d be uneven and Roger would make you do it over and over and over. Needless to say it was the suck detail at Taco Bell. We always made sure Bob Holby had to do it, arguing that he was the new guy so tough shit. The FNG (Fucking New Guy) always got the lousy jobs; that was the way this particular scrotum pole worked.

One day, asshole was frying and one of the taco shells got loose. Bob Holby decides to be a hero and save the taco shell. He sticks his hand into the deep fryer to attempt retrieval and winds up with one giant third-degree burn for a right hand. At least we acted fast. He passed out from the pain and we grabbed him and got his hand into a pitcher of ice-water, packing it with ice while he went into shock. Poor asshole. Our manager, Bill, watched the ambulance pull away in disbelief. He said, “The guy put his hand in a deep fryer to save a three-cent taco shell. What a TOOL.” We laughed for a half an hour straight.

This piece is dedicated to that rare hero who could fuck up a one-car funeral.