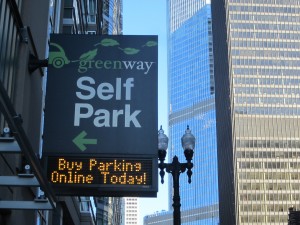 Every time I pedal downtown via the Kinzie Street protected bike lane I’m confronted by an oxymoron. At 60 West Kinzie stands an attractive, boxy structure covered with loosely arrayed rectangles of greenish glass, glittering in the sun. Piet Mondrian-inspired yellow panels accent the roofline and southwest corner, where they form a backdrop for twelve white corkscrew wind turbines arrayed in two columns. It’s the Greenway Self-Park, billed as “Chicago’s first earth friendly parking garage.” Its logo features a VW Bug with leaves blowing out of the tailpipes rather than noxious fumes.

Everyone agrees there are too many cars in downtown Chicago, so what could have possibly been sustainable about building this eleven-story garage, which accommodates 715 more of them? It opened in 2010, occupying valuable River North real estate, only a stone’s throw from several transit stations. There’s certainly nothing green about making it easy for, say, a guy from Naperville to drive solo to work every day in his Lexus, instead of taking Metra commuter rail.

Trying to keep an open mind, I check out the list of sustainable practices on the website, greenwayselfpark.com. It says the garage was constructed from “local and sustainable” building materials. The turbines were intended to generate enough electricity to light the building’s exterior. The building’s open-air layout eliminates the need for a ventilation system, which saves energy. A “daylighting” system causes the garage’s indoor lights to dim when there’s sufficient sunlight. Zipcar and I-GO car-sharing services rent spaces in the building, and there are six charging stations for electric cars, plus another six reserved spaces for hybrid vehicles. And, the website says, the garage has a green roof with rainwater cisterns for irrigation. 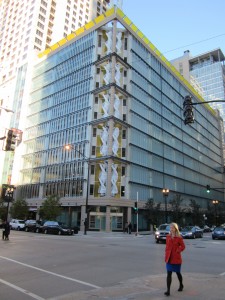 In reality, the green roof and cisterns don’t exist yet. They’re slated for installation as part of a swimming-pool deck when Friedman Properties, the Greenway’s developer, completes a high-rise rental building next door. And it’s unclear whether the turbines, which don’t seem to move much even in a fairly strong wind, actually generate significant power or are there mostly for decoration.

I contact the Active Transportation Alliance advocacy group for their take on the facility. “Whenever you build a parking garage you’re increasing the number of vehicle miles traveled and decreasing our air quality,” says spokesman Ethan Spotts. “So a garage would have to be extremely environmentally friendly to mitigate the harmful effects of all that driving. It’s admirable that they’re trying to be green, but are they really doing enough?”

Michael Burton, a sustainable transportation activist who co-founded Chicago’s Critical Mass ride, is less measured in his critique. “A green parking structure!” he emails. “What’s next, a LEED-certified strip mine? Any infrastructure that encourages private automobile use instead of rapid transit, walking and/or biking is inherently environmentally unfriendly. Using green technology to market a new parking structure is simply cynical greenwashing. A shit sandwich with honey mustard is still a shit sandwich.”

The car-sharing companies are listed on the garage’s website as “partner” organizations, so I ask I-GO spokesman Richard Kosmacher whether this status clashes with the nonprofit’s goal of reducing car ownership and CO2 emissions. “If they want to call us a program partner, meaning that we’re a car-sharing program and we have cars there, that’s fine with us,” he says diplomatically. “The fact that this garage holds two I-GO cars is a small step toward the day when there won’t be a demand for multi-level garages in downtown Chicago, but we’re definitely not there yet.” 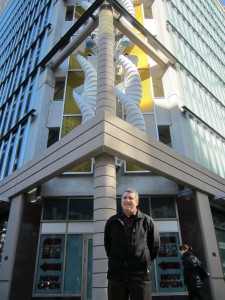 Last Thursday afternoon Dave Lombardi, vice president with garage manager Standard Parking, graciously took me on a tour of the facility. He shows me the charging stations, which use regular, 120-watt, household-style outlets. “This is not a complete solution—it’s not going to fully charge your car unless it’s here for a long time—but it helps,” he says. We step outside and gaze at the motionless wind turbines. “There’s not a lot of wind out there right now but they do turn when it’s windy, and they look kinda cool,” Lombardi says.

Next he shows me that the elevator lobbies feature colorful murals with tips on how to live greener, with a different theme for each floor, like water, electricity, food, air and plants. So that customers don’t forget where they parked, each lobby has a screen playing a pop-music video that fits the theme. Floor 10, “light,” displays Madonna’s “Ray of Light” video and the advice, “use compact fluorescent lightbulbs in your closets.” The fifth floor features the suggestion “carpool to work” and, ironically, Gary Numan’s creepy electronica tune “Cars,” about the isolating effects of driving:

Here in my car
I feel safest of all
I can lock all my doors
It’s the only way to live, in cars

Afterward as Lombardi and I sit in the office, I try to tactfully bring up the argument that marketing the building as “earth friendly” does more harm than good because it suggests that choosing to drive downtown is compatible with an eco-conscious lifestyle. “I think it’s great to have green initiatives in a parking garage,” he patiently responds. “If the reasoning is we should eliminate all garages, well, that isn’t living in reality. It’s easy to stand back and criticize, but Friedman Properties has put forth the dollars to pass along the message of environmentalism. In a perfect world all cars would be electric and there would be no exhaust. But to get to a completely green society there are some stops along the way.” 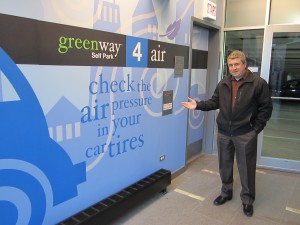 Actually, since all automobiles, electric or not, cause congestion, sprawl, obesity and traffic deaths, in a perfect world there would be almost no privately owned cars, and people would travel mostly by healthy, sustainable modes. Cities like Amsterdam are on their way to achieving this goal, so it’s not a pipe dream. While it’s nice that the Greenway Self-Park incorporates some sustainable elements, the fact remains that the greenest parking garage is the one that doesn’t get built.

Chainlink Halloween Party Meet up with some of the 7,000-plus members of the local bike-social-networking site for drinks at a costume party featuring a bike gear raffle. Friday, October 26, 7pm, Working Bikes Cooperative, 2434 South Western, (773)965-3396, tinyurl.com/clhalloween; free.

Memorial for Neill Townsend and Clint Miceli Gather for a memorial to two young men who died after being doored by cars on their bicycles, and to raise awareness of the dooring issue. Afterward there will be a silent group ride to the Loop. Friday, October 19, Wells and Oak streets, 8-8:30am, tinyurl.com/bikememorial; free.

Active Transportation Alliance member meeting Hear about the advocacy group’s 2012 achievements, get a sneak preview of plans and programs for 2013, and learn how you can be an effective advocate in your community. Tuesday, October 23, 6pm-8pm, USB Tower, 1 North Wacker, second floor, (312)427-3325, activetrans.org; free.

[…] Greenway Self Park garage, with its wind turbines and electric car charging stations, was roundly mocked by bloggers and even the Chicago Tribune after it opened to great fanfare in […]