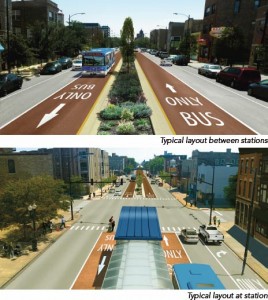 “It comes down to: how do Chicagoans want their streets?” said Chris Ziemann, the city’s bus-rapid-transit project manager, as we drank coffee downstairs from the Chicago Department of Transportation’s (CDOT) downtown headquarters last week. “Do they want them to be congested every day at rush hour with gridlocked vehicles? Or do they want fast, reliable bus service and nice, comfortable conditions for walking?”

As car-dominated transportation systems become increasingly dysfunctional, more U.S. cities are looking to bus rapid transit (BRT) as a solution. BRT delivers subway-like speed and efficiency at relatively low costs through upgrades to existing streets rather than new rail lines. These improvements can include dedicated bus lanes, pre-paid boarding at stations in the road median, bus-priority stoplights and more. BRT is already common in Latin America, Europe and Asia, and it’s currently being piloted in dozens of American cities.

CDOT and the Chicago Transit Authority are partnering on several BRT projects in various states of completion. A proposal to build corridors along Western and/or Ashland avenues may include removing two of the four travel lanes on each street and replacing them with bus lanes, a scheme that would have been unthinkable just a few years ago. “This is politically the best opportunity for bus rapid transit that Chicago’s ever had or might ever have in the future,” Ziemann says. “Mayor Emanuel and [CDOT Commissioner] Gabe Klein really get BRT, and they want it to happen as part of their sustainable transportation policies.”

The Jeffery Jump, a new express bus service, should debut this fall along Jeffery Boulevard on the Southeast Side. Ziemann acknowledges this won’t be true BRT because the dedicated bus lanes will only exist on a two-mile segment of the route between 67th and 83rd streets, and only during rush hours. But the dedicated lanes, plus other firsts like traffic signals that turn green when a bus approaches, will pave the way for bolder projects.

For example, the agencies are planning to build the Central Loop Corridor, operating between Union Station and Navy Pier, as early as 2014. This would be bona fide BRT, including full-time, dedicated bus lanes, bus-level boarding platforms, a new off-street bus terminal next to the train station, and protected bike lanes on Randolph and Washington streets. 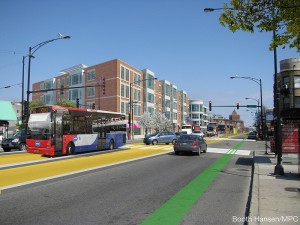 But the Western and Ashland Corridors BRT (transitchicago.com/westernashland), covering a twenty-one-mile swath of the city between Howard and 95th streets, is the most ambitious project yet, with the biggest potential payoff. According to the CTA, one in four Chicagoans live within a half-mile of Ashland and Western, and the avenues have the system’s second- and third-highest bus ridership, respectively. The agency predicts rapid buses on these streets would travel up  to eighty percent faster than current speeds, saving the average rider fifty to sixty-five hours per year.

In general these avenues are seventy-feet-wide, curb-to-curb, with two travel lanes in each direction, plus medians with left-turn bays and parking on both sides of the street. Four potential street-configuration alternatives are proposed for each avenue, with buses running either in the center lanes or curbside, plus different combinations of travel lane, median and parking removal to make room for the bus lanes.

The Active Transportation Alliance advocacy group is pushing for the alternative that includes center-running buses and car-lane removal because it would be the most efficient and ped-friendly option. The streets would also lose their left-turn bays, but the design includes bus stations in the medians, parking on both sides of the street and wider sidewalks. According to CTA studies, this configuration would boost the average bus speed on Western from 10.1 MPH to 18.4, with a fifty-percent increase in reliability and a thirty-percent spike in ridership. Despite the loss of car lanes, the agency predicts average automobile speed would only drop from 17.9 to 16.3 MPH.

In the alternative where buses run curbside, with medians removed and parking stripped from one side of the road to make room for bus lanes, four car lanes plus left-turn bays, automobiles would maintain their current speeds. But bus speed would drop to 15.6 MPH, and there would only be a ten-percent increase in reliability and eighteen-percent increase in ridership, since curbside buses are frequently delayed by right-turning vehicles, parallel parking, double parking and cabs. Active Trans opposes this scenario because parked cars provide a buffer between pedestrians and moving vehicles, the loss of parking would hurt local businesses and peds would be forced to cross six lanes of high-speed traffic.

Last week the CTA held three public meetings on the South, West and North Sides of the city to update citizens on the Western and Ashland project and ask which of the four proposed configurations they favor. The preferred alternative will be announced this winter, and next year the CTA will design the routes and conduct environmental impact studies. 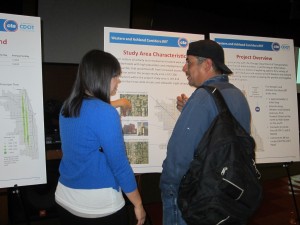 That Tuesday I dropped by an open house at Iglesia Rebaño, a church in Humboldt Park. Fernando Benavides, an O’Hare Airport worker who came here with his daughter, researching a paper for school, argues BRT is a bad idea. “There are more disadvantages than advantages,” he says. “Especially if you’re talking about removing travel lanes or parking. Christ! It’s going to mean more traffic congestion, which means more idling and pollution. I use the CTA and I don’t mind the way it runs now. I just don’t understand why this is needed.”

If Benavides represents the viewpoint of an average Chicagoan, could BRT, let alone car-lane removals, really be politically feasible here? Joe Iacobucci, the CTA’s manager of strategic planning and policy, thinks his agency can successfully make the case that fast buses are in everyone’s best interest. “That’s why we’re doing this outreach process,” he says. “Even if you only drive and never ride the bus, you’re going to see 31,000 more people taking transit on Western. A lot of those folks would be in cars otherwise, so that’s going to make things easier for everybody in the long run.”

Play Streets in Little Village The Southwest Side community hosts one of the many Play Streets events being held throughout the city through November, block parties that provide children and adults with supervised spaces for sports, games and dancing. Thursday, October 25, 5pm-8pm, Gary School, 3000 South Hamlin, (312)427-3325, tinyurl.com/playstreetslv; free.

Chicago Critical Mass Join hundreds of cyclists for this monthly bicycle parade and demonstration for bike-friendly streets, for a leisurely pedal to a destination yet-to-be-determined. This month is the annual Halloween Ride, so wear a costume and decorate your ride. Friday, October 26, Daley Plaza, 50 West Washington, chicagocriticalmass.org, 5:30pm; free.

Play Streets in Woodlawn The South Side community hosts one of the many Play Streets events being held throughout the city through November, block parties that provide children and adults with supervised spaces for sports, games and dancing. Saturday, October 27, 10am-1pm, Parkway Gardens, 6415 South Calumet, (312)427-3325, tinyurl.com/playstreetswl; free.

[…] Steele: You were at some of the public input meetings and have heard some the concerns, and CTA and CDOT really listened to all that feedback and […]

[…] year, the city also held a series of public meetings on what would become the plan for a robust bus rapid transit system on Ashland between 95th and Irving Park, with dedicated lanes for the entire route, center-running buses, […]

[…] year, the city also held a series of public meetings on what would become the plan for a robust bus rapid transit system on Ashland between 95th and Irving Park, with dedicated lanes for the entire route, center-running buses, […]