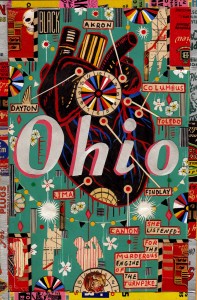 With the election ever nearing, operatives and politicians are beating Ohio like a rented mule. From river to city there are dipshits with clipboards talking a smooth line of  sophistry from both parties.This is the low-tide of democracy, down where the kernels get small, dark and greasy—the margins—where elections are won and lost.

Sadly, that IS the history of this unique slice of ruptured geography.

Ohio remains, as the writer Charlie Finch noted, the state nobody really knows—it has given us our worst presidents—Hayes, Garfield, McKinley, Harding—to name a few. It has also given us some of our finest writers: James Wright  and Sherwood Anderson  included. Yet every  four years  this  fascinating place becomes the  bête noire  of American electoral politics and the faith of its citizens  ever more jerked around by the  process that emboldens its worst elements. And still, we don’t really know a damn thing about the place.

The word Ohio is Iroquois for “Big River”—the Iroquois peoples were part of a powerful conflation of Five Nations tribes and then added another to become the Six Nations. The five—the Mohawk, Oneida, Onondaga, Cayuga and the Seneca, inhabited a wide swath of the Northeast from New York to Ohio and including the St. Lawrence Seaway.

They primarily farmed, trapped fur and protected their nations which extended from the Atlantic Ocean to the middle of Ohio and north through Canada. In my research I’d always thought of the Iroquois peoples as  primarily Canadian—I was wrong, their home base seems to have been mostly New York State and along the Great Lakes. Only the tribes of the Sioux were a bigger nation of indigenous peoples.

The Iroquois  were tough—they fought the French over land, water and beavers—in fact there were whole wars about beavers and their pelts in the 1600s. Over the glacial march of a couple of centuries—any American Iroquois were mostly in Ohio. Ohio was where you went when you lost the Indian wars of the American Northeast. That or flee to Canada, where they treated First Nations peoples a little better—but not much.

The Iroquois kinship extended through a great many matrilineal tribes—meaning the women ran things. They were broken up into “clans” such as Turtle, Bear, Elk and Eel Hawk. They are also known as the “Haudenosaunee” which means  “people of the long house.” Unlike a great many tribes, the Iroquois built their housing like long barracks—and actual houses—rather than tipis. Their architecture was more evolved and soon copied by white settlers—the Quakers owe a debt to the Iroquois “Long Houses.” As tribes go—they succeeded at farming, raising animals, fishing and fur-trapping. In other words the Iroquois were self-sustaining and doing fine when the French decided to “civilize” them by murdering them and trying to steal their land and resources, as well as to convert them to Christianity.

To this end they sent a couple of earnest young missionaries to civilize the savages—Jean de Lalande and Isaac Jogues. The Bear clan didn’t know quite what to think of these two funny-talking, pasty-assed Jesus freaks who wore their shirts down to their shoes—so they shanked them and ate their hearts. A message to the French (and the Huron tribes) that “When we need your advice, we’ll fucking beat it out of you.”

Ohio has a fascinating history. The more I read about it, the less, I realize, that I or the rest of the Republic know about it.

in the 1800s Ohio natives were fond of reminding the rest of the country that what we had in this bloody, merciless, expanse of natural beauty was, in fact, a Republic. That as Americans we owned ourselves and didn’t answer to any kings or queens anymore.

It is a bitter, horrific irony that we would not cede these ideas about liberty to the Africans we kidnapped—or the Five Nations tribes who, rightly, were this great land’s caretakers before we stole it.

Americans who go to the polls in the next few weeks would do well to remember that those they will cast votes for are our employees. And we the people are but custodians of these fifty states. And that our  haggard, beleaguered, beating heart can be found somewhere between Canton and Dayton—where we, the people, clip the coupons and hope.