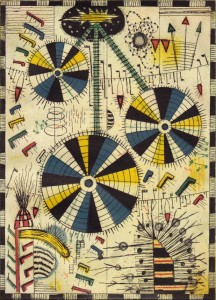 In his imperfect but fascinating “Nothing Like It in the World: The Men Who Built the Transcontinental Railroad, ” Stephen Ambrose, the late popular historian, tells the story of the building of the railroad between Council Bluffs Iowa and San Francisco, the many lives it took, and the blasting, digging, excavating, back-breaking labor of it all. I’ve read a number of Ambrose’s books and he has often been accused of shoddy fact-checking, misquotes and outright plagiarism. Still, the old grouch wrote a damned entertaining story.

Much more entertaining is “Hell on Wheels,” AMC’s nihilistic, grim history of those who built the railroad—freed men of color, Confederate veterans, the newly immigrated Irish and poor Southern whites. Later, past the Mississippi River, it would also be the Chinese and no small amount of convict labor. All the while, the Lakota Sioux, as well as the Cherokee and Cheyenne and many, many other First Nations peoples, were trying to hold onto their lands. The white man took it by force. The railroads were given a remarkable amount of latitude, and discretionary power with the government. They had their own police force as well as the Pinkertons, a bunch of rent-a-cop-type pukes who were mostly criminals themselves. “Hell on Wheels” introduces us to a Confederate veteran and widower named Bohannon who has a positively biblical sense of justice and the band of cutthroats, shysters, swindlers and and con men who built and profited from the expansion of the railroad. They are some nasty, dirty, scurvy motherfuckers. Needless to say, I love this show.

The Indians are portrayed as blood-thirsty, savage and, for my money, should have been more so. It is like an Oglala Sioux friend of mine once said: “We should have killed you fuckers at Plymouth Rock.” The theft of our country was intentional, savage and absolutely without mercy. Upon seeing railroad tracks for the first time, Sitting Bull referred to them as “The Path of Thieves.”

This image is part of the visuals I’m making for Steve Earle’s next recording, “The Low Highway.” As usual, I get to hear the record before anyone else does, and it is an astonishing collection of songs. I can’t really say much more than this. Trust me. Get it and you will be rewarded with a remarkable musical journey to our other side.

Steve is a careful student of American history and a small part Cherokee. One of the books we’ve discussed is Cormac McCarthy’s bloody and unyielding novel of the Plains Indian wars, “Blood Meridian.” It is a sobering and shaming piece of writing that led Steve to once comment to me, “Yeah, I’ve read all of the Cormac McCarthy books… and he means us no good.” I understand this. McCarthy paints a grim picture of mankind altogether. We’re bastards. And when you know as much history as McCarthy (or Steve Earle), it is easy and perhaps inevitable that this conclusion is arrived at. The difference is on Steve’s record there is always a glimmer of hope, a bolt of light, a saving grace.

On some of this record there is an abiding sadness, but it never blots out the sun. In McCarthy’s sometimes pitch-black narratives like “The Road,” “No Country for Old Men” and “Blood Meridian,” though they can be mordantly funny in places, there are two kinds of hope—Bob Hope and No Hope. If you wonder why I prattle on about things like this, I think of those bloody epochs of history as distant mirrors. We are STILL this country. Brutal, violent and unrepentant about taking that to which we feel entitled.

There is a moment at the end of the film version of “No Country for Old Men” where the sheriff, played by Tommy Lee Jones, tells his wife he is giving up; essentially that he is no match for the evil in the world. It is a sunlit slice of utter despair. It is a good man deciding to do nothing in the face of evil. It chilled me to the bone.

However, on Steve’s new record, there is a psychological map of our republic drawn; one that tells us our definition as a country is still being determined; that it is not too late to find our better selves. What my grandmother used to refer to as the “angels of our better nature.” Steve often channels the voices of those marginalized and rendered voiceless—the migrant worker, the addict, the hobo, the working people and outsiders charting their own maps as they go. The people on the other side of the billboards. The imperfect, the hobbled, limping and the luminous. Us. The Americans.