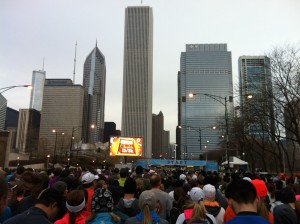 Breakdown: This year, RAM Racing’s Hot Chocolate 15/5K cemented its reputation as one of the most consistently maligned and yet best-selling races in Chicago, selling out 40,000 spots to a combination of 5 and 15K runners in only its fifth year in existence. By early Friday afternoon (the first day of packet pick-up), RAM had issued an apology on their Facebook page for inordinate pick-up times (up to three hours in some cases) and promised improvements the next day and a race that would be “worth the wait.” While there were no major hiccups in the execution of the race today (a notable feat in itself) there also wasn’t much to be impressed with, aside from the sheer magnitude of the event; the course was unimaginative and the promised post-race chocolate was delivered in a disposable plastic mug. There’s something magical and promising about a gigantic race held in the center of a major city that continues to draw runners in, but this year’s Hot Chocolate didn’t leave a good taste in too many mouths.

Price: $48 for 5K, $68 for 15K (with $4.25 registration fee)
Course: A bit uninspired for such a massive undertaking, with the highlight being the almost one-mile jaunt down Michigan Avenue between Jackson and Roosevelt.The 5K and 15K courses split at this point with 5Kers heading to the finish and 15Kers continuing south beside Lake Shore Drive before heading north on the Lakeshore Trail and rejoining the 5K runners at the monstrous finish line. Water and Gatorade were ample along the course itself but not so much in the finishing chute.
Organization (gear check, etc.): Attempting to incorporate an expo into the relocated pre-race packet pick-up in the south lot of Soldier Field, RAM Racing created a hugely frustrating fiasco, with racers who arrived on Friday waiting outside in lines winding through the parking lot for up to three hours. Early Friday afternoon RAM asked runners to come on Saturday if they could and ensured that they would improve the situation drastically. Reported waits on Saturday ranged from twenty to ninety minutes, better than Friday, but still outlandish for a packet pick-up. From the smooth way that RAM handled the 40,000 participants on race day (from gear check to corrals starting to passing out mugs after the race) it seemed like they had the capacity to provide more packet pick-up stations and for whatever reason decided not to do it. This massive failure is going to haunt RAM for a while and really dampened the overall experience of an otherwise well-run race. Starting 5K and 15K runners together also seems like a poor decision that led to unnecessary wait times for those in later corrals.
Goodie Bag (includes shirt): The sleek and sporty grey sweatshirt is the biggest winner here, with male and female versions varying slightly (though sizes seemed to run a bit small). A flimsy plastic mug holding fondue, goodies and hot chocolate was distributed after finishing.
Weather: Low forties—a bit chilly, but with proper running gear it’s ideal weather for an early November run. (Zach Freeman)

Haha, nice review. I totally agree with you on “RAM Racing’s Hot Chocolate 15/5K cemented its reputation as one of the most consistently maligned and yet best-selling races in Chicago.” So glad I didn’t do this race. Waiting in 3 hour bib pick-up lines and over an hour in the start corral is not my idea of a good time. This could be a really great race, if they could just cap it at the amount of people they could actually handle, or figure out proper logistics for a race that size.