by Jan Hieggelke
November 8, 2012Filed under: 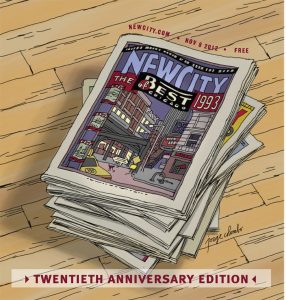 Best of the World
Twenty years ago, we decided to take up an enterprise that flourished in other cities but that was absent in Chicago: the Best of edition.

We committed ourselves maniacally to the editorial integrity of the enterprise, going so far as to code-name the computer folder on the server that housed the files in process. (We called it “pizza” in honor of the sustenance that fueled the many all-nighters we pulled to get the first issue out.) And we committed with equal vigor to making it visually the best it could be. For the first issue, we asked a young artist who’d been making a comic strip for us to create the cover. Maybe you’ve heard of him, Chris Ware?

Jorge Colombo was the art director of that first issue and established many of the visual structures that we still use today. Jorge, a native of Portugal, brought boundless curiosity, an intellectual approach to design and a demanding standard for the best in illustration to us, not to mention introducing us to the sounds of the great Brazilian musicians singing in his native tongue. Jorge has since moved to New York, where his career flourishes as an artist, most notably for his regular covers of The New Yorker. Though he assigned and designed several editions as Newcity art director, this is his first Best of Chicago cover, a fitting bookend to the one he first designed.

Also noteworthy is that Jorge created this cover while on an extended stay in Italy. For among the many changes in the city over two decades, few are more exciting than the increasing globalization of our city and its culture. Careful readers might notice that we made that a sub-theme of this issue, the world in Chicago. We suspect twenty years hence that quality—the global character of our city and our lives—will define us more than any other. 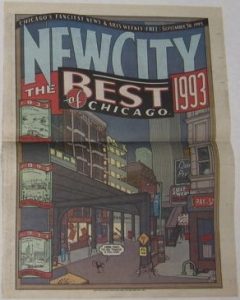 The inside illustrations reflect our theme as well. The artist, Elena Rodina (who also wrote extensively for this issue), grew up in Kazan in the Republic of Tatarstan, Russia, worked for many years as a journalist in Moscow and then came to live in Chicago two years ago.

Turn the page and wander through about 200 different bests, most of which have not been considered for at least five years. Of those, we asked you to vote on forty of them, of which we tallied and asked our critics to weigh in with their own choices. Twenty years times two hundred bests. Time for pizza.