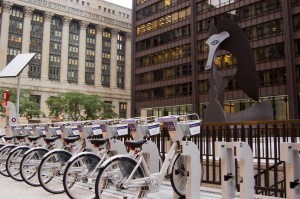 There’s a common misconception that transportation biking is only for privileged white folks. Recently Tribune columnist John Kass expressed this attitude when he dismissed cyclists as “the One Percenters of the Commuter Class,” but in reality people from all walks of life use bikes to get around. Many of these folks are the so-called “invisible riders,” low-income individuals who ride, not because they’re looking to get exercise or save the planet, but because they need cheap, efficient transportation.

Chicago’s upcoming bike-sharing program, slated to launch next spring and grow to 4,000 vehicles by the end of the year, is a great opportunity to broaden the demographics of cycling here to include more residents from underserved neighborhoods and communities of color. By providing cycles for short-term use, to be ridden from one automated rental kiosk to another, it will function as a second public transportation system and remove some of the major obstacles to cycling: the need to purchase, store and maintain a bike, plus fear of theft.

The Chicago Department of Transportation (CDOT) will first install rental kiosks in the Loop and nearby neighborhoods, but coverage will eventually expand to serve an area generally bounded by Devon Street, California Avenue, 63rd Street and Lake Michigan. The roughly 400 kiosks will be located at transit stations, retail and employment centers, schools, hospitals and other convenient places. Citizens can suggest locations at Share.ChicagoBikes.org.

The cycles will be heavy but comfortable three-speeds with upright bars, wide saddles, generator lights, a front carrying rack and flat-proof tires, plus fenders and chain guards to keep your clothes clean. The city is bankrolling the initial setup costs with $22 million in federal transportation grants plus a $5.5 million local match; operating expenses are expected to be covered by user fees, corporate partners, naming rights and/or advertising.

Chicagoans will be able to purchase a daily pass for $7 or a yearly membership for $75 (a CTA monthly pass is $86), entitling them to an unlimited number of free rides of thirty minutes or less. To encourage turnover, a fee will be charged for the next half hour and rates rise steeply after that. You’ll need a credit card to buy a membership, and if you don’t return the bike your card will be charged $1,200.

While bike sharing has great potential, the credit-card requirement and other factors have been obstacles to attracting a diverse membership in other cities. In Denver, where roughly fifty percent of residents are people of color, almost ninety percent of bike-share users are non-Hispanic whites, according to a member survey. “Our demographic profile is nothing to be proud of, and we know that,” acknowledged Parry Burnap, head of Denver’s program, at a recent urban planning conference. “We are mostly male, mostly white, mostly wealthy, mostly well educated.” 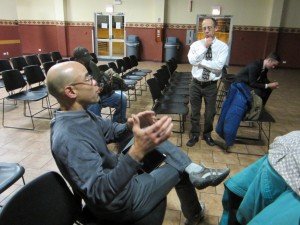 CDOT deputy commissioner Scott Kubly helped launch Capital Bikeshare in Washington, D.C., and he’s managing Chicago’s new system. When I call to ask how he’ll ensure bike-share membership here mirrors our city’s ethnic and economic mix, he acknowledges this was also n issue in D.C. “Growing bike share will be easy in some parts of Chicago,” he says. “So I’m really focused on building membership in parts of town where it will be hardest.”

Kubly has a couple of strategies to make certain the new system benefits all Chicagoans. Before the launch CDOT will run an internship program where inner-city youth from bike-education centers like Humboldt Park’s West Town Bikes and Blackstone Bicycle Works in Woodlawn will learn how to assemble the kiosks and maintain the bikes. “This will help ensure our workforce reflects the diversity of the city and help create a sense of ownership,” Kubly says. The bike-share program will eventually create about 150 full-time, permanent jobs.

“The big challenge is how do we handle liability for folks who are unbanked,” Kubly adds. In D.C. this issue was addressed via the Bank on D.C. initiative, in which low-income residents received a free Capital Bikeshare membership after completing a financial literacy course. Liability for the membership was shared by the individual, the city, a bank and Alta Bicycle Share, the Portland, Oregon-based company that runs the D.C. system and will be operating Chicago’s as well. He’s currently looking into partnering with community organizations and churches here to provide bike share access for people who don’t have credit cards.

Eboni Senai Hawkins, founder of the local chapter of Red Bike and Green, a group that promotes cycling among African Americans, recently met with Kubly to discuss the diversity issue. “He definitely seems concerned and he wants to see an equitable distribution of bike share across the city,” she says. Hawkins notes that, in many black and Latino communities on the South and West Sides, destinations are farther apart than in dense North Side neighborhoods, which makes bike commuting more challenging. She adds that the city needs to do more outreach to educate Chicagoans about how to use bike share, choose comfortable cycling routes and combine bike trips with transit. “That kind of thing doesn’t come easily to everybody.”

CDOT recently held community input meetings around the city to introduce the new system and solicit suggestions for kiosk locations. I attended the final session last week at the Charles Hayes Center, 4859 South Wabash in Bronzeville. As CDOT and Alta staff outlined various aspects of bike share, the handful of locals present stressed the importance of making sure the program is implemented fairly.

“I want to see as many bike assets on the South Side as possible,” says Bernard Loyd, a real estate developer who lives in  the neighborhood and pedaled to the meeting. “Bike share can potentially make cycling much more accessible to people in Bronzeville.” 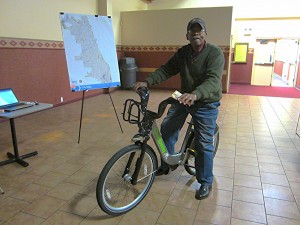 “The challenge is how do we empower the longtime residents of Chicago’s underserved neighborhoods through the bike-sharing program?” adds Harold Lucas, head of the Black Metropolis Convention & Tourism Council and a lifelong cyclist. “How can we use bike sharing as a tool for economic development?”

“My number-one priority is getting a membership that reflects the diversity of the city,” Kubly assures them. “Since we’re using public dollars, it’s important that the folks who are using the service reflect everybody in the community. It’s a challenge but we’re going to crack it.”

Play Streets in Little Village The Southwest Side community hosts one of the many Play Streets events being held throughout the city this fall, block parties that provide children and adults with supervised spaces for sports, games and dancing. Thursday, November 15, 5pm-8pm, Gary School, 3000 South Hamlin, (312)427-3325, tinyurl.com/playstreetschi; free.

Lincoln Square Kidical Mass This kid-friendly bike ride starts by circling Wells Park and then taking off on a fun cruise around the neighborhood on quiet residential streets. Saturday, November 17, 10:30am, Wells Park gazebo, Western and Montrose avenues, chicagokidicalmass.org; free.

Tour of Lincoln Square Learn about the history of this North Side neighborhood, formerly a farming community for celery and pickles and now home to the Old Town School of Folk Music, on this guided bike tour by architecture buff Lee Diamond. Saturday, November 17, River Park, 5100 North Francisco, (773)255-6347, chicagovelo.com, 11am-3pm; $9.

Play Streets in Chicago Lawn The Southwest Side community hosts one of the many Play Streets events being held throughout the city this fall, block parties that provide children and adults with supervised spaces for sports, games and dancing. Sunday, November 18, 1pm-4pm, Eberhart School, 3400 West 65th Place (312)427-3325, tinyurl.com/playstreetschi; free.