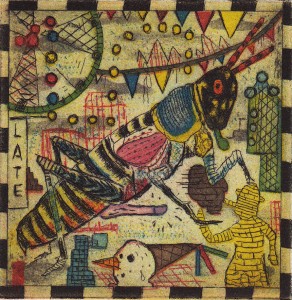 If there is a cooler-looking bug than a grasshopper, I don’t know of it. They’re prehistoric and futuristic at the same time. Some of them even look metallic. Many a science-fiction monster owes its features to the grasshopper. As a kid, I caught them by the jarful; and they were not easy to catch. You’d have to chase the fuckers all over the field. The big ones could jump ten feet and the ones with wings, even further. And they didn’t like being caught—they fought like hell to escape.

When I was a kid, me and a few other dopes would traipse out to the field to capture them. My one friend’s father used to use them as bait for fishing and he’d toss us a buck or two if we brought him back a few jars full. Most of the time I just let mine go. The thought of Scotty’s father sticking a hook through them seemed more than a little cruel.

Paul Lehman, Scotty’s dad, was a thick, strong-looking guy with a tattoo of an eagle on his arm. Like my father, he was a WWII vet and used to cut the grass with his shirt off. He was a hairy motherfucker. My father used to shout across the street to him, “Hey, Apsey-Baby! Put your goddamn shirt on, for Christ’s sake!” Scott’s dad always complied for some reason.

We’d catch grasshoppers all day. They were endlessly fascinating to us. They came in every color and size and whoever had the most in one peanut-butter jar, was considered top dog that day.

There was this other kid who hunted grasshoppers in the same field we did. He was an ill-tempered little bastard named Mark Offer, and he was mean. His mom was a waitress at the King Edward’s Restaurant and his older sister, Nicki, had a reputation for beating the hell out of boys. They were, to say the least, a formidable bunch. What bothered me about Mark was his cruelty.  He would kill grasshoppers with a fork he filched from the kitchen of the restaurant, or he would catch a whole jar of grasshoppers and pour water in the jar through the holes in the top and stick them in the freezer—just to be mean. Most of the time, we avoided him. When we ignored him, he’d go get his sister, Nicki, who would tell us, “You guys play with my brother or I’ll stomp a mud hole in your asses. All of you.”

And she could. One time she pushed Billy Printy’s head down a commode for grabbing her tit. While he was choking on toilet water, she was punching his nut-sack. We did not fuck around with Nicki Offer. At a sock-hop in eighth grade, she told a guy that he would dance with her or she would punch him in the nuts. He danced. Like Gene fucking Kelly he danced. As long as Mark Offer had Nicki around he could be as big of an asshole as he wanted to.

One time, I was out catching grasshoppers and Nicki was in the field with her dog. She walked up to me and I was terrified, but there was something else, too. Nicki Offer was beginning to be really pretty. It seemed like one day she looked like all of the other guys and then…Poof! she started looking like a girl and she was actually kind of beautiful. It was too bad she scared the shit out of me.

She walked up to me in the field and asked me what I was doing. I was kind of afraid to answer her. Finally I said I was catching grasshoppers and crayfish. She asked me if I ever made the grasshoppers and crayfish fight. I told her no… I hadn’t thought of that. She held her hand out and asked me to see the jar of grasshoppers. Wanting to avoid an ass-kicking, I handed them over, monkey-fast. She was looking at them very carefully and she asked me if I knew what they were doing?

I didn’t know what she meant. There were like thirty ‘hoppers in there and some of them were riding the others piggy-back. She told me they were all fucking.

The world slowed to a snail’s pace and I heard myself say, “What?”

She narrowed her eyes and said, “They’re fucking. They’re not riding each other piggy-back, you dope.”

I felt my whole face flush and get hot and said, “I have to go home.”

Nicki grabbed my arm and said, “No, stay here. Let’s watch them fuck.”

Jesus. Now I didn’t know what to do. She was holding my arm and looking at me with a different kind of light in her eye. I started being less scared and she kind of leaned into me and clumsily we kissed. Then, as quickly as it happened, she pulled away and smiled at me.

She ran about twenty feet away and then turned around her face red and flushed. She said, “You better not tell anyone, fucker.”

I just nodded my head and she smiled.