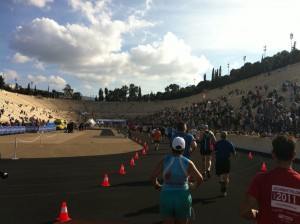 Breakdown: There are plenty of high-profile international marathons, but you’d be hard-pressed (in fact it would be impossible) to find one more historically important than the Athens Classic Marathon, which ran its thirtieth-anniversary race last weekend (more than 2,500 years after the Battle of Marathon) in Greece. Starting in front of the Marathon Flame in an official Marathon Start Venue in the city of Marathonas (you may be more familiar with its Americanized name: Marathon), this race highlights everything about the true origins of the marathon, from following the purported path from the tale of Pheidippides’ victorious (and fatal) run from Marathon to Athens in 490 BC to finishing inside the Panathinaikon Stadium, which also served as the finish line for the initial marathon in the 1896 Olympics. At the starting line, runners are asked to raise their right hand and recite the Runner’s Oath before fireworks are ignited, balloons are released and a starting cannon (a gun’s just not epic enough) announce the start of the race. Nearly the entire course is marked with official historical marathon sign posts at every kilometer and as participants wind through several villages, the streets are lined with citizens young and old enthusiastically cheering “Bravo! Bravo! Bravo!” For newbies and experienced runners alike, the Athens Classic Marathon is an intentionally emotional experience, successfully instilling a sense of history, community, accomplishment and determination into the entire proceedings.

Price: 90 euro (around $115)
Course: Stretching from an official starting location in Marathonas (once you’ve started in a space that was literally made for the race you’re running it’s hard to go back to a marked off city street) to one of the oldest stadiums in the world (and the only one made of solid white marble), the course slowly makes its way back to the heart of Athens, spending time passing through several small villages. The views are spectacular and the spectators are as invigorating as the Powerade and water passed out at each “feed zone.” The original run may have been a bit lonelier and decidedly less paved but an aura of history is imparted with every step.
Organization (gear check, etc.): An incredible number of volunteers turn out for this event, making for an easy packet pickup (in the impressive and circular Zappeion Conference Center). Gear check was served by DHL, who transferred bags from starting line to finish line. Uniformed police lined the course at regular intervals as did official medics at numerous and easily accessible, course-side medic stations. Comfortable shuttles (the kind used for touring, not school buses) carry runners from downtown Athens to the starting line.
Goodie Bag (includes shirt): The bag itself is a unique gear-check bag and the shirt is one of the nicer designs that I’ve seen—a soft blue athletic shirt with white stripes on the sleeves. The more European design makes it look more like a soccer (er, football) jersey than a running shirt, but that might just be the American in me. Also included are a running belt with the Athens Classic Marathon logo and a three-day Metro card for unlimited rides on the Athens train system.
Weather: Absolutely ideal at fifty-five degrees. As the announcer at the starting line remarked: “We don’t have any wind, we have a great sun and we might have clouds later.” (Zach Freeman)