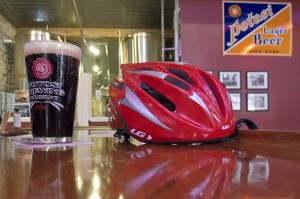 The Badger State is where I go when I want to get away from my daily grind in Chicago and leave my troubles behind. So when my old friend Dave Schlabowske recently invited me to join him on a trans-Wisconsin bike trek, I jumped at the chance.

Dave, a Milwaukeean whose brother Dean plays guitar in Chicago’s Waco Brothers, works for the Bicycle Federation of Wisconsin. He wanted to scout out the Badger Brewing Trail, a bike route from the Mississippi River to the Lake Michigan linking several rails-to-trails bike paths and a number of breweries, part of a network of intrastate paths the bike federation hopes to implement by 2020. I’ve posted the route at tinyurl.com/beersacrosswisconsin.

In October, Dave rode Amtrak to Chicago to photograph our new protected bike lanes in hopes of importing the concept to Wisconsin. Early the next morning we catch a Trailways bus from the CTA Blue Line’s Cumberland stop with our boxed touring bikes to Dubuque, Iowa. After stopping at a greasy spoon to scarf down pork tenderloin sandwiches, the indigenous cuisine, we mount our steeds, cross the Mississippi back into Illinois and pedal north along the river into Wisconsin.

When we reach Potosi, three miles from the river in the southwest corner of the state, and pull up to the town’s historic brick-and-stone brewery, our trans-Wisconsin beer quest officially begins. Founded in 1852, the Potosi Brewery Company went out of business in 1972 but was revived by the nonprofit Potosi Brewery Foundation in 2000. “I love the whole idea of Potosi,” Dave says. “I’m fond of the history of brewing in Wisconsin and over my lifetime it’s been sad to watch breweries close. Rather than going the usual route of converting a former brewery into some new mixed-use development, they started making beer here again. In addition to creating jobs and bringing tourism dollars to the community, it just feels like the right thing to do given our state’s great brewing heritage.” 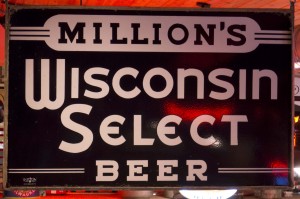 We enter the cozy pub, with stone walls and dark wood accents, sidle up to the bar and refuel with pints of Gandy Dancer Porter and warm pretzels with brewery cheese sauce. Afterward we check out the adjacent National Brewery Museum, with a huge collection of kitschy advertising and beer memorabilia: vintage bottles and cans, ornamental trays, tap handles, foam knives and more. There’s even an old photo of Groucho Marx performing on the PBR-sponsored weekly comedy-variety show Blue Ribbon Town.

Refreshed, we saddle up and shift into low gear to climb the steep road out of the Mississippi River valley. The first twenty-five-mile section of the Badger Brewery Trail involves riding on roads but it’s a very pleasant cruise with the wind at our backs. We roll up and down big hills past old red barns, round hay bales, corn and soy fields, and curious cows and horses. After dinner in tiny Belmont, we take the Pecatonica State Trail and Cheese Country Trail to Darlington, where we crash at a cheap motel. Note that ATVs are allowed on these trails, and they have medium-rough gravel surfaces so they’re best suited for bikes with wide tires.

In the morning we pick up the Badger State Trail, a smoother crushed-limestone path. Around lunchtime we pull into Monroe, known as the “Swiss Cheese Capital of the USA,” centered on an attractive Romanesque courthouse. We take a break in the taproom of the Minhas Craft Brewery, the oldest beer maker in Wisconsin and the second-oldest continuously operating brewery in the country, which creates house beers for Chicago’s Berghoff restaurant and Billy Goat Tavern. The good-natured lady behind the bar draws us pints of hearty Oktoberfest and doesn’t mind at all when we pull out a Wisconsin-centric snack of cheese curds and Landjager dry sausage. 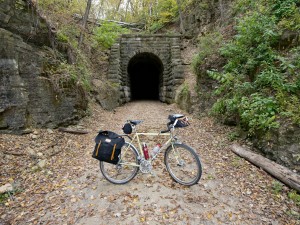 Next we pedal north on the Badger State Trail to New Glarus, another Swiss settlement. It’s famous as the home of the New Glarus Brewing Company, which doesn’t sell its beer outside the state. The brewery is closed when we arrive but there are plenty of inviting old Swiss pubs where one can enjoy the local brew on tap. We settle into Puempel’s Olde Tavern, a snug space with old-timey murals of Glarus, Switzerland, and dozens of rolled-up dollar bills stuck to the ceiling with thumbtacks. We order Fat Squirrel English brown ales and rest our bones for a spell.

As we continue north from New Glarus, the trail turns into a smooth, paved path. It leads us directly to Madison, home of the Great Dane and Ale Asylum brewpubs; Capital Brewery is located in nearby Middleton. On our way into town we stop by a bustling bike poster art exhibit at Machinery Row Bicycles on the shore of Lake Monona, with suds provided by several home brewers. Afterward we tuck into tasty fish fry plates at the nearby Great Dane, a stone’s throw from the state capitol rotunda. We spend the night at the home of Dave’s friend Chuck Strawser, bicycle/pedestrian coordinator for the University of Wisconsin.

In the morning we roll east out of town on County Road Bb, then pick up the Glacial Drumlin Trail, a pleasant crushed limestone path that takes us to the town of Lake Mills and the Tyranena Brewery. By coincidence they’re hosting their annual Oktoberfest Ride and there are hundreds of cyclists in windbreakers and tights hanging around outside in the chilly weather enjoying beer, pulled-pork sandwiches and live blues. 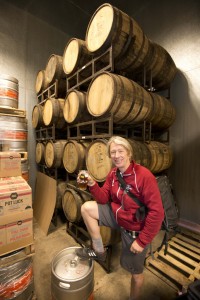 We duck into the taproom to warm up with glasses of Bitter Woman barrel-aged stout and strike up a conversation with bicyclist Helen Dimonte from Middleton. I ask her about the connection between beer and biking. “It’s a way to get the carbs back into my body after a ride,” she says. “And I love the camaraderie between cyclists at the end of a ride when you stop and have a brew afterward and swap stories.”

Afterward Dave and I continue east on the Glacial Drumlin to Waukesha, birthplace of jazz guitar legend Les Paul, then catch the New Berlin Recreational Trail and the Hank Aaron Trail into downtown Milwaukee. Our journey ends at the Milwaukee Brewing Company, which is hosting a packed open house.

When we pull up with our loaded bikes, an employee asks, “What are you delivering?” “We just rode our bikes all the way from the Mississippi River to get a beer,” Dave answers. “Well I’m the brewmaster here and I think you need a double IPA,” the man responds. “I think you’re right!” Dave fires back. The brewer leads us inside with our bikes, pours us pints and gives us a tour of the facility. “This is just one more example of the synergy between bikes and beer,” Schlabowske concludes. “They just go so well together.”

Financing the Future: Improving Municipal Infrastructure in Turbulent Economic Times Steven Koch, Chicago’s deputy mayor, and other experts discuss how city governments around the country are turning to creative and sometimes risky strategies to improve their infrastructure, including transportation networks. Wednesday, November 28, 9am, DePaul Center, One East Jackson, Suite 8005, tinyurl.com/ftfuture; $45.