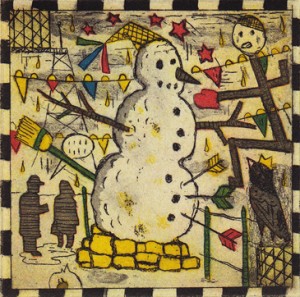 In addition to mimes, insurance guys, clowns, Jehovah’s Witnesses and nuns, snowmen are among the creepiest of entities, especially in Chicago. By the time the sun starts them on their slow, shape-shifting erosion, they’ve been pissed on copiously by dogs, drunks and homeless dudes. Invariably someone tries to piss their name into Frosty while circling, and falls on his ass because, there it is: three-and-a-half feet away… the ass-print.

The snowman has also been splashed by slush from traffic and now has the pallor and appeal of the Unabomber. Once they get skinny from the slow melt, I feel like they become their truest creepy selves. The coal eyes sink deep like Ann Coulter and there are piss-divots covering the body. They are like the witch hags from Macbeth. In real life they never look like that happy asshole on the Christmas card. They look like the old codger that Anna Nicole Smith married.

Even the newly minted round ones look like desperate, sweaty and overweight salesmen; the clammy fuckers who try to sell you timeshares in some Arizona shithole where they eat locusts and gophers.

I don’t know how snowmen ever caught on. From the time I was a kid, all we ever did to snowmen was tip them over, kick their heads off and piss on them. When we got older, we’d switch out the carrot nose with a prodigious rubber dick painted orange and, for days, the neighbors would not notice… and nobody told them.

I remember the day the mother finally noticed. She was backing her station wagon out of the driveway and she was eye level with the dong. All of a sudden, the wagon came to an abrupt halt. She came scampering out of the car yelling, “Jesus Christ! JESUS CHRIST! Oh, God! It’s a cock… a big, dirty cock!”

We were killing ourselves laughing. My friend, Rich, laughed so hard, he puked.

She looked over at us and threatened to call our parents, which was met with a chorus of “fuck you’s,” “blow me’s,” and one “You can keep the dick.”

As a kid, we made snow forts and had snowball wars with each other. There were fourteen or fifteen of us ranging in age from nine to twelve, and we were bastards. We also loved to throw snowballs at cars. There was an old codger named Clarence Owens who would lose his fucking mind and get out of his car and yell and scream about what rotten kids we were and how we all belonged in Boys Town; how Father Flanagan would straighten our asses out. We hadn’t a clue what he was yelling about, but he would hop out of his Rambler and scream his fucking head off. It was a hoot. He would conclude with, “Yer all a bunch of rat-fuckers! Rat fuckers, all of youze!” which made us howl with laughter.

We hid behind this kid David Bear’s house, whose yard abutted the Carbray’s lot and had no fence, offering us the cleanest getaway and obstacle-free egress. We’d wait for the carfuls of greaser dickheads and then pelt their shitty Bondo-job beaters with snowballs.

They’d always chase us… we’d always lose them. Once in a while, if it were only one or two greasers, we wouldn’t run at all. One of my really tough-guy friends, Eddie Josephi, asked me, “Why are we running from these pussies?” and we realized there were ten of us and only two of them. Tidally, the awareness came upon us like a pack of feral dogs and the Custer rules kicked in. Pretty soon we were chasing them. They jumped back in their car and we proceeded to kick huge fucking dents in it.

The earliest illustrations of snowmen are of a crude one in the Hague from a book from 1380. They are probably way older. In Asia, snowmen are usually only two round spheres of snow instead of three.

Bethel, Maine has the record for the largest “snow woman.” She’s close to 130-feet tall, nine-million pounds—proof that there isn’t fuck-all to do in Maine except slop around in snow nine months a year or cook meth.

In Jo Nesbo’s Swede thriller “Snowman,” the mother of a boy named Jonas goes missing and he is continually tormented by a snowman in his yard who is oddly facing the house he lives in. The night his mother goes missing, the snowman is wearing her scarf. Nesbo is the latest in the long line of exquisite Swede thriller writers that started with Stieg Larsson’s “Girl with the Dragon Tattoo” series and the lovely and eerie television series “The Killing,” which is also based on a Swedish television show. The books are set in the gloom and gray of Scandinavian winters which oddly, are not unlike Chicago winters; six months of gray layer-cake skies and slush. They are wonderful books that lead one to believe there is something in the water over there.

My friend, the artist Donald Owen Colley, is the greatest draftsman I know and his brawling, drunken and degenerate snowmen are the funniest goddamned things I have ever seen. They are also scary as hell, in a visceral way. There is a masterpiece of American comic violence of one snowman straddling another and stabbing it with its own carrot-nose. I nearly pissed myself when I saw this piece. Colley is an amazing artist. His hobo-clowns are as genuinely realized as a Jim Thompson novel. He uses tile, paper and various other media with expert acuity and he also makes exquisite etchings. The bitter American vein of comics and the pulps run through his work—anger and humor in a voluble mix—yet it is all his own.

My first winter in Ukrainian Village, one of my grumpy neighbors, Uli, waltzed down the street one night brandishing an aluminum bat. Uli is a big motherfucker without much of a sense of humor about losing sleep because he gets up at four to go to work. The yuppie couple across the street had had a Christmas eggnog soiree where all of the dorks went outside and built a snowman with a wreath and a candle sticking out of his head. They stood around it, like dopes, and sang fucking carols at eleven o’clock at night. After they went in, Uli came down the street, half in the bag with his bat, and demolished the fucking snowman—beat it to a pile of snow and sticks and waxy shit in about three minutes. I laughed so hard I thought I was going to vapor-lock. Fuck, it was funny. They stood in the window, mouths agape and watched. None of them ventured outside. Uli shouted as he walked away, “People’s are trying to sleep! Son-a-ma-beeshes! Shut up with yourself!”

The next day, I sent Uli a bottle of Stoli.

“In addition to mimes, insurance guys, clowns, Jehovah’s Witnesses and nuns, snowmen are among the creepiest of entities…” I know that at some point, for some reason, I will be quoting you on this.