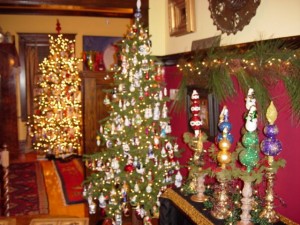 About the time I entered high school in my home city of Minneapolis,  my father began a new Christmas ritual that actualized his love for over-the-top decorating, for things that sparkle and glow when he began collecting glass-blown, hand-decorated, designer Christmas ornaments. What seemed like an innocent holiday hobby quickly spiraled into a year-round obsession and a compendium of nearly 750 ornaments.

I don’t think I’ll ever want to know how much money went into those things. It wasn’t just the ornaments. In warmer months he traveled to Portland, Racine and Chicago for exclusive purchasing events with other collectors (mostly rich housewives or, like my father, gay men, and some het couples). I’d come home from soccer and find taped-up cardboard packages on our back steps. Over the following week, several glitter-coated Santas would sit indulgently splayed over a cloth placemat on the dining room table as my father meditated on which to keep and which to return. More and more, the A-frame walls of the attic were lined with stacks of long, airtight Tupperware bins keeping my father’s treasures safe until November.

Thanksgiving Day would come. While most people stressed over drying out the turkey, my father performed his sacramental hunt for the perfect tree; a Balsam or Spruce. It had to be naturally grown, in other words, entirely unshorn. Because, at the end of another year of child-rearing and lawyering, my father yearned for the sense of solace found only in transforming one of nature’s living things into something fabulous. I knew, once that tree pulled up strapped to the roof of his soft-top convertible, my father would be gone and an interior mastermind with a madman’s vision would take over his body.

He sheared and clipped that tree to form with the artistic foresight of Michelangelo, infusing the house with the tart scent of pine; so much that it was nearly unbearable. Our television was in a small sun room just off the living room. I can remember treading through a layer of sharp pine needles like tiptoeing through a minefield. Anyone who dared come near him and his work was commanded to proceed cautiously.

He’d look at you with wary eyes, flecks of glitter twinkling on his cheek. He meticulously coiled lights around every branch, from trunk to tendril tip. The thousands of electric white buds squeezed your eyes the longer you stared at its brilliance. The final stage took a week, sometimes more. One by one, boxes were opened and tissue paper cocoons undone. Slowly he began placing the ornaments on the tree, each one in its rightful place for that year.

The Polonaise traveling circus figures couldn’t stray too far from one another, while the Breen chameleons had to attain a present balance throughout. More and more ornaments were added, making the branches wilt. He’d harness the weakest with fish line tied to the trunk. It was a feat to behold, the way he transformed our 165-square-foot living room, already jam-packed with antique furniture, into one worthy of any home magazine.

The weekend before Christmas, family and friends were invited over for wine and hors d’oeuvres, but mostly to marvel at the tree and gush over my father. As the number of ornaments grew so did the number of trees. One year, we had three slightly below average-sized trees. Another, he did seven trees total, but they were small and sat on desks and end tables.

My father sold his family home a few years back. He downsized his collection by half and moved into a one-bedroom, too small for a full grown tree. But he still decorates one little one for himself to enjoy. (Jessica Burg)