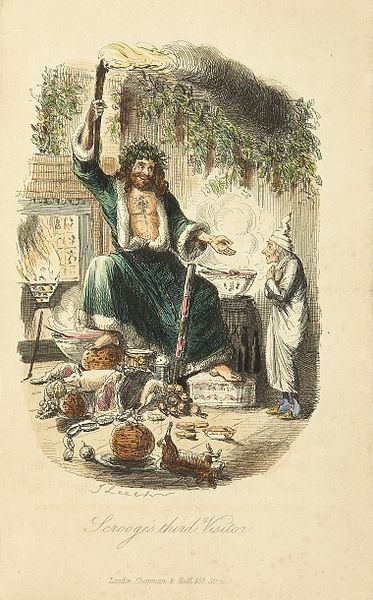 “[Christmas is] the only time I know of, in the long calendar of the year, when men and women seem by one consent to open their shut-up hearts freely, and to think of people below them as if they really were fellow-passengers to the grave, and not another race of creatures bound on other journeys.” —Charles Dickens, “A Christmas Carol”

Jeremy was twelve years old when his father left. There was another woman—a family friend—and an ultimatum, and finally a bitter divorce. The wounds remained raw, and the kids didn’t talk to their father much. But every year, on the evening of December 24, he arrived on Jeremy’s mother’s doorstep in time for Christmas dinner.

“You’ll like him,” Jeremy assured me as his beat-up Corolla rumbled incongruously along the tree-lined streets of Stamford, Connecticut. “He’s very charming. He’s even more charming when he’s drunk.”

I was twenty years old, and this was the eve of my very first Christmas. My parents, practicing Jews, took us kids into the city to see the lights every year, but that was the extent of my yuletide experience. I felt curious, like an anthropologist entering a strange country; nervous, like I feared that the natives would see me as a fraud.

Outside the window, colored lights wound between the bare branches of evenly spaced maple trees, and baubled evergreens winked through the windows of sprawling, well-maintained houses. On the sidewalk, a woman slouched into her heavy coat, clutching a plastic bag as her small dog squatted. Tiny flecks of snow drifted in the air, melting to nothing as they touched the ground.

But the commercialism banks on something genuine. Christmas carries a myth, a mystique, about the transformative power of goodness and joy. This may be best articulated in the movies. In “A Christmas Carol,” a trio of phantoms teaches curmudgeonly Ebenezer Scrooge to open his heart and share his wealth. In “It’s A Wonderful Life,” Jimmy Stewart, on the brink of suicide, learns how valuable he is to the people around him. “How the Grinch Stole Christmas” tells of a would-be holiday saboteur whose hard heart melts before the generosity and kindness of his neighbors. Amid familiar Christmas rituals and traditional holiday cheer, these characters experience insights that transform the way they live their lives.

This transformation is not limited to the movies. Around the holidays, peoples’ priorities seem to shift: we cultivate joy and gratitude; we celebrate love, generosity and community. According to Business Wire, charitable website Causes.com reports that donations skyrocket by forty-two percent during the holiday season. We travel hundreds of miles to share the season with friends and family, and strive to appreciate their contributions to our lives. We exchange gifts. Under twinkling Christmas lights, we smile at one another on the street. We are prone to random acts of kindness. In the spirit of the season, we embody the best versions of ourselves.

In her most serious tone—the one reserved for cautions against traffic and stranger-danger—my mother reminded us not to tell the other children that Santa Claus did not exist. On the playground, pigtailed and smugly superior, I pitied the Christian children, whose parents lied to their faces about the fat man in the red suit. Those poor kids. Their eyes shone as they chattered absurdly about reindeer and elves, or worried about how St. Nick would fit down their chimneys. It all seemed very strange and arbitrary to me. And there was a Santa in every mall atrium—how could they not know?

“Why do the parents lie?” I asked my mom. She never gave me an adequate answer.

One friend figured out that Santa Claus was a fraud, she was seven—old enough to recognize her mother’s handwriting on “Santa’s” gifts. But she played along for the next three years because her mother took such joy in the charade. And because she herself loved getting caught up in the fantasy, completing the comfortable rituals of setting out cookies and milk, and listening for Santa’s sleigh. “When you’re a kid, you really believe in magic. You never, ever get that again when you’re grown up,” she tells me.

Except that, in a way, we do. Like parents talking up Santa Claus to their bright-eyed, wonder-filled progeny, we allow our cynicism to give way to nostalgia. For many, that nostalgia begets genuine feelings of generosity and joy. We strive to live up to the values of the season. As adults, we understand that this ideal world, like Santa himself, is a fantasy. But in this bounded time and space, it becomes our reality.

Jeremy’s father is indeed charming, and grows more gregarious as the night goes on and the drinks go down. In the living room, we sip eggnog—sweet and spicy, with a kick of rum—as we place the last ornaments on the tree. Beneath it, brightly wrapped packages promise unimaginable delights.

“Remember this one?” Jeremy’s sister squints at a little pink bauble painted with clumsy hearts. “I made this in third grade. Mrs. Johnson’s class. Remember Mrs. Johnson?” We weigh down spiny branches with chipped family heirlooms, colorful baubles, sparkling snowflakes and delicate ceramic figurines. Jeremy picks a piece of tinsel out of my hair. The room is bright, warm and filled with laughter. Outside the snow falls in earnest.

For a few weeks, or even a few days, Christmas creates a space in which we can set aside our differences, suspend our cynicism, and make room for magic. In the spirit of Christmas, we embody the values and pursue the relationships that, for whatever reason, are not practical for everyday life. On some level, we know that it is a fantasy, but we are willing to suspend disbelief because the fantasy has value: it reveals our human potential. Later, as winter sets in, as trampling boots blacken the soft snow, that fantasy may keep us warm.

Christmas is not a time nor a season, but a state of mind. To cherish peace and goodwill, to be plenteous in mercy, is to have the real spirit of Christmas. —Calvin Coolidge