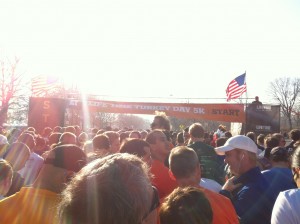 Breakdown: Along with gathering together with friends and family to eat as much food as possible, a quick morning race has also become a traditionally popular family activity to take on during Thanksgiving, with more than ten races in the Chicago area taking place today and several more scheduled for this weekend. Now in its thirty-fifth year, the Lifetime Chicago Turkey Day 5K (or TD5K for acronym lovers) is one of those races, and probably the most convenient for those celebrating T-Day in Chicago proper, especially since it starts at the sleep-in friendly time of 9am. Starting on Cannon Drive in front of the Peggy Notebaert Nature Museum, the race spends a good deal of time on a blocked-off lane of Lake Shore Drive before following the Lakefront Trail to finish back on Cannon Drive. Changed from an 8K to a 5K, this year’s race drew around 6,000 people, which led to a somewhat last-minute waved start, with new waves being released every thirty to sixty seconds. The event also includes the Plymouth Rock Ramble starting at 10am, offering shorter distances for kids aged two to twelve. Though it’s a timed race, this is a fun family-friendly event, so speedsters should plan to get to the front of the packed starting area or spend a lot of the race trying to get around slower runners.
Price: $25
Course: Starting just north of Fullerton on a fully blocked-off Cannon Drive, the race headed south before following Fullerton to Lake Shore Drive, where the right lane of northbound traffic was blocked off for the race. The course turned south near Belmont Harbor and followed the Lakefront Trail south to the finish line. There was one well-stocked water stop just after the turnaround.
Organization (gear check, etc.): With almost a full week of packet pick-up available at Fleet Feet Old Town, along with race-day registration and pickup, logistics were well-handled. Gear check was heavily staffed and quick. The starting line could have used some pace markers.
Goodie Bag (includes shirt): In support of the Greater Chicago Food Depository, the race bib and shirt (a sporty orange long-sleeve number) were handed out in a paper bag along with a request to fill the bag with donations and bring them in on race day. The rest of the offers were made available through a virtual goodie bag. Well done.
Weather: Low fifties and sunny. One of the better Thanksgiving Day weather reports a runner could hear. (Zach Freeman)