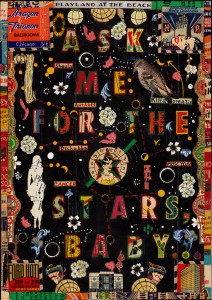 A decade ago I took an Artist in Residency in Missoula, Montana at the University of Montana. I was always leery of visiting-artist gigs.  I’ve always found them a little annoying. The students are cool though. I’ve learned a lot from them and have hired some of them. One of the great things about young artists is they are willing to try anything. Their ideas about art haven’t hardened into inflexibility. Mid-career artists are a little overly fond of what they know and way too dismissive of those emerging talents that push the practice forward. This is particularly true here, in Chicago.

In most cases, I am twice the age of the other artists who work for me. I am grateful for what I’ve learned from them. They came of age a great deal more at home with technology and were able to make me realize its importance and how to use it as a tool. The more of their music, books and art I became exposed to, the wider my array of choices as an artist became.

The kids were great. What I disliked about the visiting-artist gigs were the  faculty. Yup, the teachers and the not-so-veiled resentment that sometimes hangs in the air like a spiderweb.

I charge a lot to leave my studio. It costs me a lot to NOT be at work. I don’t like the airport or flying. Colleges out in the country make me nervous. All of this factors into what I charge for a visiting-artist gig.

I’ve never much liked these things. This one was different because it was in the Bitterroot Valley in Missoula and was purely lovely. The guy at the University of Montana was a great guy and artist named Jim Bailey who was and is a first-rate artist and teacher—a rare combo—and he really cared about his students. To him, they were job one. He is one of those rare, unselfish guys who has spent his life giving of himself to the difficult and problematic personalities who’ve decided to become artists. Were I ever a teacher, Jim is the one I’d want to be.

Here and there these guys exist. Tom Druecker in Austin. Billy Shire in Los Angeles. Joe Amrhein and Susan Swenson in Brooklyn. Art professionals who’ve sacrificed to help others succeed. If only the rest of the art world were this generous of spirit, especially here in Chicago, where a great many mid-career artists are standoffish and clannish… paranoid and embittered. It’s a small town, art-wise, where the art world is run by merchants.

For the most part though, what crumbs are thrown to mid-career artists here (and make no mistake, they are crumbs) are fought over in the ugliest manner possible. The thought of holding out a hand to an up-and-coming artist? Pure anathema. Everyone protects their small, worthless bit of turf. There are, of course, exceptions, but they are rare enough to be considered statistical aberrations. This is a mean town. The casual brutality of its visual-art world is far more petty and vindictive than I’ve ever seen in any other city I’ve ever shown in, and it always has been.

When I visited the University out there in Missoula, part of me damn near didn’t want to come back. The Bitterroot Valley is unspeakably beautiful—words don’t quite cover it. The people were nice, helpful and had genuinely nice things to say to each other. The town diner was in a union hall and I had the best meatloaf I’ve ever eaten there.

I had a couple of marvelous conversations with the late great novelist James Crumley and I got what people who love the West love about it. A lot of it still hasn’t been domesticated. It is a landscape with a sense of intention and malice. Tragedy and history. Tit-for-tat blood feuds. Crazy Horse may have died here, but so did Custer, goddamnit, and he went FIRST. Montana is like that.

One of the last nights I was there, the receptionist at my hotel asked me if I wanted a wake-up call for the meteor shower at 4:10am. I asked if people actually woke up for these. She told me with a smile that half of the guests in the hotel had flown in just to see this one. So I said, “Sure. Wake me at four, so I can make some coffee.”

Jesus, it was something. I thought I might catch a comet or two. It was crazy, like a celestial pinball machine. Stars and comets racing across the sky in every direction and speed. In Montana, without all of the buildings and ambient light, dark is pitch black. It was astonishing and left me speechless. The next day, I  asked the astronomer staying at the hotel if the same shower was happening over Chicago. He looked at me for a moment in an amused way , as if talking to the neighborhood derelict, and gently said, “Unless you have a different sky, then yes. This meteor shower definitely occurred over Chicago as well.”

That is the way it is with this place. Beauty rages all around us. It is just sometimes harder to see.