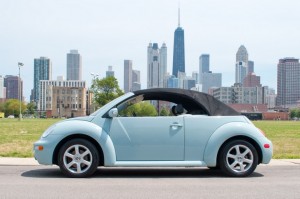 Last year Zipcar, the world’s largest car-sharing company, really got my goat with its “Sometimes you just need a car” ad campaign, featuring images of people looking miserable while pedaling to a meeting or riding the bus to a music gig. Fact is, my friends and I do these things all the time, and cyclists and transit users make up a big chunk of the company’s customer base. Why insult your clientele?

But Zipcar did have a point. Even sustainable-transportation blackbelts can use an automobile now and then for road trips, hauling cargo or giving rides to friends and family. Zipcar and I-GO, operated by the local nonprofit Center for Neighborhood Technology, provide a great service to car-free Chicagoans by allowing us to include driving in our toolbox of travel options.

The new breed of peer-to-peer car-sharing companies takes a different approach by helping individuals rent directly from private car owners. This model may actually be a bit more eco-friendly, since it eliminates the need for the company to purchase a fleet of new vehicles and lease off-street parking spaces for them.

In a nutshell, tell me how Getaround works.

Getaround is a marketplace for sharing cars. We connect car owners with people who need access to a car. Getaround provides the technology and the insurance to make it easy and fun to share.

How did you get the idea for it?

I came up with the idea about two-and-a-half years ago at a school called Singularity University. Google founder Larry Page challenged us to come up with an idea that would positively impact a billion people in ten years. We decided to focus on a problem that we call “car overpopulation,” the fact that there are a billion cars on the planet that sit idle twenty-four hours a day.

Do you think Getaround might replace traditional car sharing?

We see Getaround and traditional car sharing as being complementary. Our goal is to see hundreds of thousands or millions of cars shared around the world. Our model works in a lot of areas where traditional car sharing doesn’t work, and where traditional does work we’re another option. What’s nice about Getaround is that it’s free to join and there’s no annual fee. You can find a really broad variety of vehicles, anything from a Tesla Roadster to a Prius, or the newest E.V. [electric vehicle].

Why would someone want to trust a stranger to drive their car? Wouldn’t there be worries about your car being abused, or what happens if they crash? Maybe there are also some issues from the renter’s perspective. How do you guys address those issues?

The second part is it’s really community-based so owners rate the renters and the renters rate the owners. If someone has a car that shouldn’t be on the site, that will come up through the ratings. And we tell both sides of the marketplace that if for whatever reason you don’t feel comfortable renting to someone or you don’t feel comfortable renting that car, absolutely do not; we’ll find an alternative. We’ve been pleasantly surprised that most of the cars on the site are nicer, newer vehicles.

Also we do pretty rigorous ID verification and driver screening so anyone actually renting through the site has a very good driving record. What it comes down to is, people have these cars that cost them a lot of money, and the fact that they could earn $350 to $1,000 a month is actually really helpful.

In general people love it. They say that they get to meet their neighbors or help out people in their community. And I think the fact that we provide twenty-four-hour roadside assistance really helps people as well.

How many Chicago car owners are sharing their cars at this point?

We have 350 on the site so far. The response with Chicago has been great. It’s really all over the city, including areas that have never had car sharing before, and there’s a huge variety of cars.

We’re also beta testing a new service called Getaway in Chicago and San Francisco. If you have a car you won’t be using at all, say you’re in the military or working abroad or studying abroad, you can give it to Getaround for six months or more and we’ll manage it. We guarantee $1,000 for the first three months.

How does the compensation structure work for regular rentals?

Anything else you want to tell me about the company?

The other key element with Getaround is we develop all of our own technology in-house. We have the Carkit, which is our in-vehicle technology that has security features and access controls. It lets the renter unlock the car with just their smart phone.

What’s the coolest thing about launching Getaround in Chicago?

The response from everyone has been great: the mayor’s office, the transportation commissioner [Commissioner Gabe Klein formerly worked for Zipcar], aldermen and community groups. It seems like this is something that’s really needed in Chicago, and people from all walks of life are excited about it.

Bike Lake View monthly ride Join the Lake View Citizens Council for a leisurely morning bike ride around the community. Get to know your neighbors while exploring the bicycle-friendly neighborhood. Sunday, December 9, 10am, Seminary and Waveland, bikelakeview.org; free.