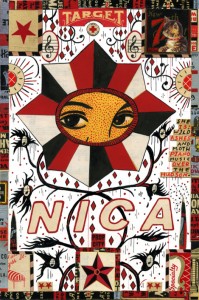 She was born a Rothschild, an heiress of one of Europe’s great fortunes. The Baroness Pannonica de Koenigswarter, or “Nica” to her friends in the world of jazz, was a darkly beautiful, worldly muse to some of bebop’s titans—Charlie Parker, Thelonious Monk and John Coltrane, to name a few. Charlie Parker, in fact, died in her apartment in New York’s Stanhope Hotel in 1955. The scandalous and racist media of the day covered the jazz great’s passing with all the salacious glee that the forbidden taboo fantasy of a famous-black-man-and-infamous-white-woman narrative allowed. This story was catnip for the local media, underlining the repulsion/attraction dynamic between the races that was at the heart of the fear and hatred so rampant in our country in the fifties. It was this very narrative that got the young Emmett Till murdered in the South.

Nica was a fearless supporter of jazz, often driving Monk and Parker to their respective gigs. She did not give a fuck what anyone thought of her. Her support was total. Thelonious Monk, in the final years of his life, lived in her home, with her and something like 300 cats. She was a sucker for stray cats and a supporter of powerless musicians against a racist system that kept them poor and uncelebrated, in many cases until after their deaths. Monk, diagnosed as a schizophrenic, was not an easy man to care for and would wander off, not fully aware of where he lived or, sadly, at the end, who he was. Her kindness was almost saintly.

There is a lovely documentary about her, produced by HBO films, called “The Jazz Baroness,” that was made by her niece.

Her niece recalls meeting the Baroness at a club in New York and informing her aunt that, “There are tramps drinking in your Bentley.” Nica’s retort was, “Good, Darling. Hopefully, they will be too drunk to steal it.”

My pal and partner in FireCat Projects, Stan Klein, is the guy who gave me the Baroness’ book, “Three Wishes,” a marvelous collection of little-seen photographs of some of jazz’s greatest that are sometimes startling in their intimacy. The theme of the book is Nica asking each jazz great what their three wishes would be. Some of the answers are predictable–more money, more pussy, more respect. Some are hysterically funny. Louis Armstrong wishing to avoid constipation (I know this was a big preoccupation with Satchmo from Gary Giddins’ splendid biography), Dick Katz wishing drummers should not be allowed to play as loud as horn players. Some responses are heartbreaking, like Art Farmer’s: “There is only one wish… to like myself.” Some are utopian. Stan Getz wishes: “Justice. Truth. Beauty.”

It is one of those books I’ll always treasure; an odd collection of misshapen pearls that somehow hang together and make something irreplacable and beautiful.

I’m grateful to Stan for reintroducing me to jazz. I don’t know enough about it, other than its genesis is one of those things we continue to owe to the great city of New Orleans; more specifically, to the forty square blocks of whorehouses known as Storyville. Stan is a patient guy. He endures the ear-splitting decibels of ZZ Top, Pixies, Hendrix and AC/DC that I sometimes need to get through the day. He smiles his former-schoolteacher’s smile and endures.

He is also a sneaky motherfucker, who brings the best R&B, soul and jazz in and gets me hooked on it. I can’t go a week without hearing Fontella Bass sing her “Rescue Me” or Billie Holiday and Lester Young’s love duet, “Lover Man.” For me, these songs are all part of a larger narrative of American music that makes kin of all of us.