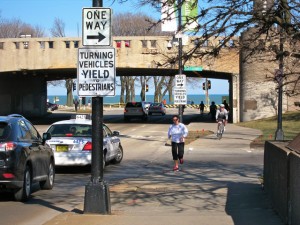 The old sidewalk on the south side of Fullerton, now replaced by a car lane/Photo: Michelle Stenzel

Last week I attended events related to two different Chicago Department of Transportation (CDOT) bridge projects. One of these spans will be a terrific addition to the city’s sustainable transportation infrastructure. The other one, not so much.

First the good news. CDOT’s Addison Underbridge Connector project will link up existing snippets of bike path along the Chicago River to create a nearly two-mile, car-free route from Belmont Street to Montrose Avenue. This new path segment will be suspended some sixteen feet above the river on piers.

Starting from the north end of an existing trail in Clark Park, just west of Lane Tech High School, the elevated path will continue north under the Addison Street Bridge, hug the east riverbank and then cross to the west bank to meet up with an existing trail in California Park. Eventually the path will continue under the Irving Park Road Bridge to Horner Park, where trails lead north to Montrose.

Janet Attarian, head of CDOT’s Streetscape and Sustainable Design section, outlined the plan to an enthusiastic crowd last week at Revere Park, 2509 West Irving Park. Construction could begin on the roughly $9.5 million project as early as 2014 if federal funding becomes available, she says. The Irving Park underbridge will be built as part of a separate CDOT project to reconstruct that roadway, which could also begin in 2014. 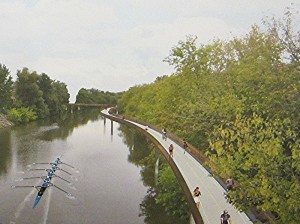 Attendees were excited about the plan. “This will help my sixteen-year-old sister have a seamless ride from Montrose to school at Lane Tech,” says cyclist Jacob Peters. “Right now she has to go on side streets or on California Avenue. This is a fantastic project.”

I wish I could say the same about the new bridge CDOT opened last Friday on Fullerton Parkway over the Lincoln Park Lagoon at Lake Shore Drive. Rather than creating a new travel option for pedestrians and cyclists, this project took away an existing one. Here CDOT took an existing four-lane street with two sidewalks and removed the sidewalk south of Fullerton to make room for a dedicated right-turn lane for cars entering southbound LSD.

This kind of thing was commonplace under the Daley administration, when the city eliminated several crosswalks on Michigan Avenue and at Buckingham Fountain to facilitate driving. The Fullerton rehab was designed before CDOT’s progressive new commissioner Gabe Klein took over last year, so let’s assume this backward-thinking design is a relic from the old regime.

The new configuration essentially makes it impossible to safely walk or bike to the lakefront on the south side of Fullerton. The justification for doing this is that it removes a conflict point between the right-turning cars and eastbound bikes and pedestrians, but it does this by simply eliminating the non-motorized traffic. 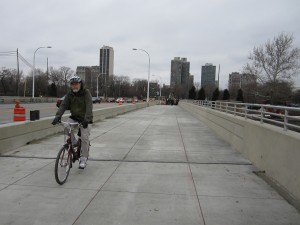 The sole remaining sidewalk, on the north side of Fullerton/Photo: John Greenfield

Now that they can no longer continue east of Cannon Drive on the south side of Fullerton, pedestrians and cyclists are expected to cross to the north side of Fullerton west of Cannon. The other option is to take an extremely indirect route via ramps under the new bridge, then back up to the north sidewalk via a staircase or another set of ramps. In reality, few people are going to use this convoluted route.

The new sidewalk on the north side of the Fullerton bridge is twenty feet wide, which sounds like an improvement over the old thirteen-and-a-half-foot sidewalk. But the combined width of the two old sidewalks was twenty-seven feet. Since both eastbound and westbound non-motorized traffic is now funneled onto the same sidewalk, come springtime it’s actually going to be more crowded than before.

At the ribbon cutting Friday several speakers described the $12 million project, bankrolled by Federal Highway Administration and Illinois Department of Transportation (IDOT) funds, as a win for pedestrians and cyclists. “This is more than just a bridge that will get thousands of commuters more easily to downtown every day,” says 43rd Ward Alderman Michele Smith. “It’s also a pedestrian experience, a bicycling experience, all in a more safe environment because of the way that traffic will now be moved all to this one side of the bridge.” 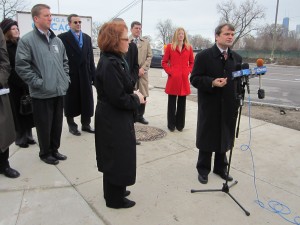 During the Q & A session I asked CDOT chief engineer Dan Burke how he thought the redesign would benefit pedestrians and cyclists, despite taking away access. “We think it will be a lot safer for all users,” he says. “We’ve separated vehicles from pedestrians and bicyclists. As you can see it’s the confluence of a very busy area.”

Afterward, Burke explained to me that he felt there was a traffic crisis before the reconfiguration was done. “You would have excessive traffic backups through the morning rush hour from the onramp all the way onto Cannon Drive. We think this separation’s the best in terms of safety and accommodating all users.”

But crash statistics suggest there actually was no major ped/bike safety problem here before the rehab. My GridChicago.com blogging partner Steven Vance looked up the IDOT crash stats for the location and found there were only three bike or ped collisions with cars at this location between 2006-2010. On the other hand, there were ten, thirteen and fourteen crashes at the Drive’s intersections with Foster, Montrose and Wilson avenues, respectively, during this same period.

“We’re forcing people on foot and on bikes to go an extra distance, to take extra time… and to take a non-direct path involving changes of elevation, just to get to the Lakefront Trail,” argued Bike Walk Lincoln Park blogger Michelle Stenzel in a post earlier this fall. “We’re making it harder for them and we’re discouraging their choices of transportation, in order to make the intersection more convenient for people who choose to drive, and thereby rewarding their choice.” 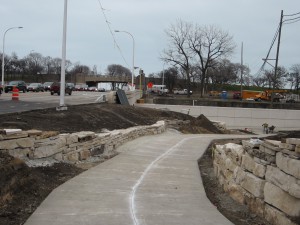 The south sidewalk is now gone; a ramp leads under the bridge/Photo: John Greenfield

On the bright side, CDOT will be rebuilding all of North Lake Shore Drive in the future. If the Fullerton redesign is ultimately judged a failure, which I’m confident it will be, there will be an opportunity to fix the problem, perhaps by converting the new right-turn lane into a bike lane that will provide cyclists with a safe, direct route to the lake.

And hopefully the Fullerton rehab will be the last example of CDOT constructing a major infrastructure project with auto-centric priorities. It’s unlikely Fullerton would look like this if it had been designed under Klein.

Lincoln Square Kidical Mass This kid-friendly bike ride starts by circling Wells Park and then taking off on a fun cruise around the neighborhood on quiet residential streets. Saturday, December 15, 10:30am, Wells Park gazebo, Western and Montrose avenues, chicagokidicalmass.org; free.

[…] on the Addison Underbridge Trail Project Slated to Begin Next Spring […]

[…] Should We Call the Addison Underbridge Connector — The Lane Tech Trail? […]