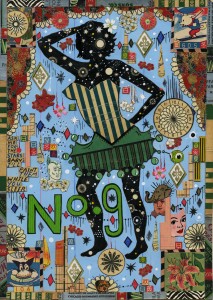 Miami, Tuesday, 6am. He stares out from beneath the Days Inn sign, steeped in his own deep thoughts, slowly drawing in his Camel. Suddenly he looks over at me and says, “They let me walk around all night with a VIP pass stuck to my ass and nobody told me. The fuckers just let me look douchey in South Beach, man.”

I don’t know what to say to him, so I say nothing and keep smoking. This guy is a real estate man from Delaware. I tell him the VIP pass certainly didn’t make him look douchey. That it, for sure, isn’t the pass. He is relieved.

11:30pm, 15th and Collins, South Beach. A young Hispanic man is having a cordial if heated conversation with an escort, a zaftig Dominican girl. She is big everywhere, fleshy and sexy in a way girls in the seventies were. She’s wearing skin-tight, silvery sweats and sporting a camel-toe you could lose your keys in. They are haggling price.

I’m at Jerry’s Deli—kind of ground zero for all of the fairs at 15th and Collins.

The young man keeps mentioning “me and mi amigo” and the young woman keeps pensively shaking her head and saying something about her  “brand.” It finally dawns on me that the guy wants a “twosie'” for him and his pal. An English guy next to me at the sidewalk cafe leans over and inquires, “Are these guys trying to share a vagina?”

I nod my head because that, indeed, seems to be the case. The English guy asks me, “What is she talking about, her ‘brand,’ what does she mean? Is she talking about her hoo-ha? Her hoo-ha is a ‘brand’?” I tell him this week it is.

The conversation goes on for a long time. In fact, as I pay my check and leave  it is still going on.

It’s that time of year again. When the weather gets cold, the art-world clown car beats a path for Miami Beach and pitches its various tents anywhere it can find 20,000 or so square feet or a tony hotel, and the money-changers go to work.

I swore off these things about seven years ago. My reasons were that they taught artists to want all of the wrong things and taught collectors to value what things cost, rather than what things were. I am still convinced that I’m not wrong in believing this.

The thing that is now apparent to me about art fairs—after years away from them—is that these things are not going to go away. They are the new market, so get used to them and figure out how to carve out some kind of peace with them or be shut out of the art world’s most salient economic engine. Galleries have empowered this model to the point where they no longer have the luxury of NOT doing them—attendance at gallery openings is nothing compared to attendance at fairs. When artists have something new to break out or try? They do it as an installation at a fair. These things, for better and worse, are more the art world than galleries or institutions are.

I also came to realize that there are now a whole culture of art collectors who ONLY buy work from art fairs and like doing it this way. They plan their vacation around fairs like Art Basel Miami Beach and make an event of it. I spoke to people who routinely attend these fairs and do not at all go to institutions or galleries and don’t want to.

The thing I had forgotten about Miami is just how much fun it is to watch the whole art-world-rolling-goat-fuck spill down Collins Avenue night after night. Or to watch the celebrity perp-walk at Art Basel Miami Beach from the sidewalk outside; art dealers scurrying from rap-star to reality-TV host like wind-up toys, air-kissing and hand-pumping like Vegas casino greeters. This is prom night for the wealthy swinging-dick set. It is a night for them and their money to romance each other in the full, adoring, reflected glare of art—a pantomime of something meaningful.

It’s Saturday night over in the Wynwood section of town—Overtown. One of the galleries that represents me, Brooklyn’s Pierogi, is part of the Seven fair, kind of the anti-Basel art fair. It is seven galleries from New York and London who, instead of having booths with art crammed in them like a Tijuana whorehouse, hung considered exhibitions of their artists with enough wall and floorspace to take everything in in a meaningful way. I’ve brought three of the kids who work for me, in an effort to show them how to navigate this part of the art world. One of the young artists who works for me, Tyler Krasowski, has hooked up with a group of artists from Estonia he knows from a trip there earlier this year. When I call him to see if he wants to go get a steak he tells me breathlessly on the phone, “I’m with the Estonians and I’m wearing a diaper. I have a naked French girl on my back right now.” I advise him to keep doing what he is doing.

There is a parking lot with fifty food trucks, including one that specializes in various grilled-cheese creations. Around us is block after block of mural projects. We are in the Wynwood Walls section of Miami—a part of town given over to street art, and they seem better for it. It has attracted art-friendly businesses that like this vibe.

One must applaud Miami, in its forward thinking about the arts and cultural tourism; and what it can do for the city’s profile. The city itself has gone all out to embrace these art fairs, knowing what an immense boon they are to the city’s economy as a whole. They’ve found a way to involve the whole city in this enterprise in a way that informs the citizenry that art is a necessary and profitable part of Miami’s culture.

When I swore off these things, Art Basel Miami Beach is the fair I used as a reason for doing so. There are now twenty fairs down here in the first days of December every year and they’ve learned from past mistakes. They’ve gotten better and less mercantile in their execution—oh, it’s still very much about making money—but there is a lot more for the brain and the community that surrounds them. Pulse, Aqua, Seven, NADA, Select and the Walls Project were among the best fairs I’ve seen anywhere and there was an intimacy about the scale and aim of each project that was inclusive. The rest of them? Let’s just say they have some work to do.

You can’t beat the city of Miami though. It is a big, dumb celebration of skin and money. You can’t help but fall for its stupid charm. Only in Miami are sixty-year-old women in tube-tops and skinny jeans squired around by men in yellow suits carrying little yip-dos in one arm…it ain’t Wheaton.