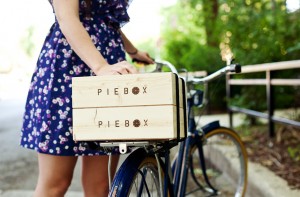 A true Chicago sustainable transportation blackbelt is never late, unless it’s the CTA’s fault. But if you’re running a little behind in your winter gift shopping, here are a few last-minute ideas for the walking, biking and transit enthusiasts in your life. Most of these nifty items are locally made and available at independent stores, which means a minimum of gasoline was burned getting the products to market, and by purchasing them you’ll be supporting the local economy. Plus, these presents will encourage your friends’ and family members’ healthy commuting habits. Can’t get much more politically correct than that.

Our city’s over-dependence on automobiles really makes you appreciate those rare spots where you can take a break from the sight, sound and smell of car traffic. Give the gift of tranquility with “Peaceful Places Chicago” by local journalist Anne Ford. Her book features over one-hundred serene locations, most of them accessible by transit, with many destinations for relaxing, strolling and biking. Some of my favorites include the Indiana Dunes, Bridgeport’s Stearns Quarry Park, The Magic Hedge bird sanctuary at Montrose Harbor, Rosehill Cemetery and the Osaka Japanese Garden in Jackson Park. $14.95 at Women and Children First, 5233 North Clark, anne-ford.com/peaceful-places-chicago-book. 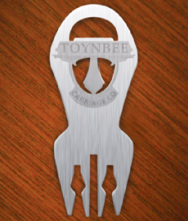 Columbia College sustainable design prof Carl Boyd recently launched his own company, Toynbee Carriage Co., producing handy accessories for urbanites on foot, bike and transit. The Spokebug is a clever little device that keeps your bike upright while you load and unload cargo. The Tuning Fork is an eating utensil that also incorporates a spoke wrench, earbud wrap and bottle opener. Boyd suggests you wipe off the spoke nipple lube before digging into your Pad Thai. Spokebug $42, Tuning Fork $22, shipping included, at toynbee.co.

Chicago transit authority Greg Borzo explores a little-known but fascinating chapter in local transportation history in his new book “Chicago Cable Cars.” Surprisingly, it was the Windy City, not San Francisco that pioneered the cable car boom, which in turn paved the way for trolleys, subways and elevated trains. The most colorful chapters detail the exploits of the South Side Car Barn Bandits and the ridiculously corrupt cable car magnate Charles Tyson Yerkes. The book is chock full of terrific period photos, sure to please steampunks and mustache aficionados alike. $24.99 at The Book Cellar, 4736 North Lincoln, historypress.net. 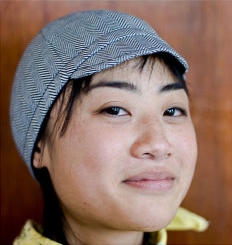 Bike Snob NYC joked that as soon as you get off a plane in Portland you’re presented with a handmade cycling cap, but Chicago’s no slouch in the headgear department either. Erin Rensink’s brand Kozie Prery makes unique bike caps and neckwarmers from recycled materials. Her cold-weather caps with generous earflaps are just the thing to keep your loved ones “Kozie” this winter. Caps $20-$40 at Roscoe Village Cycles, 2016 West Roscoe, etsy.com/shop/kozieprery.

The Chicago Transit Authority’s online giftshop has tons of great ideas for the “foamers” (train enthusiasts) on your list. My CTA rail map shower curtain has been great for helping me memorize the system while I brush my teeth, and the website now offers more than one-hundred transit-themed products. New items include smartphone covers inspired by the Sox/35th and Addison stops for baseball fans, toy trains based on the new 5000-series railcars and blown glass Ornament ‘L’ (get it?) cars for Christmas trees. Various prices, ctagifts.com.

A great gift for newbie cyclists is “Urban Bikers’ Tricks & Tips” by local writer Dave “Mr. Bike” Glowacz. Packed with informative photos and diagrams, plus amusing cartoons, the book provides sound advice on how to find, ride, lock and maintain your ride. For thrill seekers, Glowacz also tells you the best ways to “skitch” a tow from a motor vehicle, confront a would-be mugger and smash a windshield with your U-lock. $14.99 at Boulevard Bikes, 2535 North Kedzie, mrbike.com.

“Carless in Chicago” by Jason Rothstein, a thorough guide to navigating the Windy City by foot, bike, transit, taxis and car-sharing, would make a thoughtful present for someone who’s thinking about ditching their auto. The book outlines how going car-free can make you healthier and wealthier, and my favorite section is a travel guide that describes points of interest near every ‘L’ stop in the city. $15.95 at 57th Street Books, 1301 East 57th, carlessinchicago.com.

For the “retrogrouch” on your list, the local brand Winter Session makes classy, minimalist bags in muted colors with leather accents, many featuring old-fashioned waxed canvas, which makes them surprisingly weather-resistant. The Garrison shoulder bag works great for a CTA commute and fits nicely in a bike basket. The Roll-up is a simple case that’s handy for carrying bike tools and accessories. Garrison Bag $285, Roll-up $65, at Neighborly, 2003 West Montrose, www.winter-session.com. 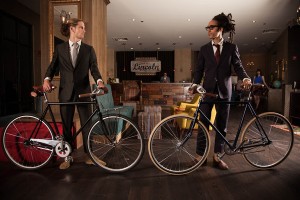 The Chief at Heritage Bicycles

Since just about all mid-price bicycles are made in Taiwan nowadays, it’s great that Heritage Bicycles, Chicago’s first bike store/coffee shop, sells locally made cycles that won’t break the bank. The Chief diamond-frame and Daisy mixte (a type of step-through frame) bikes are elegantly simple one-speeds that can be customized with racks, fenders, chainguards and other accessories. The shop also stocks a wide selection of stylish, American-made bike clothes and gear, and the sunny café is a nice place to take a break with a cup of joe during a hard day of shopping. Bikes start at $775, 2959 North Lincoln, heritagebicycles.com.

Like Heritage, PieBox is a business that combines bicycles with pastry, an unbeatable combo. These handsome raw-pine containers, made in Chicago, are designed to do only one thing: safely transport pie. The boxes stack nicely on a rear bike rack, and they also provide protection when you’re carrying the eponymous baked good on foot, bus or train. I must admit, I’m completely charmed by this concept. $35 at The Haymaker Shop, 5507 North Clark, piebox.com.

Chainlink Bar Night Meet up with some of the 7,000-plus members of the local bike-social-networking site for drinks at Cal’s Liquors, a Loop dive bar that’s a longtime messenger hangout. Thursday, December 20, 5:30-10pm, Cal’s Liquors, 400 South Wells, (312)922-6392, tinyurl.com/clbarnightcals; free.

Chicago South Side by “L” This train excursion traces the development of several South Side neighborhoods, including Bronzeville, Chinatown and the South Loop. Saturday December 22, Chicago Architecture Foundation, 224 South Michigan, (312)922-3432, architecture.org, 9:30am; $20.