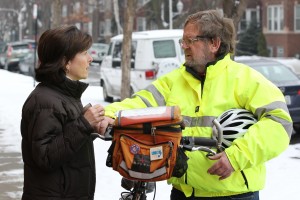 As “mini mayors, ” Chicago aldermen have a huge influence on the kinds of projects that are built in their districts. For example, a handful of aldermen have opted to use “menu money” discretionary funds to stripe additional bicycle lanes in their wards or bankroll innovative transportation projects, like the Albany Home Zone traffic-calmed block in Logan Square. On the other hand, they can stand in the way of progress, as when former 50th Ward Alderman Berny Stone put the kibosh on a bike bridge over the North Shore Channel in West Rogers Park.

39th Ward Alderman Margaret Laurino’s Far Northwest Side district includes parts of the Albany Park, North Park, Sauganash, Mayfair, Independence Park and Old Irving Park neighborhoods. The chairman of the City Council’s Pedestrian and Traffic Safety Committee, she’s probably best known to cyclists as the sponsor of a new ordinance that bans texting and cell-phone use while cycling. But she’s actually one of City Hall’s outspoken advocates for sustainable transportation. I recently caught up with Laurino at her ward service office, 4404 West Lawrence, to get her views on walking, biking and transit issues in her ward and citywide.

Tell me about your commuting habits. Do you ever get around the neighborhood on foot, on transit or by bicycle, or use those modes to get around other parts of town?
Communicating with residents and businesses within our neighborhood is always a challenge. One of the ways that I find most interesting is to get out there and walk down the street and talk to some of the businesses to see how things are coming along. I also have occasion to ride my bike, and I plan on taking the CTA Brown Line downtown later today.

Do you have any long-term goals for the Pedestrian and Traffic Safety Committee?
There are a number of things I think we can do committee-wise to improve safety. We need to push the envelope on a number of issues, like better street markings and crosswalks. How simple is that? We’re also going to be having some hearings soon on how these “Stop for Pedestrians” signs are working.

Do you have some of those in your ward?
I have them at three locations right now and I consider them pilot projects because truthfully we want to see how they actually are working before we install more. For example I’ve had requests for them to be on Peterson where there are two lanes of traffic. I think that would be a safety nightmare. Say one driver stops but the other motorist doesn’t know why the person in front of him is stopping and tries to go around him. How do you think the signs are working?

You’re the first person I’ve heard bring up the idea that they might be causing safety problems.
Well I wouldn’t say that, I’m just saying, think before you put them at a location. I suspect and I hope that our department of transportation has some criteria about where they would be safe and where they wouldn’t.

Where in your ward would you like to see speed cameras installed?
One location might be Foster Avenue from Pulaski to Cicero, in front of Gompers Park. I mean it’s oftentimes an area where cars really speed because for whatever reason, where there are no homes and it’s just wide-open parkland, people just seem to hit the accelerator. We’re also looking at doing a road diet, where we would make the street narrower through paint striping.

So you were the mastermind of the ordinance against using cell phones while biking. How did you get the idea for that?
It was during a committee meeting. When the former mayor of Bogotá, Colombia, [Enrique Peñalosa, a leader in the car-free streets movement] came to my committee last year we were talking about the kind of things that they do in his town to promote pedestrian friendliness and their bike lanes. And some of my colleagues at that time said, “Oh that’s great, but what about bicyclists that aren’t obeying the rules as it is, and why don’t we license bikes?” And they were coming up with some rather extreme methods.

These are other aldermen on the committee? You probably don’t want to name names.
No, I’m not going to name names! [Laughs.] However, it did give me the idea that there might be some things that we could look at and truthfully I have seen people, right on LaSalle Street, texting and biking. I mean, I’m talkin’ with both hands, all right? I’m not sure how they do that. Maybe these guys perform in the circus when they’re not doing that. So anyway, it’s common sense. Do we really need to pass laws for this? But apparently you do because people weren’t using common sense.

Since there was already a no-cell-phone-use-while-driving law you used the term “leveling the playing field for bicyclists and motorists.” So how has the bike ordinance been working out? Do you think it’s mostly served to raise awareness that it’s a bad idea to talk on a cell phone while biking?
Absolutely. It’s an education issue. Because truly if you go back and look at the police department, are they really pulling over everybody that’s texting in a car or talking on the phones? No, but they’ll get somebody here and there, just as an example. And I think that that’s legitimate. We need to send out the message that safety comes first.

You know one thing I’ll say about the bicycle ordinance is it has certainly put the issue more in my mind. Because when I’m riding my bike if my phone rings it’s tempting to keep pedaling and talk on the phone. It’s easy for me to do that. But nowadays I think twice about it and tend to pull over.
Good. You’re one of my success stories.

Lincoln Square Kidical Mass This kid-friendly bike ride starts by circling Wells Park and then taking off on a fun cruise around the neighborhood on quiet residential streets. Saturday, January 19, Wells Park gazebo, Western and Montrose avenues, chicagokidicalmass.org; 10:30am, free.