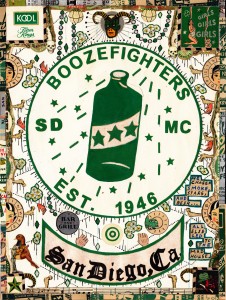 “Johnny. What are you rebelling against? What ya got?”—Marlon Brando, “The Wild One”

There has never been a better recruiting tool for motorcycle clubs than this movie.

It is based on The Boozefighters. One of the first-ever motorcycle clubs in Southern California—it’s actually based on the Hollister California “riot” in 1947—an uprising so laughably tame it actually amounted to little more than six or seven Boozefighters being arrested for drunk and disorderly for drinking and racing their big American bikes in the streets of  the small town by the remarkably pussy police force (only seven cops—two of them  near retirement—they almost wet themselves) over a  summer weekend that scared the shit out of the locals, who’d evidently never seen anyone piss in the street before.

It was not more dangerous than any small-town parade with a few rowdy drunks thrown in. Well, a reporter got a hold of it on a slow news day and decided to paint it as the end-all of civilization. The tale of a marauding gang of motorcycle hoodlums proved to be catnip for the Hollywood imagination as well.

Of the string of star-making roles Marlon Brando had in the mid-fifties, none produced more juvenile delinquents then ‘The Wild One.” Along with Lee Marvin, who played Chino (loosely based on Boozefighters founding member Wino Willie Forkner), Brando made it downright sexy to be a mouthy asshole on a motorcycle. Soon there were bike clubs all over the country, but nowhere did they have the lifestyle currency that they had in California. With lots and lots of road, through mountains, next to the sea, from San Diego to Big Sur, there was lots of American landscape to get lost in and to  marvel at from a huge, speeding  American Motorcycle.

It’s important to remember that clubs like the Boozefighters, the Flying Tigers and the Hells Angels were formed in the crucible of the second World War. The effects of fighting the war cannot be underestimated in the nihilism that came to characterize some of the nastier outlaw clubs. A great many young men went overseas fully expecting not to return, including my own father.

It is also important to take a longer view and realize this was always the case: consider, for example, William  Quantrill’s Raiders after the Civil War. The immense push westward as well, by nomadic groups of farmers, cattlemen, prospectors and snake-oil salesmen, attracted men who needed to get lost in the bounty and promise of America, and hoped to hell all of the hyperbole was true.

When ‘Wino Willie’ Forkner returned from World War II, he knew he wasn’t ready to settle into a middle-class life and become a regular taxpayer. It didn’t make sense to go from warfare one week to squaresville the next. Warfare had awakened the restless spirit in a great many of these returning vets as well as the fact that the hearing damage a great many airmen had incurred had inadvertently disqualified them from potential jobs in the still nascent aerospace industry.

They went to the Red Wing store and bought heavy-buckled engineer’s boots and strapped on steel: Harleys, Nortons and Indians tearing ass across the California landscape just because they could and nobody was going to tell them different. This was the birth of the one-percenters—the one percent who didn’t fit into polite society and didn’t fucking want to.

The Boozefighters never became an outlaw club. In fact, these days they spend a great deal of their time doing good deeds for kids and returning veterans.

They, like the Angels, are resolutely patriotic—a great many of them former soldiers, sailors and airmen. The clubs are very often structured like a military unit. There is also a great love for beer  in this club. In fact they describe themselves as: “A drinking club with a motorcycle problem.”

There are now Boozefighter chapters all over the U.S. and the U.K. as well as Japan. While they are not a criminal club, they are still not a bunch to fuck around with. They don’t back up from confrontation and there are always a lot of them.

There is an old saying among bike clubs  that is observed when they are making a public appearance as a club: Always bring a crowd.