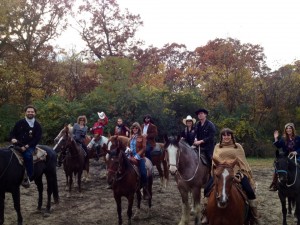 In the words of a t-shirt I once owned, “Life without horses? I don’t think so.” For a few girls I know, horseback riding is an urban luxury. With all the unbelievably cultured classes and workshops Chicago has to offer, sometimes the one that takes your interest most is slightly out of reach. Luckily, the suburban stables are just a short Metra ride away.

Local writer Robyn Pennacchia and friend Melissa Fisher are frequent riders who commute the brief distance from the city to the country in search of satisfying their itch. After going to Memory Lane in Willow Springs for the first time this year, both enthusiasts agree it’s one of the best stables the suburbs have to offer.

“It was something I’d always wanted to do, and I had kind friends who took pity on me and decided to take me. It was literally the best thing ever. It was glorious. The only bad part were the chickens, which were, of course, terrifying,” said Pennacchia.

Fisher is a more experienced rider. “I’ve gone to Memory Lane a few times now, but before that I volunteered a while back at Danada Equestrian Center. I’ve also taken lessons there too. I plan on going back to Memory Lane in the future. They’re open in the winter!”

Memory Lane is but a mere bus ride from the Willow Springs stop on the Heritage Corridor Metra line. This family-operated facility was founded in 1966 by the father of current owner Kathy Desimone, who took over in 2007. Memory Lane has a variety of year-round offerings for the equestrian-inclined, including parties.

Drop-in basic skills lessons are held in an indoor arena and cost a flat twenty five dollars per lesson. Though the lessons are more general, they teach skills based on the age and abilities of class participants. For non-riders who enjoy barnyard novelties, Memory Lane also features their own thirty-inch mini-horse named Taco in the petting zoo.

“Riding horses is a relaxing experience for me. I have a lot of anxiety sometimes and I find that being on a horse is a calming experience. And being out in the suburbs is a nice break from the city,” concludes Fisher. (John J. Accrocco)