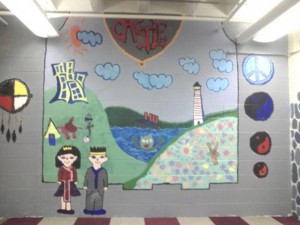 A few years ago I needed a job but was sick of waitressing. An acquaintance, Hayley, suggested I work for her at her afterschool program, Beacons. We were sitting in the back patio of a bar where our friends DJed, drinking beers. Though I repeatedly vocalized my self-doubt about being responsible for an entire herd of children, she insisted I’d be fine.

It wasn’t until my interview that I began to think maybe I’d actually make a decent youth worker. Hayley and I discussed how we’d both gone to afterschool programs growing up. All at once, visions of past counselors resurfaced with sweet memory.

There was Steve, the lanky long-haired goofball, who talked like Scooby-Doo whenever he saw tears. He and another counselor, Paul, were in a funk band called Elmer Funk. Paul and I played drawing games where we’d trade off illustrating the same piece of paper. He drew a lot of guys in space with afros, wearing platforms and star sunglasses. One day, the entire program, K-8, was sitting in a giant circle in the gym. Steve and Paul decided to teach us the chorus to “Atomic Dog”—“Why must I feel like that? Why must I chase the cat? Nothing but the dog in me”—and had us sing it in rounds. I didn’t know who George Clinton or Bernie Worrell were but I thought Steve and Paul were awesome.

My first day at Beacons was nuts. No amount of training can prepare you for that day when a program starts. But the next day you’re ready for it. My job came naturally. I led my group in the same activities I’d loved as a kid, like papier-mâché piggy banks and team Pictionary. I remembered a trick I’d learned using an old transparency projector to enlarge and trace images. Employing that technique, my group of middle schoolers and I completed two murals. We were only in each other’s lives briefly. I can only trust I have helped them better understand who they are in this world.

Today, P-Funk is my all-time favorite band, in part because of Steve and Paul, though they’ll never know. (Jessica Burg)