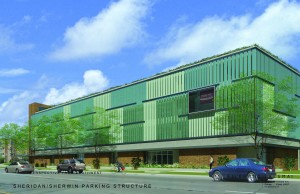 Rendering of the proposed garage courtesy of Tawani Enterprises

Colonel J.N. Pritzker, one of Chicago’s wealthiest, most influential residents, is a historic preservationist and a bicycle advocate. As an heir to the Pritzker family fortune and longtime Rogers Park resident, the billionaire has used his money in creative ways to help revitalize the community.

In 2004 his investment firm Tawani Enterprises began buying residential properties in the neighborhood, renovating and leasing them. Some of the company’s holdings include the Mayne Stage theater, Act One gastropub, Cat’s Cradle bed and breakfast and the Emil Bach House, 7415 North Sheridan, a Prairie-style home by Frank Lloyd Wright, currently undergoing a faithful restoration. As an avid cyclist, he bankrolled the latest edition of Active Transportation Alliance’s Chicagoland Bicycle Map, and he occasionally pedals in Critical Mass, the anti-car bike parade.

So I’m puzzled why Pritzker’s company wants to tear down an attractive, historic house, a stone’s throw from the beach in Rogers Park, and replace it with a parking structure for 250 automobiles. The garage would largely serve Bach House visitors and residents at Farcroft by the Lake, a twelve-story tower at 1337 West Fargo, built in 1928, which Tawani is currently renovating into eighty-four upscale rental units. Both buildings are located only a few minutes walk from the CTA Red Line’s Jarvis Station. Eighty-four spaces would be set aside for short- and long-term paid parking for the general public.

The firm would build the 181-foot-long, four-story garage on three parcels of land at the southeast corner of Sheridan and Sherwin. The land is currently occupied by a small surface parking lot, a vacant lot where vendors sell pumpkins and Christmas trees in season, and a handsome, ninety-year-old house built of cream-colored brick. The two-story home currently houses the Shambhala Meditation Center, which is moving to the West Loop, and it sits on a pretty little yard with several tall trees, a rare patch of green along highway-like Sheridan.

In fairness, the garage would be about as attractive as any building can be whose sole function is to warehouse cars. Although it wouldn’t include retail space, the red-brick structure would be wrapped in green recycled channel glass panels, alternating between matte and reflective finishes to create an interesting texture. After the 49th Ward zoning committee complained about the elimination of green space, Tawani altered the design to include about 2,400 square feet of grass and planters at ground level plus additional planters along the edge of the roof parking deck.

I didn’t hear back from Pritzker by press time but Tawani chief of staff Mary Parthe fielded my questions about why they think it makes sense to demolish a historic home and build space for hundreds of cars in a dense area well served by transit. “The Shambhala house is a beautiful structure but there’s been a lot of deferred maintenance, and I’m not sure we could find another use for it,” she said. “We already have a B&B. Our parking study showed there’s a parking shortage in Rogers Park, so [the garage] will be beneficial to the entire community.”

Since the Farcroft formerly had no off-street parking and is located steps from the CTA, won’t the new garage encourage its residents and other Rogers Parkers to choose driving over transit, creating more congestion and worsening conditions for walking and biking? “We don’t think we’re going to be increasing the use of cars versus the CTA,” Parthe responded. “If people are using public transportation in Rogers Park, usually they don’t own a car, and I don’t believe we’re encouraging them to buy one. We would love to go completely green but the reality is people still drive cars and with the Farcroft we know these people will have cars.”

Building the garage would require a zoning change and, because the lots fall within the Lakefront Protection District, review under the Lakefront Protection Ordinance and approval by the Chicago Plan Commission. 49th Ward Alderman Joe Moore has been seeking community input on whether to give his blessing; he will probably make his decision later this winter.

Last week more than a hundred residents showed up for a raucous, three-hour public forum on the project at a senior center near the Shambhala house. “This is the next step in the process of helping me to determine whether to support the proposal, to oppose it or support it with modifications,” Moore said in his intro. “So, no, I have not decided one way or the other. That is the purpose of this meeting tonight.”

Representatives from Tawani gave a presentation on the garage’s features, touting its environmentally friendly building materials and possible inclusion of parking spaces for I-GO or Zipcar vehicles, charging stations for electric cars, and bike racks. Traffic consultant Tim Doran said their study shows that the facility will have minimal impact on neighborhood traffic. “We didn’t just make these numbers up,” he said. “Remember, a lot of this traffic is already circulating in your neighborhood looking for other parking places.”

When the floor was opened to comments, a few attendees voiced support for the structure. In one of Chicago’s most ethnically and economically diverse communities, where poverty and homelessness are major issues, several people stated that parking is “the biggest problem in the neighborhood.”

But judging from applause levels, about three-quarters of the crowd opposed the plan. “It’s just too big guys,” one man said to the developers. “I’ve lived on Sherwin for eighteen years and now I’m going to have to walk my kids past all those cars. It’s going to inject a ton of traffic onto our streets.”

“Does this neighborhood have a parking problem?” asked a woman. “It could. Is it the worst problem in our community? I don’t think so. You know, there’s a song about paving paradise to put in a parking lot. And so you’re taking the last remaining place where there’s open space and a yard and a pumpkin patch and paving that over from lot line to lot line.” She argued Chicago is still negatively impacted by the auto-centric planning policies of the Urban Renewal era. “Why don’t we use what we’ve learned and not do that again?”

1 Comment
Inline Feedbacks
View all comments
Pritzker: My New Garage Will Fight Congestion, Is a Symbol of Democracy | Streetsblog Chicago

[…] Chamber of Commerce voted unanimously against the project. And judging from the applause levels at a community meeting attended by 100-plus residents, about three-quarters of those present opposed the […]