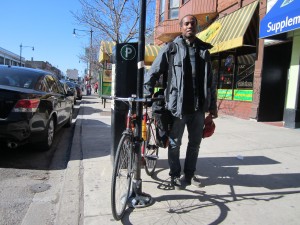 “Parts of Windhoek, Namibia’s capital city, and the South Side of Chicago are actually eerily similar, ” says Dustin Gourdin, a PhD student in the University of Chicago’s sociology department, over coffee at Hyde Park’s Valois Cafeteria. “You see a lot of the same issues, in terms of transportation challenges and youth opportunities. Hopefully we can figure out ways to make things better in both places.”

Since 2009 Gourdin, twenty-five, has made three research trips to Namibia, a nation of 2.1 million people just northwest of South Africa. He’s been studying the Bicycling Empowerment Network (BEN) Namibia, a nonprofit that provides disadvantaged local people with efficient transportation and job opportunities, as well as other non-governmental organizations.

Since gaining independence in 1990, the country, with an economy based on mining, agriculture and tourism, has become an upper-middle-income nation. Gourdin is exploring the connection between US-sponsored empowerment programs and Namibia’s recent macro-level growth. Meanwhile back in Chicago, he’s involved with several groups that encourage cycling in low-income neighborhoods and communities of color.

Born in South Carolina, Gourdin first got passionate about bikes as a college freshman at Furman University in Greenville. After the brake cables on his Walmart beater snapped, he Googled “brakeless bicycle” for repair instructions and stumbled upon a YouTube video called “Mash SF” of guys riding fixed-gears around San Francisco. “It had an edge to it, like a skateboard video,” he recalls. “I adopted that philosophy: ride a bike the way you want to ride.” He converted his mom’s old road bike into a single-speed and eventually saved enough money for an IRO Cycle fixie. He and his buddies formed a bicycle crew called the Rolling Riot, cruising the streets of Greenville and its Swamp Rabbit Trail.

A rap fan, Gourdin became aware of the African conflict diamond phenomenon, where sales of diamonds mined in war zones bankroll bloodshed, through the track “Diamonds Are Forever (Diamonds From Sierra Leone)” by Kanye West, as well as the movies “Blood Diamond” and “The Last King of Scotland.” He soon joined a student group called Africa Rising, which promoted social justice on the continent, and then got the idea to study abroad in Namibia.

“I was looking for a way to bind my passions for biking and social justice,” Gourdin says. He focused his research on BEN Namibia, which receives shipments of bicycles donated from abroad and distributes them to low-income people via community bike shops housed in converted shipping containers. Despite the country’s strong national economy, roughly half of the population lives in poverty. “You see a lot of growth that benefits small pockets of the population that doesn’t necessarily translate into opportunities for people at ground level, especially urban youth,” he says. BEN’s shops teach mechanic skills to these young people and help them develop bike-powered businesses.

One of BEN’s most successful programs provides bicycles to the mostly female healthcare workers who tend to Namibia’s large HIV-positive population. Largely desert, the country has the world’s second-lowest population density after Mongolia. Bikes make it much easier for the caregivers to serve their clients in remote villages.

BEN accepts shipments of cycles from sister organizations all over the world, including Working Bikes Cooperative in Little Village, where Gourdin currently volunteers, sorting spare parts and loading shipping containers. “It’s been really interesting to watch the process play out in Chicago and then see how it turns into results in Namibia,” he says. “I got to see firsthand the people who get employed by these projects and programs and how it changes their lives.”

Gourdin has also witnessed the power of bicycles to transform lives through his work at Blackstone Bicycle Works, a community bike shop and youth education program in Woodlawn. “It gives a lot of neighborhood kids an opportunity to learn about bicycles and transportation,” he says. “They gain some independence and autonomy from their ability to travel on their own, and it gives them something positive to do after school.”

He also rides with Red Bike and Green, a group that promotes cycling to African Americans as a path to health, wealth and environmental sustainability. “They’re a really neat organization,” he says. “For me, coming from South Carolina, seeing a contingent of black urban cyclists was something new.”

Gourdin sees many parallels between the economic, health, education and transportation challenges facing low-income folks in the Namibian capital and their counterparts on the South Side. “Windhoek has a lot of infrastructure issues,” he says. “There are enough roads but there’s just not a great public transit system and there are virtually no bicycle lanes—that’s been something that the people at BEN have been pushing for.”

“It’s similar on the South Side,” he says. “We could use more consistent public transit here, and people could really benefit from using a bike as a form of transportation. You need to take a balanced approach to community development, including things like after-school programming and access to healthcare, which should be a basic human right. But providing good transportation options is really in that holy grail of what needs to be done to build a community.”

Gourdin recently received grant money from the U of C’s Council on Advanced Studies and he hopes to return to Namibia this summer to continue his research. “Every time I go I think it’s going to be my last,” he says. “But you end up building a relationship with people and organizations and you start to get a vested interest in seeing them succeed.”

He’s looking forward to riding a bike in Windhoek again. The city is located in the highlands, about one mile above sea level, which can make breathing a challenge for new arrivals. It’s also got plenty of seriously steep roads. “The hills suck to ride up but once I reach the top and get to coast down, that’s basically the happiest I ever am.”