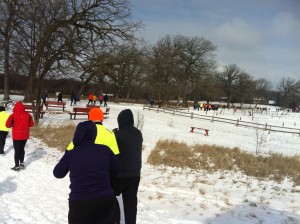 There’s something about running through a fresh layer of snow that’s both refreshing and exasperating at the same time. On one hand, it’s the kind of experience that connects you with the sport of running in its purest form, just barreling along through whatever’s in your path. But on the other, boy is it tough. When rolling hills are involved, a few inches of snow can turn a trail run into an adventure. And that’s exactly what the Fox River Trail Runners’ Hickory Knolls Trail 8K (known simply as “Trail Race #2” in their Winter Challenge Trail Series) was: a wooded adventure.

Adding an additional three kilometers to last year’s inaugural Hickory Knolls 5K Trail Adventure, race organizers sought to turn a winding, snowy course into a legitimate challenge. Despite some repeated sections (and one ill-advised course crossing that caused some clustering), this year’s course expansions were all welcome changes to any runner looking to tackle a winter trail race offering more than just running in the cold.

The Hickory Knolls Discovery Center once again provided a nice basecamp for the race, giving runners a place to stretch, store their gear and chat before and after the race. What was clearly missing from this race, though, was a goodie bag and any type of awards ceremony. 177 participants may be a pretty small field, but it still offers enough competition to declare a winner, even if organizers also plan to tally finisher totals for their entire three-race series. For $40, participants deserve more than just a race bib.

Price: $40
Course: A challenging course through the rolling hills of the Hickory Knolls Nature Area in St. Charles. The fresh snow made the steep hills (and even some of the straightaways) into imposing challenges. Repeated sections were placed far enough apart not to cause overlap but course crossings should be avoided at all costs, especially on a tough course like this. Runners shouldn’t have to wait for runners going in the opposite direction to cross before taking off themselves.
Organization (gear check, etc.): Basecamp at the Hickory Knolls Discovery Center was warm and spacious with neat animal exhibits to check out. No real gear check was provided, but the race was small enough that most runners either left their excess gear in their cars or stashed it against a wall. Course support was great, though the water station was unmanned. No awards ceremony? Disappointing.
Goodie Bag (includes shirt): Nothing but a bib.
Weather: Absolutely perfect for a snowy trail run: mid-twenties with the sun shining. (Zach Freeman)