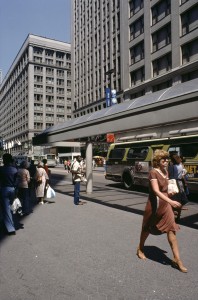 When I was a bike messenger in the early nineties, the State Street pedestrian mall was the bane of my existence. In 1979 under Mayor Jane Byrne, the city closed the Loop’s main retail corridor to all forms of traffic except buses, taxis and delivery vehicles in an effort to bring back customers who had been drawn away to suburban shopping centers and the burgeoning Magnificent Mile. That meant I had to detour around State and access addresses along the strip via intersecting east-west streets.

Ultimately the pedestrian mall was judged a failure, and in 1996 under Mayor Richard M. Daley the wide sidewalks were jackhammered to make way for private automobiles again. That renovation, the $24.5 million State Street Revitalization Project, which included attractive Beaux Arts street lamps, ‘L’ entrances and other fixtures, is credited with turning the historically prosperous street back into a bustling retail district.

Laura Jones from the Chicago Loop Alliance provided background on the rationale behind creating the State Street mall. “When downtown started to empty out in the early seventies, business leaders from the Greater State Street Council went to the city with the idea of creating the pedestrian mall. They wanted to make State Street more like a suburban shopping mall, and also people were becoming more energy conscious, so they decided to try a transit mall.”

State was redone with the jumbo sidewalks and bumpouts to make bus loading easier, and octagonal asphalt pavers, which tended to come loose. There were large bus shelters with bulbous Plexiglas roofs, info booths, carts selling popcorn and Italian ice, and a twenty-five-foot-tall circular stainless-steel sculpture at Washington Street.

But Jones says many people felt that removing car traffic and widening the sidewalks made the street feel deserted and unsafe, which only seemed to hasten the economic decline. It didn’t help that the business mix at the time included a motley assortment of discount stores, theaters showing exploitation flicks, adult bookstores, strip clubs and flophouses. During the seventeen years the mall was open, seven major department stores closed, including Montgomery Ward, Baskin, Wieboldts, Bond’s and Goldblatt’s.

“In hindsight, it’s tempting to say, ‘What were they thinking?’” says Tim Samuelson, cultural historian for the city of Chicago. “But in the context of their time, urban planners were working in uncharted territory, and genuinely hoped that transposing successful attributes of outlying malls to older downtown shopping districts would give them similar vitality.” He thinks the tacky design of the street furnishings was part of the problem. “The 1970s modernism of the mall was quickly doomed to looking very dated and was never a comfortable fit for the surrounding buildings.”

“My main observation is that State Street never was a real pedestrian zone,” says Randy Neufeld, director of the Chicagoland Bicycle Federation, now the Active Transportation Alliance, during the eighties and nineties. “It was a bus mall with all the fumes and stress that go along with it.  So it wasn’t a pleasant place. In Europe you have plenty of ped streets with trams or light rail but not buses. Trams work partially because you don’t need to define street space and sidewalk space.  You can create a street where you can walk and hang out on any portion.”

He cites State Street in Madison, Wisconsin, as an example of a more successful U.S. transit mall, and Boulder’s Pearl Street as a true pedestrian street.  “Look at real pedestrian shopping streets like Broadway and Times Square in New York, and every major city in Europe. We’ve never tried that in Chicago.”

Madison’s State Street, which runs from the Wisconsin State Capitol to the University of Wisconsin, is a transit mall (with biking allowed) for six blocks and then a pedestrian mall for two blocks near the campus. It’s a vibrant area with plenty of theaters, shops and restaurants with sidewalk cafes. Arthur Ross, the city’s pedestrian and bicycle coordinator, says the mall, which opened in 1974, is still successful because there’s activity day and night due to the mix of uses. “It has stood the test of time,” he says.

Pearl Street, which opened in 1977, is an even more lively district, which is completely pedestrianized except for the cross streets. It features multiple sculptures, including statues of Colorado fauna like bears and mountain lions, fountains, carts selling knickknacks and food, massage therapists and street performers like acoustic musicians, jugglers, acrobats and fire eaters.

City planner Molly Winter says Boulder went into the project with eyes wide open. “It was done very carefully and really well designed with excellent materials.” Since four blocks of car parking were removed, the city built five strategically placed garages over the next thirty-five years. Parking revenue is used to provide free transit passes for some 6,000 downtown workers, which in turn frees up spaces for shoppers.

“No,” says Neufeld bluntly. “You’d have to move the buses. You could do something more like State Street in Madison, but not a real ped street.” He thinks Oak or Rush streets in the Gold Coast, or Clark or Broadway streets on the North Side, would be much more suitable.

Jones doesn’t write off the possibility of fewer automobiles on Chicago’s State Street in the coming years. “There’s a whole new crop of people who do not remember the mall who are talking about doing congestion pricing [charging a toll for driving into the Loop to discourage unnecessary car trips],” she says. “Everything old is new again. But the old-timers would be horrified.”