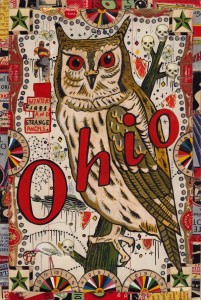 Among the cultures of the American Indian tribes, there are a myriad of beliefs about the owl. An owl on a rock near a lake or a river signified a particular tribe’s ownership of that place for fishing and trapping. The Iroquois of Ohio also believed that the owl was a protector from water monsters and devils, which would drown those who wandered too close to the water at night.

The Apache believed that a dream of an owl was a harbinger of the nearness of one’s death. Cherokee medicine men and shaman thought screech owls had the power to bring on illnesses as punishment. The Cree believed the small owls could summon the spirits with their other-worldly whistles and cackles.

A great many tribes thought owls could travel between the worlds of the living and the dead. The Dakota Sioux believed the Burrowing Owl held sway in the underneath—the world below the ground—and also acted as a protector for brave warriors, whereas the Hopi believed this same owl to be a god of the dead and a guardian of fire and keeper of all things underground, even seeds. They called the bird Ko’ko which means “watcher of the dark.”

The Nez Perce believed that owls were both the deceased person and their newly released soul, and the Mojave peoples believed that, after death, one would become an owl as an interim stage, before becoming a water beetle and then, ultimately, pure air. The Navajo were sure that listening to the owl, a man could hear his future.

I’ve loved owls since I was a kid. In high school, I had a Screech owl I’d found for a few years before bringing it to Willowbrook Wildlife Center and having him repatriated to the wild. I was a rather weird knot of contradictions as a teenager and not happy about school at all. I whiled away a lot of hours drawing this owl, Oliver, and he was a good companion for an odd kid who didn’t fit very comfortably into the world yet. I’d chop up lean red meat dipped in egg yolk and he’d fly to my fist across the basement emitting purring cackles and whistles and then he’d turn his head all the way around listening for prey. By this time I also had a couple of genuinely scary-looking but harmless Chuckwalla lizards until one escaped and Oliver ate the poor bastard. What fascinated me was his stillness, his icy quiet and the sense that he was always waiting.

All throughout literature, owls are a symbol of ominous portent. An owl supposedly sang to Nero while Rome burned. Shakespeare is loaded with owls as symbols of plagues, wars and other ill winds, but that is the English—they’re pussies about stuff like that. One of the most lasting myths is the owl being a symbol of wisdom. Which is utter fallacy: even for birds, they’re not particularly smart. They kill themselves flying into shit all of the time. It’s the eyes. They look smart because of the big eyes.

I worked part-time at a pet store, which helped me feed Oliver the mice he ate every day. He had a big wooden box as a cage with a few perches in it, and from time to time, I’d let him fly freely around the basement. There were NO mice in our basement.

A day later he would regurgitate a pellet of fur and tiny bones—a casting—which is how you figure out what they feed on. They will kill and eat as many rodents as are available. They love the fuckers.

I suspect the reason I notice so many more owls around the city now is  twofold. One is that now I actually look for them—they’ve probably always been around—and two, rats and mice. This city is a smorgasbord of rodent vermin. A dedicated Barn Owl could pick these fuckers off all day and his only worry would be getting too fat to fly.

The sense most acute in owls is their hearing. Everyone thinks it’s eyesight. Not really. Owls hunt by stealth. Their wings are billowed and silent and their sense of hearing is astonishing.

Last winter, I missed an opportunity to see a Snowy Owl up around Montrose. This is an owl that usually has no business being south of the Arctic Circle, but given climate change and a paucity of food, they’ve had to forage much further south to feed themselves. Global warming has affected almost all species of bird’s migration paths and destinations so much so that lately South American birds have been spotted here in Illinois and Japanese Robins in the western states.

There is an owl that I see in Ukrainian Village once in a while. It’s a Short-eared Owl, and I wonder what he is doing here. I’ve only ever seen this kind of owl around open fields before. I guess, like us, they go where the food is.

I’ve seen a lot of Great Horned Owls in the city. Logan Square, with its bounty of old-growth trees, is lousy with them, and it is a good environment for them—all of the rodents they can eat.

The truth is, once you look for them, you begin to notice them, mostly at dusk and dawn, when they hunt.  Our night watchmen.