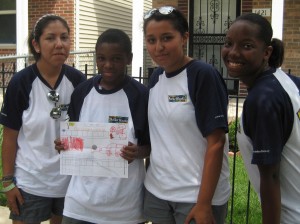 Underserved neighborhoods are called that for a reason. They generally don’t receive their fair share of city services, and they tend to have less green space, worse conditions for walking and biking, and higher crash rates than wealthier areas, which can discourage residents from being physically active. Often part of the problem is that community members are unsure how to get help with issues like cracked sidewalks, broken streetlights and speeding traffic.

For three years the Active Transportation Alliance’s Better Blocks program has been working with folks in low-income neighborhoods to solve these problems. Staffers have led more than fifty workshops at community centers and block parties, brainstorming with adults and kids on ideas for making their block safer and more conducive to walking, biking and other forms of healthy recreation. Then Active Trans has helped the residents lobby the city government to make these infrastructure improvements a reality. Community liaison Cynthia Bell filled me in on the nuts and bolts of the program.

Tell me about Better Blocks.

The program is basically a one-hour workshop we offer in underserved communities. We’ve been working in North Lawndale, Little Village, Garfield Park, Humboldt Park, Austin, Englewood, Pilsen, Auburn/Gresham and Back of the Yards. We try to reach out to existing community groups: block clubs, parent groups at the schools, community-based organizations, businesses and any group that would like to evaluate their block. We empower the residents to make changes to the built environment on their block.

The workshop consists of a thirty-minute discussion of what transportation modes people are using and why they’re using them, going over crash data for their area and talking about how they can make changes. The second half is actually going outside and looking at the built environment. We do a walkability assessment, walking from corner to corner, documenting any issues and taking pictures of them. Afterward we create a final report for that workshop. Then we work with elected officials and city departments to get those issues fixed.

What are some improvements that have come about because of these workshops?

We’ve had some small wins and some big wins. We’ve been able to help get speed humps put in and get alleys turned into one-ways. We worked with a block club in North Lawndale where people use the alley to walk to the Pink Line’s Kostner stop, but there was standing water in the alley, which was keeping people from accessing the train. We worked with the residents and the alderman, and now they have a [water permeable] “green” alley, with a speed hump and good lighting.

We’ve been able to get crosswalks installed and restriped, and we helped get a “road diet” [removal of excess car lanes] done on Humboldt Boulevard in Humboldt Park. We worked with the park district and residents who were complaining that it was difficult to enter and exit the park. There was a blind spot for drivers, and problems with speeding. So they took out a travel lane and built a pedestrian refuge island, so now it’s safer for pedestrians to cross the street and drivers to access the park as well.

We’ve also been able to get bus stops moved to different spots. If a sidewalk is narrow and there’s a school right in front of it, with a lot of pedestrian traffic before and after school, that can be an issue. We can move the bus stop to the other side so that when kids are getting out of school the sidewalk is not congested.

Who worked with you on this?

It was [former community liaison, now bike parking manager] Tony Giron and me. He was focused on the Hispanic community and I was focused on the black community. And we hired student interns to help us during the summer. Our plan was to do workshops at block parties, but at first it was hard to engage the adults because they were so busy getting the kids situated. So that’s why we got the interns to work with the children, because we figured if the youth were occupied, then we’d be able to work with the adults.

The interns did a mini Better Blocks workshop with the kids, which included talks about the transportation modes they’re using and why, and they asked the children what they would like to see on their blocks and what they would like to see changed. And then the kids did an activity where they drew a picture of how they want their block to look. We had kids draw speed humps and basketball rims. We found that kids would like to see more things on the street that would help them be physically active, like speed humps so that they could play in the street with the basketball hoops and jump ropes.

Do you have any projects you’re working on besides Better Blocks?

Yes, Better Blocks was funded for three years and we’re not ending it but we’re transitioning the program so it can be sustainable. So even though we were able to work with residents and groups on a block-by-block level, we want to create a hub for these participants and these groups for keeping the conversation going on transportation issues.