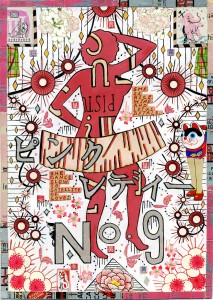 Voila, the Pink Lady! A perfectly wretched cocktail first made in the 1930s, designed with the idea of separating young women from their virtue.

I knew a prim and pert girl in high school named Elizabeth who would leave heel marks on the ceiling after two of these abominations… followed by twenty or so minutes of ruinous projectile vomiting. Two Pink Ladies would induce nymphomania and nausea with equal ferocity. She was nicknamed “The Puker.”

I’ve noticed that these kinds of cocktails have come back into vogue. Bars now have “beer programs” and “sommeliers.” Fuck me—the game of drinking has gone to hell since I quit.

In Japan, these girly drinks are very big, as is karaoke, some bars locking you in from midnight till five in the morning to try out your pipes on classics like the Divinyl’s “I Touch Myself” and Meatloaf’’s “I Would Do Anything For Love.” Lots of cocktails are added for intestinal fortitude, as well as to clear one’s throat.

Men over there drink to get hammered. At 7:30 in the morning, they are neatly dressed in black suits, briefcase in hand, every hair in place—the perfect picture of the salaryman. After five o’clock, these guys get snot-flying, pie-eyed, shit-faced drunk at the little twelve-seater bars around the train stations, as well as in the karaoke joints.

They drink for the same reasons American men used to—to forget the shit-heads they work for all day, the miserable ass-wipes who sign their paychecks. They hammer back Scotch on the rocks before going home just to get some semblance of their balls back. I can remember when I rode the train seeing guys at the Northwestern Station two-handing go-cups filled with martinis for the way home on the train mumbling to themselves and each other about the grind, the boss, the game—life painted into one shitty corner-cubicle of tepid, tensile, life-sentence longing.

I quit drinking thirty years ago, before it became sophisticated and fun. I’d never heard of a microbrew back then. Twenty-dollar Belgian ale? Nope. The most exotic thing I ever drank? Sangria, and I’m still not sure what the hell that wretched shit is made of.

I was one of those construction workers who drank long-necked Budweisers and shots of Beam. On payday, maybe a Heineken or two just to not feel like a wage-slave. If you won the football pool? maybe you buy the house a round. The joints I drank in didn’t have blenders, or fruit in the fucking drinks. They were like the joint in “It’s a Wonderful Life”—the version of Jimmy Stewart’s bad future—where guys went to get drunk fast, and got tossed out on their asses if they were a pain in the balls or started talking shit. There were hard-boiled eggs, Slim Jims and pork rinds—this was their version of a bar menu.

The new kind of bars make me happy I no longer drink. Cocktail “program”? My only program was don’t run out of whatever the fuck I’m drinking. Bars were places to nurse the day’s psychic wounds and strap on some liquid armor so you could get through the next day without choking the living shit out of some hard-on at work or back-handing the asshole next-door who cuts his grass at 7am.

Bars are different now, for better and worse. The food is better. The beer, I hear, is better and I will say the joints are considerably cleaner than I remember—even the dives—which used to smell like equal measures of piss and Pine-Sol. Joints like The Violet Hour are downright elegant—it’s like walking into a Robert Mitchum movie from the late forties—or the refurbished Charleston. The Chuck used to be a dump—a very likable dump—but now it’s spiffed up and has a good DJ and is actually a night out rather than a corner saloon.

To tell the truth, I don’t really know of any corner bars anymore. It seems that’s all there was when I was a kid and now I don’t know if I could name one. In fact, I can’t think of a single joint you can bring your dog into.

You can however get a Pink Lady, a Sidecar, a Greyhound, martinis flavored with every douchey flavor under the sun—when I hear the word “Appletini” I despair of the species. Drinks are now “infused” with things. It’s annoying.

Tell you what, Slappy. How ’bout just infusing it with gin or vodka or bourbon, the actual booze one is drinking, and to the mixologists putting flower petals in drinks? How ’bout keep the fucking weeds out of my drink? Thank you.