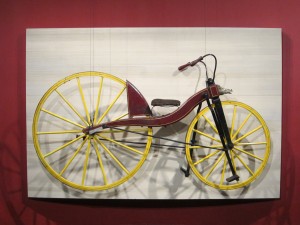 The new exhibit “The Art of the Bicycle” at the Museum of Science and Industry does a fine job of tracing the evolution of the bike from the dandy horse, a primitive wooden contraption pushed along with one’s feet, to today’s high-tech steeds. While last year’s terrific “Bikes! The Green Revolution” show at the Peggy Notebaert Nature Museum celebrated cycling culture in general and the Chicago scene in particular, the MSI’s exhibit focuses on the history of the machines themselves. It features nine rarely seen historic bikes from the museum’s collection, newly restored for the show, plus a gaggle of modern rides.

“For 200 years people have continuously reinvented the bicycle,” reads the intro to the exhibit. “With each new decade new designs and technologies improved the popular machine, making riding safer, more reliable and more fun.” Amusement was probably one of the main motivations when German Baron Karl von Drais built the first verifiable dandy horse, a pedal-less, steerable, two-wheeled vehicle he dubbed the Laufmaschine (“running machine”) for cruising around his large garden. A 1931 replica of an 1818 Draisienne, as the French called it, is on display, and the clunky, green-and-gold vehicle looks like it would be a blast to scoot down the Lakefront Trail.

Drais’ invention became a fad among fashionable Europeans, but in 1839 Scottish blacksmith Kirkpatrick McMillan made the device much more useful by adding rudimentary pedals, connected by rods to a rear crank. A replica of the McMillan on display features a larger rear wheel and a carved horse’s face on the headset.

By 1860 the Michaux Company out of France was producing the Velocipede (“fast foot”), a lighter machine made out of metal instead of wood, with pedals on cranks directly attached to the front hub. While faster than previous vehicles, these were too unstable to be useful for transportation and were mostly ridden indoors by wealthy young men. According to the exhibit, these bikes were known as boneshakers because of the uncomfortable ride produced by their ironclad wheels.

The bicycle craze really took off in the late 1800s with the advent of high-wheelers, also called penny-farthings because the unequally sized wheels looked like the two coins. The large front wheel with attached pedals, along with solid-rubber tires, produced a faster, smoother ride, which made these vehicles practical for the open road. But it was also easy to fly head over heels if you struck a small bump in the road, a mishap known as “coming a cropper,” which inspired Mark Twain to write, “Ride a bicycle. You will not regret it if you live.” The American Star high-wheeler shown at the MSI is unusual in that its rear wheel is the larger of the two, and the pedals move up and down instead of in circles.

By 1890 the safety bicycle appeared on the scene, bringing cycling to a wider demographic than just fearless young daredevils. With a diamond-shaped frame and equal-size wheels, these vehicles were easier for females to ride, which gave women new independence and an excuse to wear bloomers instead of floor-length dresses. This prompted Susan B. Anthony to declare, “The bicycle has done more to emancipate women than anything else in the world.” Last month Saudi Arabia legalized bicycling by women, which will hopefully lead to more liberation in the future. A turn-of-the-century Lozier safety bike on display has wire-spoked wheels, fenders and a chain guard, innovations still in use today.

A 1910 safety bike by Huseby Co. has pneumatic tires, a new invention that made cycling even more comfortable. This technology was pioneered by John Dunlop, an Irish veterinarian who wanted to keep his young son from getting headaches when he pedaled his tricycle on rough roads. The attractive vehicle is unusual in that its frame is made of tubular wooden sections connected by metal lugs. From there the show skips almost half a century to a 1955 Columbia cruiser featuring balloon tires, a sleek headlamp and a spring-loaded seat. A 1965 Sears Spaceliner has a Jetsonian appearance courtesy of famed industrial designer Viktor Schreckengost, inspired by the Space Race.

The contemporary models shown were less interesting to me, since most of the styles could be found in any well-stocked Chicago bike shop. But a few caught my eye, like the Velo Ikawa (“coffee bike”), a long-tail used by Rwandan farmers to transport beans to market, and the Renovo R4 racing bike, with a sexy hardwood frame that absorbs road vibrations.

By far the weirdest steed on display was a chunky, all-cardboard bike by Israeli inventor Izhar Gafni. It’s waterproof and fireproof, and it retails for only about $20, so Gafni hopes it will make cycling more accessible to people around the globe. “It’s strong, it’s durable and it’s cheap,” he says in the accompanying video. “But what I like most about it is that it’s made of cardboard.”

Through 2018 at the Museum of Science and Industry, 5700 South Lake Shore Drive