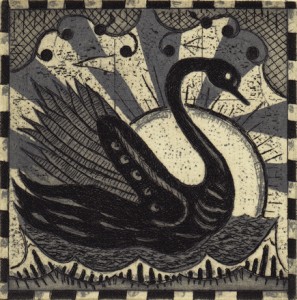 Los Angeles is rather beautiful at night—kind of a fleet dark animal festooned with signs and lights, as well as the never-ending roar of the automobile. It used to be hard for me to think of it as a city. It always seemed more like an endless labyrinth of smaller towns, a web of connected tribes—strip-mall-type architecture has not helped the place at all. But then you get these breathtaking views of the place lit up at night, which you can see from Laurel Canyon or Mulholland Drive, and you finally understand that the sprawl must be taken as a whole to be understood at all.

Therein lay the beauty of the place. My favorite ride in LA is Sunset Boulevard from the Pacific Coast Highway all the way downtown—in this thirty-mile stretch one can realize the American story, circumstance and appetite in a kind of shorthand. One goes from the Penthouse to the outhouse and back in a minute. One minute you’re in tony Bel Air and a few short minutes later you find yourself among the walking wounded of East Hollywood. You roll by SkyBar and the Whiskey A Go-Go, where young men in hair bands, twenty years past the expiration date of this musical idiom, are still playing gigs to try and jump-start a dream. The cynical may dismiss and laugh at them, but I find them weirdly heroic if a little naive.

Sunset is where a bunch of clubs are. I believe this is where Lindsay Lohan got in trouble and Britney Spears wound up flashing her hoo-ha to the paparazzi. It seems a predatory place, full of the haves and have-nots, the could-have beens and the never-wills. Sad and beautiful, the American lament writ large.

I got here as the news was breaking that Roger Ebert had lost his long, furious battle with cancer. The portly kid from Urbana did not back up a step in the ten years of his illness; courage is too small a word. What happened to the writer was especially heartening—he wrote more than ever. He took full measure of his life and shared it with us, imparting the idea that none of us is promised a tomorrow and that each day is gravy—a bonus day.

I found it odd to be in Los Angeles, a one-industry town, a dream factory, when the one man who had the best purchase on its endless product was leaving us.

I don’t think anyone understood how movies and their lasting shadows changed us as well as Roger Ebert did. He was way ahead of the curve when he championed films like “Bonnie and Clyde,” its bloody operatic coda mirroring the America we lived in right then. A half a world away, young men, women and children—theirs and ours—were being slaughtered in the name of profit and “containing Communism,” and by the end of this whole sorry, misguided enterprise we’d changed as a nation. Ebert understood this, and also understood that the violence in Arthur Penn’s film was ugly and awful and wasteful, as violence always is. He also helped us understand it—that if “Bonnie and Clyde” was a mirror of anything, it was a mirror of us, We the People, 1967.

I knew Roger a little differently than most people. Thirty years ago, I stopped drinking; Roger had stopped years before this. When my career as an artist was beginning to take me on the road for shows, I’d panic a little as I didn’t know where the AA meetings were in those towns. At movie screenings I’d find a private moment and ask Roger where they were in New Orleans, New York, London. He not only knew of one meeting, but four or five in each town. When I’d get back he’d make sure and follow up and check in. He was especially kind to people who were newly sober. And if he got the feeling you were back-sliding, he’d talk to you like a Dutch uncle and administer a little tough love.

I love that Roger never gave up being first and foremost a newspaperman. He was one of our last links to those old pros who mattered, and shaped the way we thought about ourselves and our city: Royko, Kogan, Terkel, Algren, Simon, Schulian and on and on. How lucky we were that Roger sometimes filed five or six reviews a week, and sometimes op-ed pieces as well as other articles or think pieces—the guy worked like a sled-dog. He was one of those who shaped the discourse, who pushed the salient and intelligent conversation ever forward.

Knowing that the finish line was a lot closer than he’d have preferred brought out the best in the man and the writer. That he spent a half a century being the best film critic who ever lived still didn’t prepare me for how incisive, moral and coherent a writer he was about damn near every other thing that captured his attention. His blog became a must-read destination and Ebert one of the most voluble and strident political commentators out there. He shared, and in the last few years he allowed us to know him in an especially honest and vulnerable way. In these last years he taught us how to live and die with dignity, honesty and grace. Godspeed Roger Ebert and thank you for the wisdom. I now know the difference.

Nice piece, Fitz. It is ironic that this unstylish portly guy from downstate Illinois ended up being not only the quintessential Chicagoan but also the world archetype of the movie critic. You’re right to class him with Royko. But where Royko, the indispensable Chicagoan, was unimaginable ripped from the context of Chicago, Ebert was somehow quite comfortable as a world citizen. He was as at home in Cannes as in Old Town. Shows how quickly Chicago has changed since Royko died. One wonders what Royko would have made of the rivers of foreign tourists jamming Michigan Avenue these days. It’s… Read more »