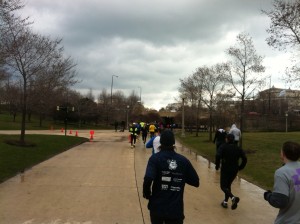 Breakdown:  Despite the race’s name, the Start Early 5K & 10K Run/Walk, now in its sixteenth year, didn’t start until 10am this morning, when it kicked off with a one-mile pledge walk, followed by the 5K at 10:15am and the 10K at 10:20am. That’s because, obviously, “Start Early” doesn’t refer to race times but to the beneficiary of the race. April is Child Abuse Prevention Month and the Chicago chapter of Prevent Child Abuse America coordinates this event to raise both funds and public awareness for their cause.

This morning, with the grass at the southwest corner of Columbus and Balbo saturated from earlier rain and the temperature sticking in the mid-thirties with dark clouds threatening rain and/or snow (a light snow ended up winning out), a late start was welcome. Both the 5K and 10K runs took place almost entirely on public paths, running through Museum Campus and along the Lakeshore Trail. The poor weather kept the trails from being too crowded with other runners but getting back to the finish line for the 10K became a game of navigating a slew of families heading to the Field Museum or the Shedd Aquarium.

Basecamp was a bit soggy with long lines (and rather surly volunteers) for day-of registration (all volunteers should be commended for being out on a cold Saturday morning, but they should also remember that they represent the group they’re volunteering for). Gear check was quick and friendly as were the numerous water stops along the course. A smiling young water-station worker offered me water “For free! You don’t have to pay for it!” The basecamp booths were a bit scarce, with Qdoba offering the best post-race rewards: breakfast burritos.

Course: Both the 5K and the 10K start and finish at Columbus and Balbo, with the 5K heading north at Museum Campus and the 10K heading south. From there both races follow the Lakefront Trail before circling back and recovering the same ground to the finish line. Well-marked with plenty of water and volunteers along the way.

Organization (gear check, etc.): Day-of registration volunteers seemed a bit annoyed with their lot (to be fair, there were a surprising number of last-minute runners), but everywhere else volunteers were happy to be there. Both races (and the pledge walk) started right on time, with runners filing out of pace chutes in an orderly fashion to get to the starting line.

Goodie Bag (includes shirt): Most of the price of admission here goes to Prevent Child Abuse America. A dark blue running shirt with an oddly placed logo was the only item in the goodie bag.

Weather: Colder than expected, with pre-race rain and during-race snow making for a chilly run. The sun came out for a few minutes around 10am, but once the clouds rolled in, thirty-five degrees felt a lot colder than it should have. (Zach Freeman)