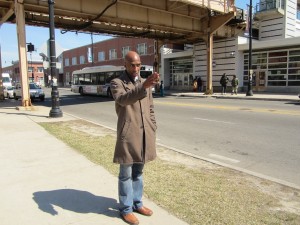 Most Chicagoans associate Englewood with poverty and crime, but local advocates and activists see it as a neighborhood with untapped potential, with excellent access to public transportation being one of the keys to its future success. “From the beginning, Englewood was designed to be a transportation and retail hub, and that does not come up often enough in the conversation,” says Demond Drummer, a resident who works for the Teamwork Englewood community development organization.

“The proximity to transportation is one of Englewood’s huge assets,” says Asiaha Butler, who works in the real estate industry and president of the Resident Association of Greater Englewood (RAGE). “It can help revive the neighborhood by providing individuals with access to jobs in other parts of the city, and it can encourage new retail here. But we need businesses to be smart and strategic by locating near hubs like 63rd and Ashland, and the 63rd Street Red Line Stop.”

Drummer agreed to meet me in the neighborhood to discuss the role sustainable transportation can play in bringing Englewood back to its former glory. “In its prime, it was the number-one, non-central-city retail locations in the entire country,” he says as we stand under the Green Line tracks by the Halsted/63rd station, another one of the community’s crucial transit nodes. Just north is Kennedy-King College, which relocated here in the mid-2000s; on the northwest corner is a twelve-acre vacant lot where the Englewood Shopping Center once stood before it was demolished in 2001.

Transit hubs like 63rd and Halsted should be a no-brainer for new business investment, but why did local enterprises like the shopping mall close in the first place? “It was an inward-facing shopping center where a parking lot was all you saw walking up to it, so that didn’t help,” Drummer responds. “But you also had retail consolidation, historic racism, redlining and divestment from the neighborhood, and the shutting down of the Green Line. [The line was closed from January 1994 to May 1996 for rehab work, and six South Side stations, several in Englewood, never reopened.] These things kind of created a vicious cycle of exodus.”

Still, Drummer is optimistic that Englewood can leverage its current and future transportation options, and even use its many vacant lots to its advantage, to make an economic comeback. Teamwork Englewood recently finished an eighteen-month land-use planning process with the city and the Chicago Metropolitan Agency for Planning. “It asked the question, what do we do in the neighborhood with all these vacant lots,” Drummer says. “With the city’s new Green and Healthy Neighborhoods initiative they want to centralize retail around our transportation hubs.”

Of course, the Red Line track rehab means that three of these nodes will be shut down from May to September this year. “That’s going to be painful, but in the long-term faster riding times will benefit everybody,” Drummer says. “We can ask, ‘How could they let the Red Line get so bad that we have to shut down the line for five months?’ But the fact is, the Red Line needs to be rebuilt, as well as extended further south.”

Drummer adds that there’s strong support for building bus rapid transit on Ashland as an additional high-speed, north-south public transportation artery. “That could have an amazing effect, because Ashland is one of our stronger retail corridors,” he says. “Residents in the neighborhood want BRT, and we’re reaching out to the business community.” Are people open to removing car lanes on Ashland to make room for dedicated bus lanes? “There are always going to be tradeoffs, but there are a lot of transit riders in this neighborhood,” he responds. “The densest northbound ridership on the Ashland bus line is from 95th to the 63rd and Ashland Green Line stop.”

The New Era Trail is another proposal Drummer, who also serves on the Mayor’s Bicycle Advisory Council, says could give Englewood a shot in the arm. “Having a ‘linear park’ where you could walk or run or bike would be great. It will attract more folks to retail and help be a backbone for some of the urban agriculture projects we’ve been talking about.”

Longtime community activist Jermont Montgomery echoes Drummer’s sentiment. “It would be very easy to turn that rail line into a ‘sky park,’” he says. “That would be a wonderful thing for the neighborhood. Right now there’s not as much interest in athleticism in this community as there is in gentrified parts of town. But I think that if you build it, they will come.”