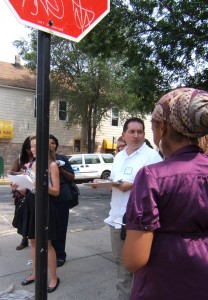 “The built environment plays a huge role when it comes to people being able to be physically active, ” says Grant Vitale, community programs manager for the Consortium to Lower Obesity in Chicago Children (CLOCC). The group, based out of the Lurie Children’s Hospital, is an association of many local, statewide and national organizations working to help kids maintain healthy weight levels by encouraging better nutrition, as well as walking, biking and active play.

The rate of childhood obesity in the U.S. has more than tripled over the last three decades, and in 2008 Chicago’s obesity rate for young kids entering school was 22 percent, more than twice the national average. In some neighborhoods, mostly low-income African-American and Latino communities, over half of all children are overweight or obese. These areas tend to have less green space and higher pedestrian crash rates than wealthier neighborhoods, which discourages active transportation and recreation.

Over the last two years, CLOCC has partnered with the Chicago Department of Public Health on a $5.8 million, federally funded anti-obesity campaign called Healthy Places. The program has focused on creating safe streets and parks, as well as creating healthier schools, eliminating food deserts and promoting breast feeding.

“Through Healthy Places we were able to provide financial support to ten community-based organizations across the city to implement community interventions,” Vitale says. “One intervention that we asked all the groups to implement was a walkability initiative. We trained them on CLOCC’s neighborhood walkability assessment tool, which helps identify barriers to walking and biking.” An assessment might show the need for traffic calming, like speed bumps, or infrastructure to make crossing the street safer, such as curb extensions or pedestrian refuge islands.

One of the community groups that Healthy Places funded was the Brighton Park Neighborhood Council, based in a predominantly Latino area on the Southwest Side, which wanted to make it easier for kids to access Kelly Park, 2725 West 41st. “Using our walkability tool, they looked at routes to the park,” Vitale says. “For example, they identified crosswalks that needed restriping. Many parents called 311 in an organized way and were able to get those crosswalks restriped in a short amount of time.”

CLOCC is now working with Strengthening Chicago’s Youth, a violence-prevention group, also based out of the children’s hospital, to create a tool for measuring violence levels in a neighborhood. “We’ve been getting feedback from residents saying, ‘It’s all well and good for us to work with you to change the built environment, but if we don’t feel safe going outside to go for a walk or go for a bike ride, that’s a problem.’”

The two groups are currently working with residents in West Humboldt Park to identify areas to pilot the violence assessment tool. “We would really like to have it as a module that we could add to our walkability tool, so that when we go to a community we can identify barriers to walking but we can also identify issues of violence and crime.”

CLOCC has been involved with a number of other safe streets initiatives. They’ve collaborated with the Active Transportation Alliance to establish transportation advisory committees in several wards, lobbying aldermen to improve conditions for walking, biking and transit. “Active Trans is the lead organization but we’re right there at their side supporting them because we have the reach in neighborhoods,” Vitale says.

The consortium has also helped spread the word about Active Trans’ Open Streets events, which have closed roadways to car traffic along the West Side boulevards, downtown and Wicker Park/Bucktown to make room for healthy recreation. CLOCC also promotes Play Streets, a program that holds block parties in low-income neighborhoods with activities ranging from Zumba to basketball to parachute games. “We try to drive—pardon the pun—traffic to those events so they get a good number of participants,” Vitale says.

Some of the highest-profile work that CLOCC has done for safe streets took place after a young woman named Martha Gonzalez was killed by a hit-and-run driver at 18th and Halsted in Pilsen in 2009. “As a result of that pedestrian crash and fatality, family and friends came together as the Martha Gonzalez Memorial Foundation, and now it’s a larger group of concerned residents, to really examine that intersection to see how it could be made safer,” Vitale says.

“They used our walkability assessment tool to identify barriers to safe passage,” he says. “For example, the walk signal wasn’t long enough for a young child or elderly person to get across, so they were able to lengthen the crossing time, and a few other changes were made. As a result of those initial changes they went back and assessed it again and found that some other things needed to be addressed as well. The traffic flow there is very significant. Speed is significant. So there’s still work being done there to make that a safer intersection—it’s a continuing process.”