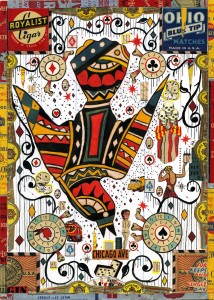 I’ve made more than a few tributes to the great Chicago writer Nelson Algren. His shadow looms large over how I see the city. Algren, of course, is the steely realist who will not let us bullshit ourselves about who we are. He is also the soft heart who is full of the gambler’s optimism about who we could be. He was a master of the gray; the good in the bad and the bad in the good. He also leavened his often sad and tragic stories with wry humor. He is also aware of Chicago’s propensity for eating its own. He often remarked that Chicago could not “love you back” and went to his grave believing this.

This is why I get pissed when dipshits from somewhere else attempt to tell us who we are. In his lifetime Algren never let us forget our inequities and cruelties—he saw Chicago for what it was—never mind the cheap boosterism or the “swagger.” When the New York Times Book Review ran its hit piece disguised as a book review a couple of weeks ago it sent me searching for writers who lived here, and their testaments to that experience. Algren never went easy on Chicago. Neither did the oral histories of Studs Terkel or the novels of James T. Farrell. Mike Royko certainly cut the city no slack when it came to blowing the whistle on crooked aldermen, shysters and even the mayor. We’ve never wanted for social critics among our own. Though I suppose we should be grateful that an associate professor from DePaul weighs in and lets us know how deluded we are in our little burg.

I don’t know anyone who lives here who does not despair of the crime statistics and murder rate right now. Who isn’t pissed off at the bone-headedness of our leadership, past and present. My neighbors are angry that the city no longer plows the side streets when it snows and that there are an army of mutants in neon vests handing out parking tickets, deserved or not. Cameras catch every bullshit traffic infraction under the sun, but none of the shootings, muggings or other mayhem.

We’re well aware of our ills; it’s not like any of us lets each other forget them either.

That said, I didn’t talk to anyone who was not a little wounded by the NY Times book reviewer’s assessment of our city. It was catty horse shit, clearly written to create some notice for its author. Well, she achieved her puny goal and got her popcorn-fart of a controversy—and now it’s over.

The city trundles on, its people carrying its burdens, joys and hopes forward—performing the sometimes heroic task of being decent citizens, in the face of those who would disparage them.

Once a year I reread “Chicago: City on the Make” and marvel at its sprawling and adventurous storytelling. It still moves like a freight train. It is still a bitter pill and a love letter at the same time. It is one of the primary texts of my lifetime.

Over the last couple of weeks, I reacquainted myself with some of the great novels of the depression and just after: Jack Conroy’s “The Disinherited,” Algren’s “Somebody in Boots” and John Steinbeck’s “Cannery Row.” It occurred to me that for all of the poverty in our country, there was certainly no poverty of the imagination or spirit among its artists. This awful period goaded a great many of our finest artists into their most challenging work. It kind of went across all disciplines: books, paintings, poems, music and dance. Artists went the length to speak to the condition of their world; they seemed to have a stake in their communities. Not the least of them was Algren. He wrote of the despair of the drug addict twenty years before William S. Burroughs became a junkie cult-hero mining the same subject. Algren was always ahead of the cultural curve; one of those who could see five miles down the road.

He lived in my neighborhood when he lived here, about five blocks from where I live right now. What is resonant for me is that some of my neighbors could have walked right out of “The Man with the Golden Arm” or “The Neon Wilderness.” There is still no shortage of the walking wounded in this part of town. There is also the city he remembered: Polish, Ukrainian, Slavic, Jewish and Italian and Irish–a city of tribes and bone-deep grudges. It is also the city where he gambled away most of what he made in his lifetime. Cards, horses, fights, ballgames—you name it, he bet on it. He would often joke to friends, “A gambler’s money has no home.”

When I walk down Chicago Avenue, my favorite street in the city, if I squint my eyes right around the old Goldblatt’s building, I feel like there is still a whiff of Algren in this town. When I hear soul music from a window or polka music, when I see the old Ukrainian lady on her porch in her housecoat smoking and surveying the street or the Old Style sign with “Zimne Piwo” under it, I realize they’ve not been able to gentrify Algren out of this part of town. His shadow is still here and still stands tall.