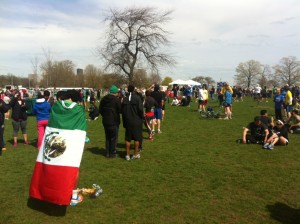 Breakdown: If there’s a better way to start off Cinco de Mayo in Chicago, I haven’t found it. Mostly following last year’s five-mile course from a blocked-off Simonds Drive north to Hollywood Avenue and back, this year’s Cinco de Miler kept everything that worked last year and even managed to improve on a few details.

The signature mariachi band was back (with a few additional members this time around) and the finishing chute was a bit more streamlined, curving around a cheering area and directing runners back to the post-race party. RAM Racing knows how to do swag and the race shirts were much improved: last year’s long-sleeve red and white running shirts were replaced with stylish dark gray cotton/polyester blends. The finisher’s drinking mug was replaced with a finisher’s medal that doubles as a bottle-opener (which runners could make use of immediately after the race at the beer tent).

While last year’s race had 4008 finishers, organizers were estimating this morning that today’s event had almost 7000. The four additional wave corrals (up to fourteen from ten last year) spoke to this expansion, and organizers seemed more than ready for this increase in numbers with a wide, well-marked course, plenty of water stations packed with volunteers and an especially large fenced-in post-race party area. The band El Guapo played an eclectic mix of covers for finishers basking in the sun, including “Ice Ice Baby,” “This is How We Do It” and “Hit Me, Baby, One More Time.”

Course: Starting and finishing in Montrose Harbor (but in different spots), organizers switched up the typical Montrose Harbor course and even closed down a few streets for the race. A lively eight-piece mariachi band made an appearance along the course.

Organization (gear check, etc.): Very smooth. Packet pickup at RAM Racing was quick and efficient, as was the gear check, food and beer pickups at the post-race party, and race corrals.

Goodie Bag (includes shirt): The shirt is a really nice cotton/polyester blend that’s sure to see plenty of wear throughout the summer. Race entry also includes two breakfast burritos, a churro, chips and salsa and a beer.

Weather: Just about perfect. High fifties and mostly sunny with a light breeze blowing off the lake. (Zach Freeman)