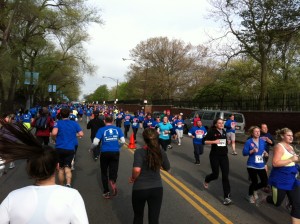 Breakdown:  For the eighth straight year, Chicago Cubs Charities organized the Race to Wrigley, a 5K through Wrigleyville that starts at the intersection of Addison and Clark and ends with a brief jaunt through the Wrigley Field ground-level concourse. After being warmed up by WGN’s Dina Bair and Danni Allen (winner of Season 14 of The Biggest Loser), the 3,000 or so timed runners (self-organized into pace groups) took off down a blocked-off Addison.

Organization along the course, including directional information and water stations were heavily attended and clearly marked, with a great deal of fanfare paid to the finish line area in front of Wrigley Field. The pre- and post-race party area in the space between Clark, Waveland and Wrigley Field was less well-organized, with a slow-moving and regrettably unsystematic gear check slowing things up and too many participants crammed into the space after finishing the run.

The entire course runs along wide streets (Addison, Ravenswood, Irving Park and Clark), which is a good thing considering the amount of runners that the race attracts. There were a few tight spots but, mostly the course feels big enough to accommodate everyone involved. The un-timed fun run along the same course (with roughly half as many participants as the timed event) started ten minutes after the timed run, creating a steady flow of finishers running through the concourse and under the arches of the finish line.

Course: Some were disappointed to find out that runners weren’t allowed on the actual field but looping through the Wrigley Field concourse and running down Addison and Irving Park is an impressive course on its own.

Organization (gear check, etc.): Packet pickup at Sports Authority was no problem but gear check was far understaffed, resulting in a lengthy line even as the race was starting. The pre- and post-race entertainment was exciting and blocking off some major thoroughfares was impressive.

Goodie Bag (includes shirt): The goodie bag includes the official race shirt, a rather unattractive blue and red polyester tee, and a blue runnersball from Athletico (basically an almost tennis ball with a list of workouts to use it with).

Weather: Low fifties with a mix of sun and clouds. A light wind chilled before the race but was welcome afterward. (Zach Freeman)