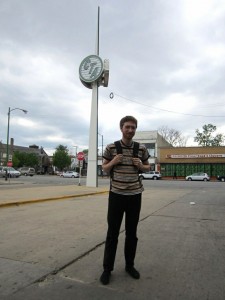 Danny Resner by the decorative spire at Ashland/63rd/Photo: John Greenfield

On Saturday, National Train Day, my El-racing brother-in-arms Danny Resner and I tried to write a new chapter in the saga of competitive CTA riding. The rules are simple: you must stop at and/or depart from every station by train, although it’s not necessary to ride every inch of track, and you can only travel by El, bus or shoe leather.

Several people, including Danny and me, have worn the CTA racing crown at various times. In October, ad men Chris Aubin and Garrett Sorrels set the current record for 145 stations: 9:12:39. We hoped to snag the title before the five-month shutdown of the south Red Line for a $425 million track rehab and station enhancement project, which starts this Sunday. Here’s how our day went down:

10am We begin our journey in Wilmette at the Purple Line’s Linden station, a stone’s throw from the Bahá’í temple. Last week a seven-month, $2 million slow-zone-elimination project started on the line north of Howard and we see yellow construction vehicles parked along the track as we roll south. Just before we reach Howard to transfer to the Yellow Line there’s an excruciating twenty-minute delay.


10:30am Finally we’re on the Yellow Line, heading to Skokie and back. At Howard we transfer to the Red Line and ride south. Around Granville I strike up a conversation with a guy with a big backpack and a couple of metal cargo boxes. He’s magician Sean Masterson, heading to a matinee performance at Theater Wit, near the Belmont stop.

11:30am At Belmont we switch to the Brown Line and ride to Kimball, the end of the line, where a bus immediately shows up to take us west down Lawrence, a melting pot of ethnic shops and restaurants, to the Jefferson Park Blue Line stop. “We’re having good bus karma,” I say. “You mean bus-ma,” Danny quips.

12:18pm At Jeff Park we hop the Blue Line northwest to O’Hare, then head back into town. We pass through the Loop and roll west along the Eisenhower Expressway. The Illinois Department of Transportation wants to build a forty-foot-wide flyover ramp a few feet from condos at 400 South Green. Residents have hung a huge banner facing the Ike reading, “IDOT—Don’t destroy our homes!”

1:50pm As we approach the Forest Park station, I begin stretching in anticipation of the 1.5-mile sprint we’ll make to the Green Line’s Harlem station. My knees throb as we catch the train back into the city.  At the new Morgan stop I hop onto the platform to snap a photo of the snazzy green glass awnings, then jump back on. “What are you doing?” scolds the female driver over the intercom. “Are you on the train or off the train?”

2:49pm After passing through downtown again, we head south on the Green Line and get stuck at Roosevelt for twenty more aggravating minutes due to track work, part of a $20 million reinvestment in the line in preparation for the Red shutdown.

3:29pm When we arrive at Ashland/63rd, instead of riding the train back to Garfield to transfer to the east branch of the Green Line, we hop a 63rd bus to the Cottage Grove station, take the train one stop west to King, then catch another bus back to the Red Line, which we ride south. A prerecorded announcement reminds customers about the upcoming shutdown.

4:35pm After tagging 95th, we ride back north toward Belmont. A young man is freestyle rapping along with music on his smartphone while his little brother grooves next to him. In the Loop, the car fills with passengers, including a dude in a Deadmau5 t-shirt with wraparound shades, a seatbelt around his waist and a Klingon action figure hanging from his neck.

5:32pm At Belmont, Danny and I switch back to the Brown Line and return to the Loop. We transfer to the Pink Line at Adams and roll into the West Side one more time. A mustachioed guy across the aisle from us is swigging a thirty-two-ounce can of Old Milwaukee.

6:36pm After passing by the colorful murals of Pilsen’s 18th Street station, we arrive at the 54th/Cermak stop in Cicero. My knees are killing me as we jog east to Cicero Avenue. There we catch a Pace bus to Midway Airport and the Orange Line, the last leg of our journey. Since we’ve already reached the 9:12 mark by the time we get to the airport, our hopes of setting a new record are dashed. When we reach our finish line at Halsted, the final time is 9:33:19, our slowest ever, and we feel a bit depressed.

Afterward in Chinatown, as Danny and I toast our challenging, if fruitless, day with cups of sake, we rationalize that there was no way we could have set a record with all the construction being done on the Purple and Green lines. However, since the Red Line rehab promises to slash twenty minutes off the round trip from 95th to the Loop, we look forward to clocking our fastest time ever once the work is complete.