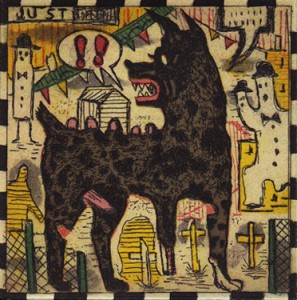 Driving back from California through the desert, one is always cognizant of the hungry world that surrounds you. The desert may seem still, but beyond what you can see it is teeming with life: coyotes, owls, hawks, vultures and some genuinely scary-ass reptiles, thick western diamondbacks, prairie rattlers, gila monsters and sidewinders.

There are small boars called javelinas—ugly little fuckers who love-you-not. There are roadrunners who tear along the desert until they find a lizard to peck to death and devour. They are psycho-looking sons-of-bitches who remind us that for all of the cute photos of baby seals and shit like that, that nature is around-the-clock murder. Look into the eye of one of these ground-dwelling birds and one sees all of the madness in the world.

There are prairie dogs who all of the predators rely on for food. They are reliable because they are dumb motherfuckers with a brain the size of a BB. They are forever getting picked off by everything that flies, walks or crawls. They’re like a more stupid version of rabbits, without the dork ears. One of them will get nailed by an owl and all the other assholes will gather round to watch, in essence ringing the dinner bell for the other predators. On observing a prairie dog colony, one wonders how they lived this long.

All over the Southwest there are packs of feral dogs. It is about survival; there is not a right or a wrong in nature, merely consequences. In fact not just there: around Hunts Point in New York City there are packs of wild dogs as well. They think and act as a group, the way a hungry group thinks, in essence almost becoming one large dangerous organism.

It is one of the few parts of the country where one still sees scarecrows. They have an innocuous enough definition at first glance—ostensibly they are there to scare off birds. Bullshit. They were mostly there to scare off other people—hobos, marauders, road-agents, as wandering bands of nomadic thieves were called back a hundred years ago and through the Great Depression. Even then they were talismans meant to signify an object lesson, much the way Christians were crucified 2,000 years ago. This was the newly minted America enforcing its ferocious sense of boundary, reminding interlopers: This land is mine, I stole it fair and square.

During a long road trip it is easy to see why the American landscape has been the mythic center of so much art and music and literature. It is one place and a thousand others, full of contradictions, ruptures and digressions. When you see the Grand Canyon or the Petrified Forest or the Painted Desert, these geographies evoke not only other places in the world, but alternate landscapes in the universe as well. It is the other-worldliness which captivates us. Parts of the red-clay desert seem like Mars; West Texas can feel like the craters and arroyos on the moon, or several moons. The ferocity of rivers can be genuinely frightening, and where the Rio Grande is three inches deep a source of puzzling contradiction and odd sadness.

I started taking road trips years ago, mostly to get off the grid and remember what is good about the country that now, more often than not, confuses me. There are still places in America where geography is almost destiny. If you’re born on a farm in Montana, there is a good chance you’ll become a farmer, or a rancher. If you’re born to a family of Cajun or Vietnamese shrimpers in Louisiana, the same thing. Our landscape has provided for us an embarrassment of sustaining riches. That we’ve polluted it, poured concrete over it and stuck ugly shit all over it? Well as they say on TV, that’s on us. I’m learning nature at a late age, incrementally, moment by moment and it has been enlightening.

The great thing is there is still so much to be awed by. If you’ve never been to a freshwater spring, or even know what it is, Wakulla Springs in Florida, about forty miles south of Tallahassee, is lousy with alligators, ospreys, garfish, rays, mullet, cottonmouth and all other manner of swampy life. It makes one grateful for Florida, whose politics and slimy tax-dodge laws have always made me think of this state as America’s dick.

The point of this column is to tell you when you’re sick of the murder rate, the parking-meter horse-shit, Rahm, the neon-wearing douchebags with their ticket-books, the hopelessness of the Cubs and, sadly, the Sox?

Take off, even if it is just to the lake. Roll your pants up and let the water touch your bare feet. Stare out at the waves and let their amniotic rhythms lull you into something slow and peaceful. Go to Lincoln Park and stare at the ducks, or at the hedge and marvel at the birds. Let nature tell you its story and help heal you, because it will.