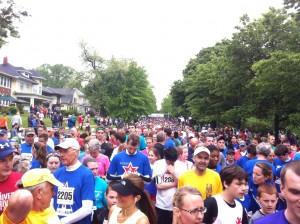 Breakdown: This morning’s race in Beverly’s Ridge Park marked thirty-six years for the Ridge Run, Chicago’s oldest 10K event. And for a Chicago transplant who has probably spent only a few hours south of 60th Street in the past five years, the Southwest Side neighborhood of Beverly (also known as Beverly Hills, I’m told) sounded like a distant and mysterious suburban land until I ran through its streets this morning (twice).

See, the Ridge Run has a unique (as far as I know) option for racers. while many races provide more than one distance option at their event, the Ridge Run offers a 10K at 8am followed by a 5K at 9:30, and gives runners the option of registering and running both distances in a single morning (it’s called the Ridge Run Challenge, and I highly recommend it).

As individual races, both the 10K and the 5K are enjoyable and worth the trip. If you’re just doing one, I’d take the 10K over the 5K; the field is less crowded and you get a better tour of the neighborhood. The 5K is fun but organizers should consider setting up pace groups to help people self-organize; any race with more than 1,000 people needs a bit of coordination at the starting line.

Course: Starting and finishing on South Longwood Drive near Ridge Park, the clearly marked course followed the wide neighborhood streets through a bevy of lovely houses (and a surprising amount of hills). Getting to Beverly by CTA now that the Red Line is shut down south of Roosevelt can be a time-consuming endeavor, but there is a Metra stop near the park and also a large parking lot and plenty of street parking.

Organization (gear check, etc.): The race website warned of long lines at race-day packet pick-up but an army of volunteers (and perhaps a lot of pre-race packet pick-ups) meant I was in and out of the commandeered gymnasium in a few minutes with my bibs (yes, two), shirt and goodie bag. Lots of water on the course and a smooth start and finish.

Goodie Bag (includes shirt): The blue racing shirt is especially nice, with the design taken from the winner of the annual t-shirt design contest. Not much else in the goodie bag.

Weather: Though it was raining during the 10K, the mid-fifties weather still felt refreshing. The rain had stopped by the time the 5K started. (Zach Freeman)