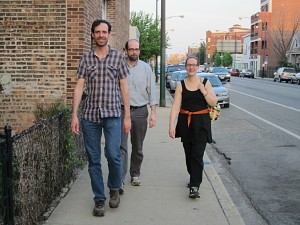 Rob Reid, Mike Filipski and Elisa Addlesperger on the 2900 block of North Elston.

I’ve walked the whole length of eleven Chicago streets in order to experience aspects of local geography, architecture and culture that I might have overlooked using faster modes. So when Rob Reid, who writes the history blog Avondale Time Machine, invited me to join him and friends to hike all 9.5 miles of Elston Avenue last month, I couldn’t refuse.

The street’s namesake was Daniel Elston, a London merchant who immigrated to Chicago in the early 1800s. By 1830 he’d bought a 160-acre parcel in River West, located along a crooked wagon road. The multitalented settler established several businesses—making soap, candles, bricks, beer and whiskey—he also served as a school inspector and alderman.

While Elston was first living by the thoroughfare that would later bear his name, it was a plank toll road owned by Amos Snell, who charged travelers two-and-a-half cents per mile to use it. Displeased with this, local farmers staged a Boston Tea Party of sorts—they dressed up like Indians, chopped down the toll gates and burned them.

Nowadays, Elston Avenue parallels the Kennedy, and it’s popular with drivers who want to avoid expressway traffic jams, but it’s also a relatively mellow bike alternative to hectic Milwaukee Avenue. Elston and Milwaukee are the only two streets in the city that intersect twice; pedaling north on one and then returning via the other is a circuit called “biking the knife”—the reason is obvious if you look at a map. 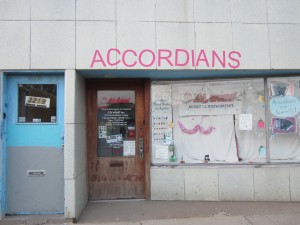 I show up at the southern intersection of the two streets, just north of Chicago Avenue, a few minutes after the 5:30pm meeting time and don’t see Rob and company. Assuming they’ve already left, I start strolling north on Elston solo, hoping I’ll catch up with them at a tavern a few miles up the road.

Just before Division, Elston begins curving northwest. I pass by the Morton Salt umbrella-girl logo painted on the roof of the company’s massive riverside factory, and then arrive at North, where men with cardboard placards are asking motorists for change under the rotating sign for Stanley’s Produce, featuring the founder straddling a watermelon-shaped airplane.

At Cortland I pass by the glamorous Star Car Wash, and soon come to the Horween Leather factory, 2015 North Elston. One of the oldest tanneries in the country and the only one left in Chicago, it’s the exclusive supplier of leather for NBA basketballs and NFL footballs.

A few blocks later I’m at Elston/Fullerton/Damen. To reduce congestion for motorists, next year the city will spend more than $36 million to reroute Elston through what’s now the front lot of the Vienna Beef hotdog factory so that it bypasses the junction. 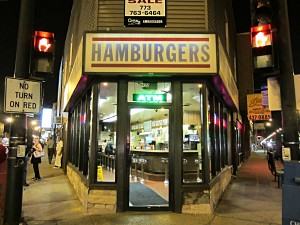 I catch up with Rob and his friends Elisa Addlesperger and Mike Filipski at Frank and Mary’s Tavern, 2905 North Elston, an old-timey Avondale pub. Beneath stuffed deer heads, mounted bass and the famous “Avoid street congestion” poster for the El, we raise a toast to Daniel Elston’s 223rd birthday.

We continue into the hot spring evening as the setting sun turns the sky a soft pink. Rob takes us a bit northeast on Nelson to check out the ruins of the old J. Greenebaum Tanning Co. building, which burned down last September. “It was a brick building, but there were probably a lot of residual oils in the floorboards,” he explains.

Up the street at 3219 North Elston is Alywind Musical Instruments, a careworn storefront labeled “Accordians” (sic) in off-kilter pink vinyl letters—Rob recently invited owner Bea Zimmerman to play squeezebox with his folk band the Astrohillbillies. A firehouse at Roscoe features a Japanese-inspired garden with a little bridge and a Koi pond. “Firemen have a lot of time on their hands between calls,” Rob notes.

Phixx606Cycles, 4075 North, is a new shop specializing in custom fixed-gear bikes for a young, Latino clientele, reflecting the growing popularity of the affordable, speedy cycles with inner-city youth. Nearby, teenage girls are hanging out on the sidewalk in plastic chairs, enjoying the sultry, ink-black night.

The Two-Way Grill, a slender greasy-spoon wedged between Pulaski and Elston near Montrose, is reminiscent of Edward Hopper’s “Nighthawks.” This area is also home to Chicago’s North African community, anchored by the Muslim Community Center, 4380 North Elston, with several Moroccan, Algerian and Tunisian shops, restaurants and bakeries. 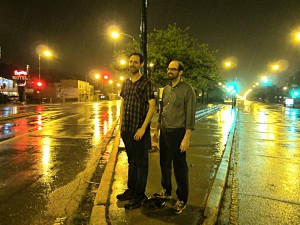 Rob Reid and Mike Filipski at the northern intersection of Elston and Milwaukee.

Soon after we cross the Edens Expressway, at Foster, Rob takes us just west to Rabbits Bar & Grill, 4945 West Foster, a friendly dive with an excellent craft-beer selection. After we belly up to the bar, a thunderstorm materializes out of nowhere, with rain blowing at a forty-five-degree angle. Elisa, a bit delirious from all the walking, phones her husband for a ride home.

At last the guys and I reluctantly venture into the downpour. We trudge past a DMV facility, the CTA’s Forest Glen bus garage, and a seemingly endless series of squat, beige postwar two-flats.

Finally, drenched, we reach the northern juncture of Elston and Milwaukee, at about 6200 North. The Milwaukee bus has stopped running, so the flickering neon of the adjacent Esquire Motel flophouse beckons me to rent a room. Fortunately, we’re able to score a cab, and I’m soon warm and dry in my own bed.