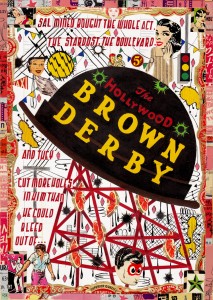 When I was a kid, and in a hurry to assert my masculinity, I made stupid remarks about gay people and indulged in the unfocused and thoughtlessly cruel bigotry of my peers. In other words, before I actually knew anyone who was gay. What I did not know is that there were gay people all around me and these remarks, however offhand, said a great deal more about me than anyone else. The words callow and stupid come to mind.

Thankfully, I came up in the world of art where there was no shortage of gay folks who wanted precisely the same things in life that I did. It opened my eyes and made me regret the stupidity and ignorance I’d harbored. A good many of these people were heroic: Dr. Ron Sable, the Chicago physician who was one of the first activists on the frontlines of the AIDS crisis in the mid-eighties, Larry Kramer, who loudly refused to let gay Americans become marginalized as lesser citizens, Danny Sotomayor, the late cartoonist and ACT UP activist—these were brave people who I was fortunate enough to have known and, in the face of their struggle, they made the rest of America change with them. The gay and lesbian community still struggles with ridiculous and arcane and draconian laws that other Americans stopped having to address a long time ago.

The right to marry, really? The religious right claims that gay marriage is a threat to the institution of marriage. These bigots helped stall the vote for the Marriage Equality Act, just this past week in Illinois.

They’re not giving straight people enough credit either—most of us can fuck-up our marriages just fine, without any help from the gay community, thank you.

I’m enormously weary of religious fuck-tards inserting themselves into the politics that shape the way we have to live. And while I’ve been on the earth long enough to know these drool cases are not going to go away, or change, anytime soon, we can hold the politicians they wholly cowed into inaction responsible. Remember that these fuckers work for us. They are our employees, and at the ballot box we can un-employ their spineless asses whenever we see fit. The only thing that gets their attention is the idea that they may be pried off of the public tit—forcibly.

The religious nuts are not capable of change: once they’re convinced that their imaginary friend in the sky deems one thing or another, well, it’s off to the races to see who can wear the jauntiest tinfoil hat. When whole countries burn, they are the ones bringing the buckets of gasoline.

For the life of me I cannot figure out why religious Americans so fear gay Americans? Why denying civil rights to a large percentage of our citizens and, in their own parlance, our brothers and sisters, is suddenly okay?

Explain this to me, like I’m a six -year-old.

I’ve recently been working on a body of artwork about Hollywood Boulevard, and the sad and sometimes soul-crushing unrealized ambitions and desires of show business. I came across the murder of Sal Mineo, the great actor from the 1950s and sixties who was stabbed to death in West Hollywood in 1976.

Mineo had been nominated for two Academy Awards as a young actor: one for “Rebel Without a Cause” and another for “Exodus.” At some point in the sixties it became common knowledge that Sal Mineo was gay. He never really bothered denying it and pretty soon the work dried up. He’d get occasional TV jobs here and there but because he didn’t bother denying who he was, his career ground to a halt. At the time of his murder he was making something of a comeback and was quietly admired by a great many who hadn’t the luxury of coming out themselves.

His murder was covered in the most salacious and mindlessly cruel language one can think of. Tabloids quoted cops in referring to it as a “Homo-cide”; and there were inferences that he’d been murdered while soliciting sex from one of the many male hustlers in West Hollywood. It was the kind of ugly language that went out with Walter Winchell. Nobody in the press would get away with this today.

The truth of it was far less “Hollywood Babylon” like.

Two years later, a life-long shit-bird named Lionel Ray Williams was bragging about the murder to his cellmate and he was overheard. Williams was your garden variety mugger. His own wife furnished the cops with the murder weapon and testified against him. (So much for the strong bonds of heterosexual marriage.)

If not for his own need to boast, would have never been caught.

The damage had been done though—four or five people I asked about Sal Mineo said, “Oh yeah, he was killed by a rent-boy” or “He was murdered cruising for sex.”

He was murdered returning from the grocery store. He lost the best years of his career for not denying who he was. His reputation was befouled in death because it was an easy thing to do to gay Americans.

It occurs to me that somebody owes for this.