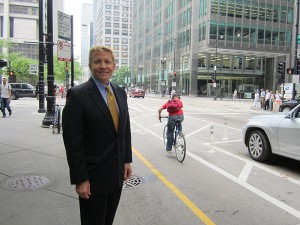 Second Ward Alderman Robert “Bob” Fioretti got a raw deal in last year’s ward remap. His district currently includes portions of several neighborhoods on the Near South and Near West sides, but in 2015 his territory will flip to the Near North Side, which means he has to win over a whole new set of voters in the next election.

Perhaps because he has an uphill reelection battle anyway, lately he’s had no qualms about going against the mayor’s wishes on issues ranging from charter schools to the renegotiation of the city’s reviled parking-meter contract. As part of a series of interviews with aldermen about their view on transportation issues, I recently had coffee with Fioretti downstairs from his law firm, a stone’s throw from the Dearborn protected bike lanes.

I thought you did a great job speaking out against the meter deal reboot. Your opposition was mainly financial, right, that Chicago Parking Meters could be making even more money from extended meter hours on other days?

One, they were still getting a good deal out of it. Two, it was almost as if we were putting the nail in the coffin for the long term here. It was a bad deal in the first place and now we’re ratifying it by making amendments to the contract. We’ve leased our sovereignty to an outside entity, and that has a negative impact on many things we do in the city.

I did vote for the meter deal the first time around. I had assurances from the [Richard M. Daley] administration that the money was going to be a long-term, rainy-day fund. [Most of the nearly $1.2 billion CPM paid the city was spent to patch the budget deficit before Daley left office.] That’s why nowadays I’m very hardcore that, when the administration says they’re going to do things, I want it in writing.

Ashland Avenue runs through your ward. What do you think about the city’s plans to do “bus rapid transit” on Ashland, replacing car lanes with dedicated lanes for high-speed buses?

I’m not sure yet. Conceptually it’s a good idea but I want to take a closer look at what they’re proposing, since it’s going to cost $10 million a mile. I use public transportation as often as possible—I have my CTA card in my pocket. The question is, how do we break the hold of the car on the minds of so many of our traveling public? People want safe, reliable, on-time transportation. When they believe the CTA is able to provide that, they’ll be willing to give up their cars.

What kind of support for the BRT proposal have you been hearing from community members and business owners?

Very little. I’ve heard nine-to-one against it, a lot of negative feedback. That’s why I think it’s very important to study this some more. The CTA has to show people the benefits of BRT and demonstrate why they would want to use it.

The Circle Interchange [of the Kennedy, Eisenhower and Dan Ryan expressways] is in your ward. The Illinois Department of Transportation wants to build a flyover ramp that would run right by a residential building at 400 South Green.

It would run close to several buildings and negatively impact Greektown. It would probably destroy the view of the National Hellenic Museum. I don’t know if the state is ready to compensate people for the loss in property values. We have condominiums nearby that are already under water and this will only make it worse. There are alternatives. I think they could build underground. I sent a letter to the governor and IDOT did consent to additional hearings on the project.

The Divvy bike-share program is supposed to launch by the end of the month. What kind of effect do you think that’s going to have? 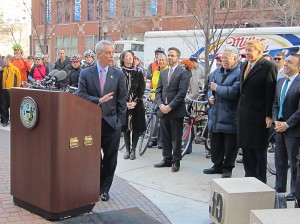 I hope it’s going to be a good program. If the people who use it are educated about bike safety and are comfortable riding on city streets, it will be a good thing for Chicago. It can help cut down the amount of pollution and help people get some exercise.

Do you ever ride a bike in the city?

I ride all the time. This morning I went out and took a ride. I started my Bike the Ward ride several years ago. It’s a historic ride: we visit several different historic sites, like the park where the Cubs won their last World Series [in 1908], the site of Mrs. O’Leary’s barn, and a Civil War prison camp where 6,000 Confederate soldiers died.

I saw you at the ribbon cutting for the Dearborn protected bike lanes in December. How do you think those have worked out?

To be honest, sometimes [the Chicago Department of Transportation] gets a thought in their mind and decides where they’re going to put bike lanes without really getting enough community input to see if they’re the best locations. I think we should be repaving the streets and making sure they’re safe before we put in bike lanes. There’s some potholes on Dearborn and there are some terrible drainage issues. They need to work on snow removal as well. You hate to hit a patch of ice when you’re on your bike.