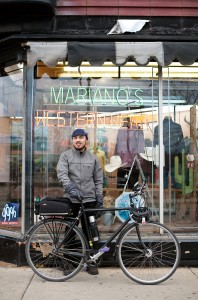 In 1969, more than fifty percent of American children walked or biked to school, but by 2009 less than thirteen percent did so. This lifestyle change has been a major factor in skyrocketing childhood obesity rates, an epidemic that has been particularly severe in Chicago’s low-income neighborhoods. The Safe Routes to School movement is working to reverse that trend by making it safe, convenient and fun for kids to walk and bike to school. I recently sat down with Genaro Escarzaga, the Active Transportation Alliance’s Safe Routes to School coordinator, to discuss the work he’s doing to help launch Safe Routes programs in twenty-five Chicago public schools.

Tell me about the Safe Routes initiative you’re managing.
It’s a part of Healthy CPS [an action plan with sixty strategies to improve the health of students]. In September of 2012, the Office of Student Health and Wellness at CPS received $4.38 million from the Center for Disease Control and Prevention as part of the Healthy Chicago Initiative [the city’s public health agenda with the goal of making this “the healthiest city in the nation”].

The goals of Healthy CPS include proper nutrition, healthy weight, eliminating tobacco use and social and emotional well being. As part of that, the school district is partnering with different vendors to promote physical activity. So the CPS contracted Active Trans to do the Safe Routes portion, which is basically trying to encourage physical activity before and after school. The schools really want to make sure children get sixty minutes of physical activity every day.

So what are you guys doing to promote Safe Routes?
About eighty schools were chosen as part of Healthy CPS, and twenty-five will receive our Safe Routes intervention. We’re going to help them develop a safe-routes action plan, with strategies tailored to that specific school environment, to make it better for walking and biking.

At each school we’re going to have a series of stakeholder meetings and, potentially, a public workshop with a brief presentation followed by a mapping activity, where participants identify barriers in their neighborhood that are keeping kids from walking and biking. Then we’ll try to work with the residents to develop ideas for overcoming these barriers.

Where are the twenty-five schools located—all over the city?
Yes. We’re as far south as Altgeld Gardens, and we’re as far west as Dore Elementary School, which is west of Midway Airport. Part of the selection criteria was determined based on Body Mass Index data. The Healthy Chicago report lists which neighborhoods have higher obesity rates. We also took into account crash data, and we also wanted to work with schools that Active Trans had existing community relationships with, because the public workshop process is really not successful if you don’t get a good turnout.

With the school closures that are happening now, that must have some effect on what you’re doing. Are you guys dealing with the issue of how to get kids safely to their new schools?
We’re not working directly with any schools that are “welcoming schools.” It’s come up at our meetings with schools that there’s some confusion between Safe Routes to School and Safe Passage, which is a program that focuses specifically on the security issue, whereas Safe Routes is kind of the holistic approach to get kids walking and biking.

What’s the timeline and next steps for what you’re doing?
The very first step is conducting arrival and dismissal observations and also doing a personal questionnaire where we assess the current situation with an interview. Through the summer we will be working with some schools that have a summer session, but our public workshops won’t really kick off until the first two months of the next school year.

Part of what I’m excited about is that I’m not aware of much Safe Route work being done in Spanish. But there’s a significant amount of Chicago schools with a Spanish-speaking population, and the administrators have already let me know we need to have a Spanish speaker for the presentations. So it will be a nice opportunity for me to talk about Safe Routes in Spanish and try to engage more parents through that, because ultimately that’s who you need the translation for—most of the kids already know English.

Crime is another issue in Chicago. How does that play into the Safe Routes plan?
It’s a major concern but, truthfully, I think people are making it out to be a bigger concern than it is. During arrival and dismissal times, I don’t know if it’s much of an issue because there’s so much traffic. But fear of crime could keep you from walking and biking. I noticed there are some schools where the environment seems fine for walking and biking, but there are still a lot of people dropping off their kids in cars. I think it’s more of a perception issue, because it’s not deemed safe, whether it be for crime issues or traffic reasons. We want people to understand the benefits of walking and biking to school, and also to recognize that the concerns that they have often aren’t as drastic as they seem.