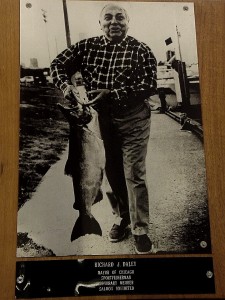 In 1970, Mayor Richard J. Daley told the Chicago Tribune that he wished to see the day when Loop workers fished in the Chicago River during their lunch breaks. During his twenty-one-year tenure as mayor, Daley adored rigging fishing tackle as much as his detractors relished in his gaffes as they tried for years to catch him for a different kind of rigging.

Today, a smaller city may have fewer potential anglers that could be tucking their ties into their shirts for a lunch-time cast, Daley’s dream is still a dream and the Chicago River water is probably the cleanest when it’s shocked green on St. Patrick’s Day, but the surrounding Lake Michigan waters have fared well due to years of politics that aim to give Chicago a healthy urban fishing culture and anyone interested in access to the classic arcadian hobby.

Many are surprised to hear that we have salmon, that they are big, and that they fight like mermen when on the line. You don’t need a boat—they run right off of the shore beginning each spring and you can catch them, eat them, or throw them back and then lie to an entire El car about how big it was because your phone was dead and you couldn’t take a photo. Every year, the Illinois Department of Natural Resources stocks approximately 865,000 salmonids in Lake Michigan—species that most will associate with Alaska, British Columbia, expensive grocery receipts, waxy taxidermy decor or your grandfather’s only story: Chinook “King” salmon, Coho salmon, lake trout, rainbow trout and brown trout.

Introduced in 1967, salmon were intended to prey on the alewife—an invasive fish that becomes the king of its playground, reproduces like time tables and then annually dies to smell on a beach—all in the hopes that the native trout populations would then rebound with the new lack of competition. The experiment worked, to a degree, the salmon flourished and now Chicago, the Midwest’s largest city, is home to the rare sport of city salmon fishing.

Perhaps nobody knows Chicago fishing like Henry’s Sports, Bait and Marine on 31st and Canal in Bridgeport—Mayor Daley’s home turf. Opened in 1952 by Henry Palmisano Sr., the shop is a family owned business that Sr.’s son and now co-owner, Steve, proudly calls the “watchdog of the fishing community.” For more than sixty years, Henry’s has survived four  moves in Bridgeport to become a piece of Chicago maritime history. The staff at Henry’s is especially interested in bringing first-timers or those who haven’t fished since that family vacation years ago to Chicago’s waters. Henry’s understands that it’s hard to get out of the city but that people still want to enjoy the thrill of the hobby. “People don’t know how to use the city. They’re intimidated,” says Steve when talking about lack of more recreational anglers in Chicago.

That’s why Henry’s is there—to make one of humankind’s oldest professions an enjoyable way for a Chicagoan to spend a weekend morning. For $15 a resident can purchase a 2013 license and, if you don’t have a rod, or don’t know how to use a rod, Henry’s is there to provide and teach. If you catch something big, consider entering it into the Richard J. Daley Sport Fishing Derby, which runs annually from May 1 to September 30. The contest is free to enter, open to the public and designed to commemorate the mayor’s mutual love for Chicago and fishing. As of the last week in June, at least one woman holds a spot on the leaderboard, a testament to the fact that Chicago’s fishing community isn’t limited to old men. As a city, Chicago is breaking stereotypes, offering women, men, children and everyone the chance to have an Alaskan adventure on the shores of their home. Outdoors enthusiast Ron Swanson, played by Chicago native Nick Offerman on NBC’s comedy “Parks & Recreation,” has some wisdom you can consider this summer: “Give a man, a fish and feed him for a day. Don’t teach a man to fish…and feed yourself. He’s a grown man and fishing’s not that hard.” He’s right. It’s not that hard.