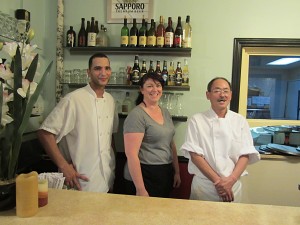 Sometimes transportation and food intersect in curious ways. On July 3, I received an odd phone call from Mako Koneko, co-owner of Torishin, my favorite izakaya (Japanese pub-eatery) in Mount Prospect. This northwest suburb, along with Arlington Heights and Elk Grove Village, is home to the region’s largest Japanese expat community. The tavern was a popular place for salarymen to hang out after work over drinks and delectable bar snacks, expertly prepared by her husband Toshiro “Tony” Koneko, a native of Niigata prefecture who’d worked there for decades.

Mako told me that Torishin recently folded after Tony moved to Rochelle, a small factory town in north-central Illinois, to cook at a new restaurant catering to Japanese employees at the Nippon Sharyo railcar plant. This news greatly disappointed me but, on the bright side, she invited me to an opening party the next day for the first Midwest branch of Ramen Misoya, a Japan-based soup chain, which was launching in the former izakaya space. I’m a huge fan of quality ramen, so it was a consolation that a noodle shop was replacing the beloved pub.

With no pressing Fourth of July plans and lured by the promise of free chow, I bicycled seventeen miles from Logan Square to the open house. You can view my route at tinyurl.com/RamenRide. When I arrived, there was a line out the door and almost everyone was speaking Japanese. Mako declined to discuss the details of Torishin’s demise, but she translated while I interviewed Yu Furukawa, the North and Latin America manager for the soup chain, which has fifty branches worldwide. 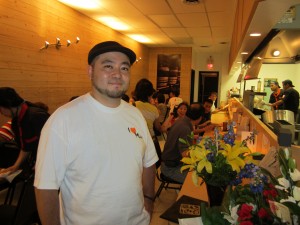 As the name suggests, Misoya specializes in ramen with a broth based on miso—fermented soybean paste—made in-house. Furukawa says the restaurant’s mission is to spread the word about the health benefits of miso, which the menu credits with everything from preventing cancer to removing freckles.

Santouka, a ramen stall in the food court of Mitsuwa Marketplace Japanese shopping center, located nearby in Arlington Heights, has often been cited as the region’s best ramen purveyor. “Santouka is OK,” Furukawa said. “But it’s inside a mall. Chicago is a big city but there are not many authentic Japanese restaurants. We’re offering the first authentic ramen in Chicago.” Aside from a few appetizers, the soup is the only thing on the menu.

I ordered the Hokkaido-style ramen, full-bodied miso broth and springy noodles, topped with three massive slabs of grilled pork loin, ground pork, bean sprouts, bamboo shoots, green onions, a miso-flavored egg and, reflecting Hokkaido’s status as an agricultural powerhouse, corn and fried potatoes. It was by far the best ramen I’d ever eaten and, after emptying the huge bowl, I rolled home through the sultry night in a serious food coma.

Intrigued by the limited info Mako provided about Tony’s new gig, I talked my buddy Jonathan into making a pilgrimage to Rochelle that Saturday to check out his restaurant, called Yoshino, and the railcar factory, which unfortunately is closed on weekends. We ride Metra’s Union Pacific-West line with our bikes to Elburn, a little town west of Geneva. From there it’s a thirty-five-mile pedal under sapphire skies past cornfields, wind farms and an orchard featuring Shizuka apples, a sweet Japanese variety. Check out our route, which included a few miles of gravel, at tinyurl.com/IzakayaExpress. 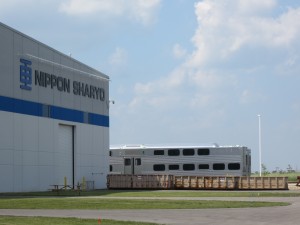 On the outskirts of Rochelle we stop at Nippon Sharyo’s massive, $54 million, metal fabrication and machining facility, which was built earlier this year. The Nagoya-based company already had 250 workers at an assembly plant here, which won a $585 million contract to produce 160 “Highliner” railcars for Metra Electric Line service. The expansion, which created about eighty new jobs, will allow the company to comply with federal “Buy America” requirements, since all manufacturing will be done domestically. The company was recently awarded a $352 million federal contract to make 130 bi-level cars for 110 mile-per-hour high-speed rail service in California and between Chicago and St. Louis.

A groundbreaking ceremony for the new plant in April included then-U.S. Secretary of Transportation Ray LaHood, Governor Pat Quinn, and Nippon Sharyo Chairman Katsuyuki Ikushima. To mark the occasion, the men used a marker to fill in one of the blank eyes of a large, red, spherical Daruma doll, representing the founder of Zen Buddhism. Traditionally, you fill in one eye when you begin an endeavor, and fill in the other once the goal is achieved.

While we’re checking into a cheap motel near Yoshino, Tony, a spritely sixty-two-year-old, rolls up on a bike on his way to work. When we introduce ourselves as Torishin fans, he’s surprised and delighted that we’ve followed him to Rochelle. After Jonathan and I clean up, we head over to the restaurant, a modest place whose kitschy decorations include a couple of ceramic “beckoning cat” figurines and a blonde, kimono-clad Barbie doll under a glass dome. 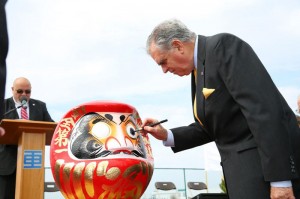 When Tony and sous-chef Ned Abdallah, a DeKalb native from a restaurant family who owns Yoshino along with his sister Jade, finish prepping for dinner, I ask them for more background on the place. Tony says many employees from Nippon Sharyo’s engineering and marketing headquarters, located across the street from Mitsuwa Marketplace, used to eat at Torishin. They invited him to cook for the new Japanese workers in Rochelle. “They asked me, ‘Tony, you want to go over there?’” he recalls. “I said no, too far.”

But the company ultimately won him over by offering to pay him a salary and benefits. “Business was not good at Torishin,” he explains. “We had almost ninety-five percent Japanese customers and some American customers didn’t like that. Kind of funny, isn’t it? I didn’t have much income, so I had to go.”

For his part, Abdallah, who had no prior experience cooking Japanese food and learned everything he knows from Tony, says that Nippon Sharyo’s offer to pay the chef’s salary took away some of the risk of introducing a new cuisine to a small rural town. “That’s a nice incentive to open up a Japanese restaurant, when you’re getting a free cook,” he says. “And Tony’s a professional—it’s not just anybody.”

Another carrot was the built-in business from the roughly forty Japanese employees at the railcar factory. Yoshino is only open for dinner; during the day the cooks prepare a rotating lineup of bento box lunches, which they deliver to the plant. The expats also sometimes eat dinners at the restaurant on weeknights but generally not weekends, since most of them live outside of Rochelle in larger nearby cities like DeKalb, Sycamore and Rockford. 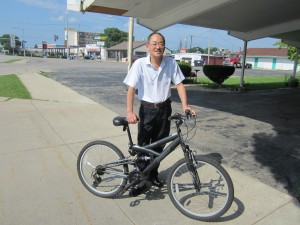 I ask Tony what he thinks of his new home. “It’s OK,” he says diplomatically. “The Rochelle people are interested in our culture and our food. Some of the older ladies wanted me to teach cooking classes, but I’m lazy.” That’s obviously not true, since he labors in the kitchen from morning to night, five days a week.

Tony says Yoshino isn’t an izakaya, and it doesn’t even have a bar to sit at. However, in addition to Japanese comfort food classics like sukiyaki, grilled mackerel, rice bowls and noodle dishes, plus a few sushi rolls, almost all of Tony’s terrific bar snacks are still available and are virtually unchanged. A few are in plain sight as appetizers on the menu, like hiyayakko, a refreshing bowl of cold tofu topped with grated ginger, bonito flakes and green onions; yakitori chicken skewers; and takoyaki octopus fritters.

But some of the most interesting small plates are only listed in Japanese on a dry-erase board which Tony walks me through. The specials include intriguing dishes like ankimo ponzu, cold monkfish liver in citrusy sauce; murasame mentaiko, sweet potato noodles with codfish roe; and maguro ika natto, which combines, tuna, squid and pungent, mucilaginous fermented soybeans.

As predicted, when the room fills up on this Saturday night, none of the customers are Japanese. Jonathan and I hold court in a corner table for several hours, sipping Sapporo, sake and shochu (rice vodka) highballs, observing the crowd, chatting with our knowledgeable waitress Jaclyn Thomson, and nibbling on an endless stream of Tony’s amazing Japanese tapas. 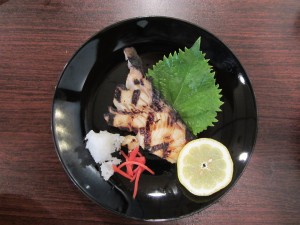 Some of the best ones we try include maguro shiso age, tuna wrapped in shiso leaf and deep fried; oroshi-steak, flavored with ginger and ponzu; and gindara-kasubke, a slice of black cod marinated in miso and charred on the grill. At the end of the night the guys send out complimentary dishes of red bean ice cream, fruit and cubes of clear agar gelatin, a delicious dessert.

Needless to say, by the end of the night we’re feeling no pain, and when Tony emerges from the kitchen to hang out, he also seems much more relaxed. Business has been brisk tonight and he’s optimistic about his future selling Japanese soul food in a blue-collar factory town. “We don’t make big money but we are doing good,” he says. “It’s not Americanized, it’s Japanese.”

RE: ” “Santouka is OK,” Furukawa said. “But it’s inside a mall. Chicago is a big city but there are not many authentic Japanese restaurants. We’re offering the first authentic ramen in Chicago.” Aside from a few appetizers, the soup is the only thing on the menu.” 1) Ramen Misoya is in Mount Prospect, a suburb of Chicago, which is fine but get it straight when making remarks like “We’re offering the first authentic ramen in Chicago.” Right. 2) Santouka is not authentic? It’s a Japanese franchise with locations around the world: http://santouka.co.jp/en/shoplist/index.html – how it ranks is another matter… Read more »

Thanks for the feedback. Kurumaya is awesome – very cute menu featuring watercolors of the dishes. Izakaya Sankyu is another great place in Mount Prospect. Karaoke House Nina in Mount Prospect is a fun bar that serves decent ramen. I’m also meaning to check out Sakura restaurant in Mount Prospect and Tensuke market in Elk Grove Village. So many great Japanese venues in the northwest ‘burbs, so little time!

[…] a less transportation-focused, more food-centric account of John’s journey to Rochelle, as well as a bike excursion to visit the ramen shop that replaced […]